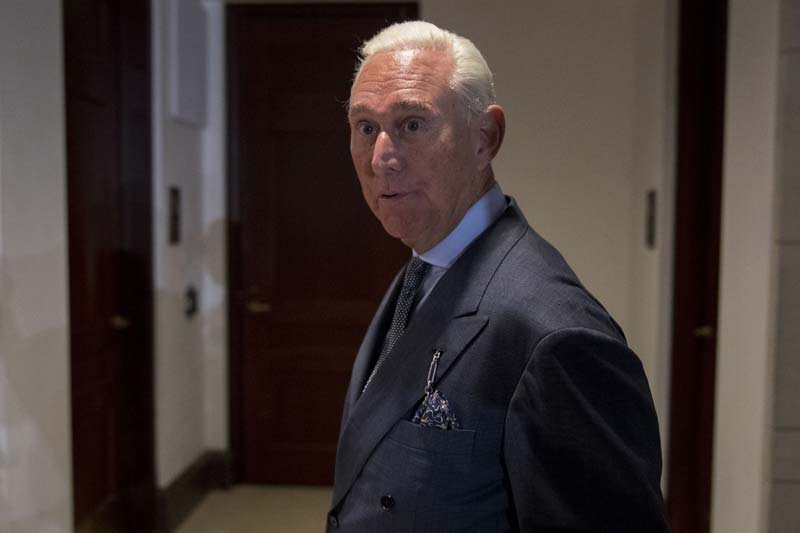 WASHINGTON - The special counsel investigation into President Donald Trump's longtime ally Roger Stone is pressing witnesses about Stone's private interactions with senior campaign officials and whether he had knowledge of politically explosive Democratic emails that were released in October 2016, according to multiple people familiar with the probe.

As part of his investigation into Russia's interference in the 2016 campaign, Special Counsel Robert Mueller appears to be intently focused on the question of whether WikiLeaks coordinated its activities with Stone and the campaign, including the group's timing, the people said. Stone and WikiLeaks have adamantly denied they were in contact.

Investigators have questioned witnesses about events surrounding Oct. 7, 2016, the day The Washington Post published a recording of Trump bragging about his ability to grab women by their genitals, the people said.

Less than an hour after The Post published its story about Trump's crude comments during a taping of "Access Hollywood," WikiLeaks delivered a competing blow to Democratic nominee Hillary Clinton by releasing a trove of emails hacked from the account of her campaign chairman John Podesta.

Investigators have been scrutinizing phone and email records from the fall of 2016, looking for evidence of what triggered WikiLeaks to drop the Podesta emails right after the "Access Hollywood" tape story broke, according to people with knowledge of the probe.

In an interview this week, Stone vehemently denied any prior knowledge of the Podesta emails. He said he did not play any role in determining the timing of their release by WikiLeaks or suggest they be used to blunt the impact of the "Access Hollywood" tape.

It is unclear whether the special prosecutor has evidence connecting Stone to WikiLeaks's activities. Assange could have concluded on his own that releasing the emails on that day would benefit Trump.

The results of Mueller's inquiry could answer the central question of his probe: whether there was coordination between Trump's campaign and Russian activities. Trump has repeatedly declared there was "no collusion."

In his interview Friday with the special counsel team, Bannon was asked about Stone's interactions with the campaign and instances in which Stone allegedly made private comments that matched his public declarations of having knowledge of WikiLeaks' plans, according to people with knowledge of the interview.

In a statement to The Post today, Bannon said: "Mueller's team has been very professional and courteous. Out of respect for the process, I will not discuss my interviews with them, but people shouldn't believe everything they read." William Burck, an attorney for Bannon, declined to comment.

Stone denied he had discussed WikiLeaks with Trump campaign officials.

"There are no such communications and if Bannon says there are he would be dissembling," he said.

Stone said he may have briefly discussed WikiLeaks's email releases with former Trump campaign chairman Paul Manafort, his longtime business partner, but only after Manafort stepped down from his post in August.

Last month, Manafort agreed to cooperate with the special counsel as part of a plea deal in which he admitted to two counts of conspiracy and obstruction.

Bannon - who was previously interviewed by Mueller's investigators for more than 20 hours in February - was also briefly asked Friday about potential obstruction of the Russia investigation by Trump, including the firing of FBI Director James Comey, according to people briefed on the discussions.

The special counsel and Trump's legal team are currently in a standoff over Mueller's request to question the president, a step Mueller has sought before completing a report that will be issued to Deputy Attorney General Rod Rosenstein.

A spokesman for the special counsel declined to comment.

Stone said he never coordinated with WikiLeaks, and that his tweets and public comments predicting a coming WikiLeaks release were intended solely to generate publicity that might help Trump.

"I deserve credit for hyping public attention, but not coordinating," Stone said this week.

The special counsel's focus on Stone appears to have intensified in recent weeks.

Among those who have been interviewed recently was Corsi, who has written about providing Stone with opposition research about the Clintons. He appeared last month before the grand jury investigating evidence in Mueller's probe, according to people familiar with the investigation.

Corsi's attorney, David Gray, confirmed last month that Mueller's team served Corsi with a subpoena that sought information about Corsi's communications with Stone in 2016 and 2017, and that Corsi planned to cooperate with the investigation.

Stone said in a text message Tuesday he had added prominent defense attorney Bruce Rogow to his legal team and had "passed" two polygraphs related to matters being investigated by the special counsel. The results of such tests are often declared inadmissible in court. ABC News first reported about the tests and Stone's new attorney.

For months, Mueller's team has been investigating public comments - and alleged private claims - Stone made in 2016 suggesting he had access to WikiLeaks.

Stone has said he was merely referring to public reports about Assange's plans and information he got from Credico, a liberal New York radio host who interviewed Assange on his show. Credico has repeatedly denied passing any information from WikiLeaks to Stone.

Stone recently added to his account, saying he had also been tipped about a possible coming WikiLeaks disclosure by viewing an email from James Rosen, then a Fox News reporter, that was sent to blogger Charles Ortel. Ortel confirmed to The Post that he'd forwarded Stone the email, in which Rosen said he was hearing a major disclosure related to Clinton was in the offing. Rosen declined to comment.

During the presidential campaign, Stone at times appeared prescient about WikiLeaks's strategy.

In spring 2016, before it was public WikiLeaks had received any hacked Democratic emails, Stone privately told an associate he knew the group had a treasure trove of emails that would embarrass Clinton and torment senior Democrats such as Podesta, The Post reported in March.

Later, in a widely reported speech to a Republican group in South Florida in early August 2016, Stone boasted: "I actually have communicated with Assange." Then, on Aug. 21, he tweeted, "Trust me, it will soon the Podesta's time in the barrel."

Stone has said his tweet was a reference to opposition research he got from Corsi about the business dealings of Podesta and his brother, Democratic lobbyist Tony Podesta.

A little before 4 p.m. that day, The Post had published its story about a 2005 recording of Trump talking in vulgar terms about women with Billy Bush, a host of NBC's "Access Hollywood" show.

The revelation set off a panic inside the campaign and some advisers feared it would end Trump's White House bid.

The first documents posted did not appear to be selected at random. They included an internal campaign document with quotes from Clinton's paid speeches to Goldman Sachs and major corporations the Democratic candidate had resisted releasing.

"On Oct. 7, the Access Hollywood tape comes out. One hour later, WikiLeaks starts dropping my emails," Podesta later said in an interview with NBC's Chuck Todd. "One could say that those things might not have been a coincidence."

This July, Mueller indicted a dozen Russian military intelligence officers of conspiring to hack Democrats, including Podesta, and leaking their stolen emails to WikiLeaks.

"I was on the street in New York," Stone said. "I was shocked when I heard this."

Stone was a prolific memo writer during the campaign, sending 1- or 1 1/2-page strategy missives to Trump via the New York developer's longtime assistant, Rhona Graff.

"She would print them out and put them on the pile," Stone said.

But by the time the "Access Hollywood" tape became public, Stone said, he was sending fewer memos than earlier in the campaign because he felt Trump's approach to the campaign had been firmly established and there was less need to offer guidance.

In fact, Stone said, he never discussed the "Access Hollywood" tape with Trump or the release of Podesta's emails.

However, Stone said in the wake of the "Access Hollywood" story, he aggressively pushed Bannon to mount a counteroffensive. He said he urged the strategist to have the campaign make a central issue of Clinton's efforts to protect her husband, former president Bill Clinton, from allegations of extramarital affairs and sexual assault.

A person close to Bannon said he does not recall any such discussion with Stone and denies Stone had anything to do with the campaign's decision to go after Clinton on her husband's treatment of women as a response to the explosive tape.

Stone said he had been pressing Trump and campaign officials to use that strategy for months, dating back to the period when Manafort was campaign chairman. But, he said, the candidate and key advisers had resisted.

Trump "knew my position," Stone said. "But I had stopped arguing with him."