Your clothes could be made in the USA again. No, really 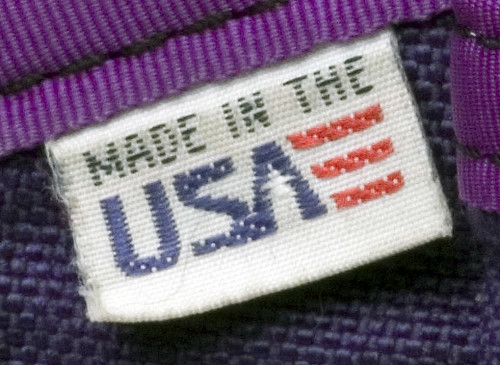 Europeans and Americans have grown used to buying clothes made in Asian countries. But apparel-industry sourcing executives are sure that's changing: By the middle of the next decade, much more of our clothes will be made closer to home.

China and Bangladesh are the two biggest suppliers of apparel to Europe. In the U.S., China and Vietnam are the top two import sources. But almost a quarter of apparel-sourcing executives who participated in a study by McKinsey and Germany's RWTH Aachen University said they expect more than half of the clothes they source to come from "nearshoring" in 2025. This means much of the production for Western countries will move out of Asia to these markets or to neighboring countries.

The makers of designer clothing have moved some of their production home in recent years to stress their heritage and increase control over supply chains. Burberry and other British fashion labels have moved some of their production as "Made in England" became attractive to luxury buyers after an import boom in the 1990s and early 2000s. Hugo Bosss, the German fashion label, has started selling a "Made in Germany" collection, produced completely (except for some fabrics) in Metzingen, the company's corporate seat.

Such "value-based reshoring," however, isn't an attractive strategy for low-priced and mid-range clothing producers. They must constantly look for a compromise between a low production cost and a short time to market.

In recent years, as wages rose in China, they've moved production to countries that are still relatively cheap, such as Vietnam and Bangladesh; in 2017, China's share of apparel imports dropped both in the European Union and in the U.S. But speeding delivery to market is an increasing necessity, and consumers are increasingly concerned about the low wages and high environmental costs of offshore production.

"Today, the industry is at a crossroads, where speed beats marginal cost advantage and basic compliance is upgraded to an integrated sustainability strategy," the McKinsey report says. Failure to respond to demand for an item consumers have seen on Instagram may mean huge volumes of unsold clothing.

Unable to tell consumers what they should wear, producers must treat short lead times as the No. 1 priority. Fast fashion is giving way to ultra-fast fashion, as practiced by online retailers such as Boohoo, Asos and Lesara. This doesn't work well with shipping from Asia: Delivery to big Western markets takes about 30 days by sea.

Besides, the Asian clothing market is growing, and eventually producers in China, Vietnam and Bangladesh will need to concentrate on delivering quickly to markets in their immediate neighborhood, creating a capacity shortage for Western buyers.

So far, higher production costs near the big Western markets are still an obstacle. McKinsey calculated that cheaper freight and lower duties already make it less expensive to produce a pair of basic jeans in Mexico than in China for the U.S. market and in Turkey for the German market.

But Bangladesh still significantly undercuts Turkey for the European market and matches Mexico's costs for the U.S. And moving production home -- to the U.S. and Germany -- is still a non-starter; it increases cost by 17 percent in the U.S. and by 144 percent in Germany.


But as lead times gain importance, shortening them compensates for some of the labor cost disadvantage by increasing the share of clothes sold at the full price. Raising it by 6.1 percent for a garment that takes 60 minutes to produce would justify the transfer of production from China to the U.S., McKinsey calculated.

Besides, automation can drive down the cost in Western countries. Now, sewing a pair of jeans takes an average of 19 minutes, more than half of the total production time. McKinsey and RWTH Aachen figure robotics can cut that time by 40 percent to 90 percent. At another important step, distressing the jeans, technology exists to cut the time necessary from about 20 minutes to 90 seconds: Levi's does it with lasers.

Eighty-two percent of the sourcing managers surveyed by McKinsey say the production of simple garments will be fully automated by 2025. If they're right, production is coming back -- but the jobs aren't. And China isn't likely to fritter away its current advantage even as it becomes more expensive: Chinese garment companies are building factories in cheap labor countries closer to Europe such as Ethiopia. With these caveats, it's likely that the buyers of mass market clothes, not just expensive designer threads, will be dressing in garments from geographically closer countries soon.