The Lunatics, the Asylum, and the Democratic Party 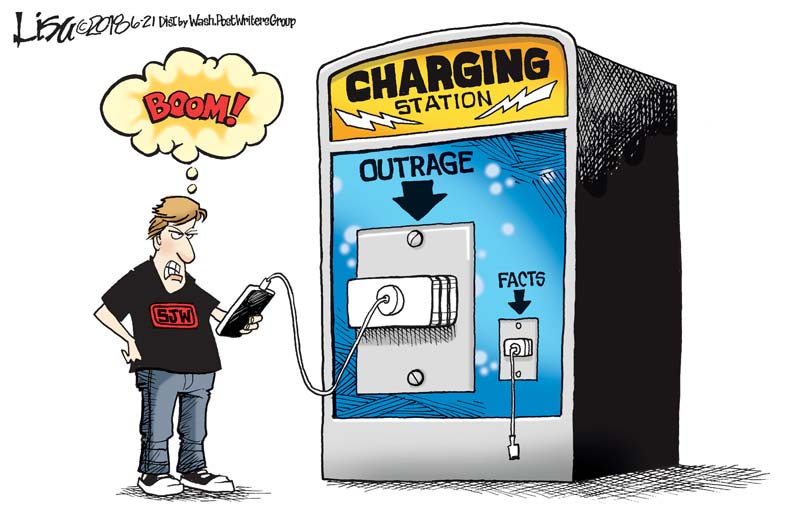 You know that old line about how the lunatics have taken over the asylum? Well, they have. And the mental institution under attack is the Democratic Party.

The nuts on the street — the progressives who block traffic and shout in the faces of conservatives, the ones who won't let Republicans have a peaceful meal at a restaurant, who sanctimonously yell "Shame" in the face of people who have the nerve to disagree with them, who form mobs to bang on the doors of the U.S. Supreme Court to show how unhappy they are with the newest Justice â€“ those are the ones who are now effectively calling the shots in what was once the party of JFK, Hubert Humphrey, Scoop Jackson and other middle of the road Democrats.

The latest battle started two seconds after Donald Trump became president when the resistance took to the streets with signs that said Trump is Hitler. Then it was scholars who made the same point in op-eds published by once respectable newspapers.

There was also Madonna telling a rally how she's thought a lot about "blowing up the White House"... and Kathy Griffin holding up what looked like the bloody severed head of the president.

There was Shakespeare in New York's Central Park where Julius Caesar -- dressed up in blue suit and long red tie to look like Donald Trump -- was stabbed to death to the amusement of the liberals in the audience who love that kind of stuff.


And now we have the unhinged tweets. A Google engineer put this one out after Judge Kavanaugh won nomination to the Supreme Court: "You are finished, GOP. You polished the final nail for your own coffins. F**K. YOU. ALL. TO. HELL. I hope the last images burned into your slimy, evil, treasonous retinas are millions of women laughing and clapping and celebrating as your souls descend into the flames."

Or how about this from a Minnesota school teacher: “So whose gonna take one for the team and kill Kavanaugh?"

You might write all of them off as fringe goofballs. But now we have the establishment joining the party, the old-timers fearing if they don't get their shots in, the angry base will devour them too.

"You cannot be civil with a political party that wants to destroy what you stand for, what you care about,” Hillary Clinton told CNN’s Christiane Amanpour. “That’s why I believe, if we are fortunate enough to win back the House and or the Senate, that’s when civility can start again.”

Get it? No peace in America until her side wins.

For a woman who's supposed to be smart, her remarks are breathtakingly dumb. If she's right that "You cannot be civil with a political party that wants to destroy what you stand for," then Republicans could make the same argument against Democrats, right?

Beyond that, what is she actually talking about? Is it OK with Hillary if progressives shout in Ted Cruz's face at a DC restaurant? Is it OK when women yell that a judge is a rapist absent even a shred of evidence that he is? Is she OK with left-wing screwballs shutting down traffic? Was it OK when the owner of a restaurant in Virginia told Sarah Huckabee Sanders and her husband that we don’t want your kind here?

What does no civility mean --- besides, "Look at me, I'm not really old. I'm cool, just like the young, hip radicals who think civility is an idea whose time has come ... and gone.”

Cue the horror movie music: It's starting to look like Hillary wants to run again. Yes, for president. She and Bill are about to embark on a post-midterm 13-city tour where they'll bedazzle their fans with their brilliant observations about all sorts of things like how deplorable you are if you didn't vote for her.

So here's some friendly advice, Hillary: It's never good when you sound like your fellow Democrat Maxine Waters, who also is no fan of civility and who infamously said: “Let’s make sure we show up wherever we have to show up. And if you see anybody from that Cabinet in a restaurant, in a department store, at a gasoline station, you get out and you create a crowd. And you push back on them. And you tell them they’re not welcome anymore, anywhere."

That stuff works in her Los Angeles district but it's no way to win over Americans who live between the blue parentheses on either coast.

And how about the former attorney general, Eric Holder who said when Republicans go low, "we kick them." Nice, coming from such an establishment figure, no less than the chief law enforcement officer of the United States under President Obama.

This apparently is what a Democrat who wants to be president feels he has to say to prove he's, you know, hip.

And let's acknowledge the unfortunate obvious: This didn't happen in a vacuum. Donald Trump set a nasty tone from the jump. He doesn't have clean hands in what we're now witnessing.

But what Democrats don't seem to understand is that decent Americans may not like Donald Trump's crude demeanor, but may think even less of the crazies on the left and their despicable behavior.

If Republicans hold onto the House, or at least hold off a massive blue wave, they can thank those progressive left-wingers who think civility is for losers. And they can also say thank you to every Democrat who wants to be president and thinks taking cues from the lunatics that are overrunning the asylum is the best way to get there.