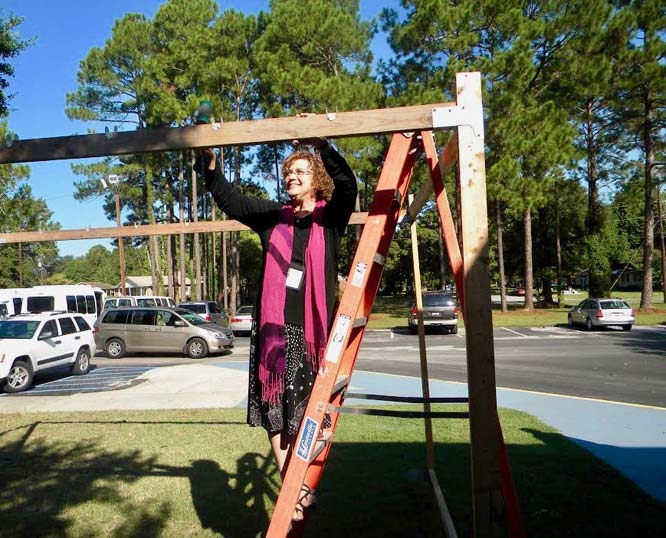 The ad for the sukkah booth read, "Idiot Proof. Can be assembled with simple tools in a few hours." How hard could that be? I ordered it for the small Midwestern Hillel where I was its Faculty Advisor.

This was more than 20 years ago, when my family had just begun building our own sukkah. We put up a small one in our back yard, following the directions in the First Jewish Catalogue. The plans were simple and only took my family 8-10 hours to complete.

A corner of the lattice had a hole, where my dog had chewed it off in his effort to attack a chipmunk that had taken up residence in one of the supporting cinderblocks. The sukkah leaned and swayed a bit, but hey, it never fell down. We actually were able to eat in it!

Clearly, I was ready to go on to bigger and better sukkahs.

The kit I ordered for Hillel promised ease and simplicity. Truth was, we found that over 30 people took 20 hours.

But we had been cheerful on that first day of our sukkah building project. The day was crisp and cool, as we unloaded all that fresh smelling lumber from a friend's truck and stacked it neatly.

The next day, we met to pre-drill the fittings and measure the wood. The day became cloudy and progressed into 25 mile an hour winds and cold rain, which turned the ground into a muddy mess.

After 3 hours, we went home, certain that only 2 more hours of work were needed. The blisters on my hands were going to be the last of my troubles, I thought.

But the next morning, I woke up in a cold sweat at 5 am, worried about how much time was really needed to complete the sukkah before our Hillel party. I hired 3 high school kids and took my almost 13 year-old-son down to do a "little" more work.

I re-read the plans and began to assemble the sukkah. We finished one side, and had two kids hold it. We began the third side when the 2X4's neatly slid out of the hardware and the entire frame collapsed.

We all stood, frozen as 16 feet of lumber and hardware sailed through the air and fell, missing the university building by an inch, crushing my tool box, cracking the center post, bending most of the hardware and smashing my plans for easily finishing the sukkah. My cold sweat returned.

We managed to get half the sukkah back up, tying all available posts to a nearby fence. Despite my lack of architectural knowledge, I had an inkling that twine wasn't meant to hold up a large sukkah. No wonder the Jews had to build a few pyramids and cross the Reed Sea with Egyptians pursuing them before they were allowed to begin the arduous task of building sukkahs in the desert.

In tears, I called this architect friend of mine, who was not only a professor of architecture but had built his own home. With all his expertise, he needed 3 hours to reconstruct the structural shell so we could untie the 2X4's from the neighbor's fence and the sukkah could actually stand. His comments on the "idiot" proof directions cannot be repeated here.

By 2:00 pm that Sunday, our sukkah was stable and ready for our Hillel party. The students hammered in the latticework, on the now squared sukkah, laid the schach roof, set the table inside and low and behold--we had a beautiful sukkah. Students, faculty and community members came. The weather was perfect and only a few bees joined the party.

I drove by the sukkah later that evening, just to check that it was still standing. It was. All the effort--the panic, the blisters, the hoursâ€”had been worth it.

Two friends had put up sukkahs for the first time this year as well. One broke down and hired a professional crew to put up her pre-fab sukkah. Originally shrieking that she would donate it to any one that would accept it, our friend agreed, as we sat in her sukkah one cool evening, seeing the full moon in one of the cracks in the roof, sipping wine and eating goodies, that this was what Sukkot was about: family and friends eating together, creating a sense of a timeless community.

That was during Chol Hamoed--the intermediate days of Sukkos. We pushed out of our minds the task of TAKING DOWN THE sukkah.

Jews who build sukkahs don't realize how lucky they are. They do not have to seek the thrills of riding the highest roller coasters, pay a fortune to go bungee jumping or test their skills on survival hikes.

The simple task of sukkah building tests the strength of marriage, the bond between parent and child, any mathematical ability one assumed one had, and the physical strength one (actually me!) had assumed that hours of daily exercise had produced.

In building a sukkah, assume nothing.

Previously:
• Who's Buried in Grant's Tomb? An Unlikely Story of Transformation and Repentance
• Healing and Cooking
• Celebrating denial?