Steady Tillerson is here to stay 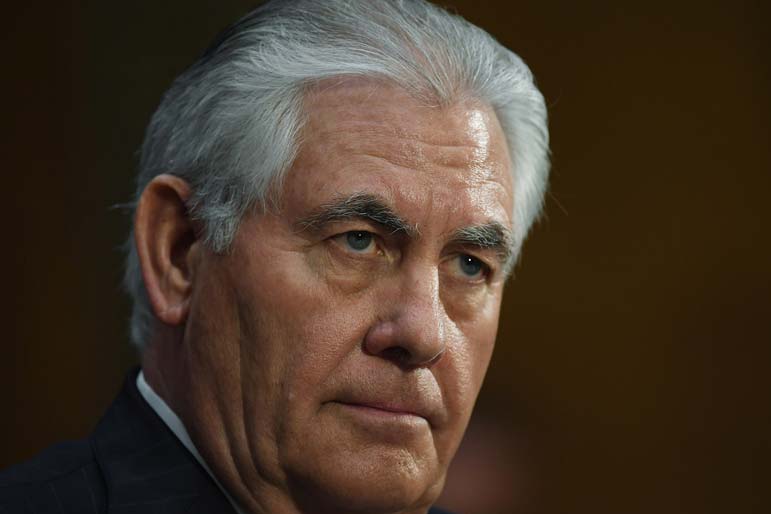 With multiple hurricanes and the Las Vegas massacre in the news, it is easy to lose track of the potentially looming North Korean nuclear attack on the United States.

The only news that has broken through on that front recently are headlines claiming something to the effect that President Donald Trump's heated language has undermined Secretary of State Rex Tillerson and that Tillerson should feel "undercut" and "contradicted" as a result.

Well, I don't see it that way.

The secretary of state felt it necessary to assert his adult presence within the realm of Washington media earlier today when he made clear that he is not going anywhere, and that he is unruffled by the childish headlines accusing him of calling the president names and having to be coaxed into staying at the State Department.

On the policy front as well, Tillerson's commitment to this administration's objectives is solid. I don't want to go so far as to suggest that Trump's reckless language is ever part of a larger plan to handle North Korea or anything else, but between the president's volatile nature and Tillerson's steady, sober, deliberate and professional demeanor, I think this White House has just as good of a chance of producing a breakthrough on the Korean Peninsula as any administration has in the past 30 years.

Tillerson is wise enough to let Trump be Trump and to leverage his unpredictability to the United States' advantage. By any measure, the president's threats - and seemingly impulsive character - has demanded the attention of the Kim regime, forcing it to take the United States seriously. And given this new reality, perhaps the "Rocket Man" has finally come to understand that just about the only thing standing between him and a regime-ending attack is Tillerson's reliable presence and deft hand.

Nevertheless, Democrats, their allies in the media and much of the Washington establishment continue to berate Tillerson for how he has handled his responsibilities. Criticisms such as these - a perfect example of which was published Wednesday in Politico, entitled "Rex Tillerson Is Running the State Department Into the Ground" - are typical.

But consider the source. The author, Nik Steinberg, worked for Samantha Power during her nearly four-year vanity project as ambassador to the United Nations while she was fully complicit in the Obama-era foreign policy that diminished America's relationships around the world, perhaps with the exceptions of only those with Cuba and Iran.

So, it should be no surprise that the author's primary complaint with Tillerson is that he has been insufficient in filling the State Department's organization chart and in empowering the very bureaucrats who dutifully implemented the failed Obama foreign policy. To say the least, it is bold to suggest that the same people who had contributed to the past eight years of foreign policy blunders should continue enjoying the same level of access and influence they had during Obama's reign. But moving on ...

Tillerson is a subtle, dignified man working in an administration that does not particularly welcome individuals bragging about their accomplishments. Perhaps that is why the administration's detractors have found him so easy to attack. But the fact is that Tillerson has conducted a significant amount of critical outreach and diplomatic maneuvering - particularly within Asia.

Tillerson has traveled to the region three times, and already twice to China. Senior leaders and Cabinet members have backed these efforts as well, with the likes of Vice President Mike Pence, Defense Secretary Jim Mattis and others reassuring allies in Japan, South Korea and elsewhere of the United States' commitment to the region. And as a result, sanctions are finally beginning to restrict trade with North Korea, and the international community's voice is nearly uniform in opposing the regime's nuclear ambitions.

With this renewed focus on directly addressing the United States' adversaries and aiding its allies, the administration has effectively replaced the Obama-era policy of so-called strategic patience with a Trump-Tillerson campaign of peaceful pressure. Tillerson may not work Washington or the media in the traditional ways, but he has been and will continue to be an effective leader at the State Department. And in reminding Washington of that at his news conference Wednesday, his firm commitment to the State Department is probably the best thing that will happen to Trump this week.

It is easy for the president's political opponents and the usual suspects in the media to criticize Tillerson. He inherited a department that was steering America into decline and pretending that everything that happened was the result of a carefully calibrated plan. Tillerson has the patience and maturity to deal with the world - and the State Department, for that matter - as it really is. The noisemakers should stand down and let him do his job.