One month to go, Donald Trump pulls a Houdini and revives his campaign 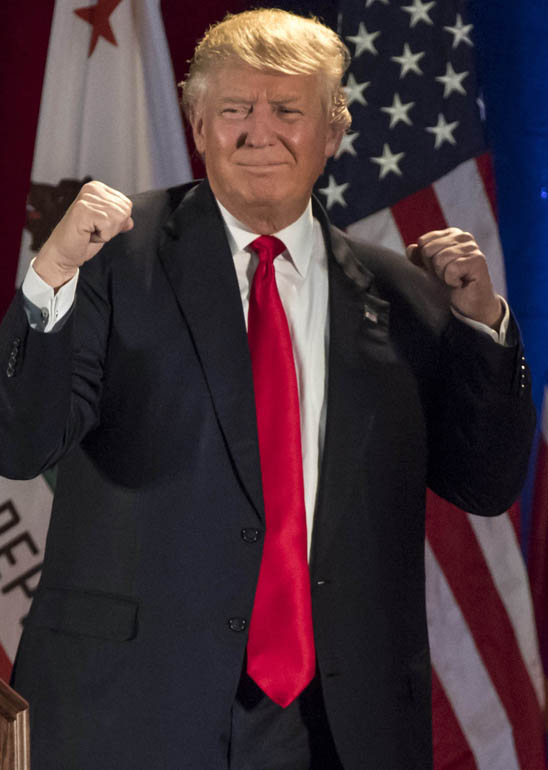 Donald Trump's Rocky-like debate comeback: How he attacked Hillary Clinton with a command of issue specifics. How focused he was recounting the nation's economic, political and foreign policy ills and tying her to them. And how Trump kept her on defense much of the night.

And, surprisingly, how complimentary he was at the end, saying he admired a fighter and she's a fighter.

Instead, we're writing about how the unmasked crude Trump merely managed to save his a-- within the deeply doubting party of Lincoln, whose members had begun looking for lifeboats a month out from E Day.

Strategically, Trump suddenly became the Prince of Pivoting, sometimes even pivoting from a pivot.

This second debate was personal, to be sure, like no Lincoln-Douglas debate almost exactly 158 years ago just upriver.

Trump's St. Louis performance was a Houdini-like performance worthy of reality TV scripts. You may not like Trump, like most people, but he attacked a tough female opponent without seeming a bully; that's no small achievement by our nation's double political standards.

And Trump showed he can learn when he thinks he must. Read a chunk of this Trump rally transcript from last winter. The rookie was virtually incoherent.

Trump was on target, attacking. He vowed to appoint a special prosecutor to reopen Clinton's email scandal, later suggesting she'd ultimately be in jail.

Trump critics pounced on the issue that a president would jail opponents. Sounds South American but overlooks President Barack Obama's imprisonment of Dinesh D'Souza and Clinton's fulfilled promise to jail the creator of that anti-Muslim video she blamed for Benghazi.

Trump ignored or deftly deflected her attacks, unlike last month, when he felt compelled to answer far too many in way too much detail.

Strategically, Trump suddenly became the Prince of Pivoting, sometimes even pivoting from a pivot. When she came on about his loopy 3 a.m. tweets, Trump brought up the unanswered 3 a.m. phone pleas for backup from the Benghazi battle zone.

For Trump, this debate sounded more like a primary encounter, with him nailing one conservative concern after another, reassuring any worried base. "I am looking to appoint judges very much in the mold of Justice Scalia."

Trump disdained the town hall chair, even pacing. Clinton used hers between answers. She matched his black suit, seemed mostly calm, smiled as she has practiced and went for the general election pitch: I want to be president of all Americans, whether you vote for me or not.

Trump stopped most of the bleeding from his own self-inflicted wounds. He looked plausibly presidential and, most importantly, like he really wants the job.

Now, if her campaign follows its pattern, another Trump video will emerge in a few days, as they did often to Obama in 2008 with the racist Rev. Jeremiah Wright videos. And there could be more WikiLeaks embarrassments coming for her.

Trump stopped most of the bleeding from his own self-inflicted wounds. He looked plausibly presidential and, most importantly, like he really wants the job.

He's stuck with his loyal base of pit bulls around 40 percent or less. That's better than 35 percent, but it won't win.

At their rallies on Monday, Hillary Clinton attacked Donald Trump for his 'weak excuse' after an old video leaked of him making lewd comments about women while Trump continued to label the conversation as 'locker room talk.'

It seems unlikely Trump's strong debate grew support in his weakest areas - blacks, Latinos and, most importantly, among women, more than half the electorate that didn't much like him to begin with. Trump apologized again for the sexual braggadocio on the video, which he said he'd never really done and was locker-room banter.

That kind of insecure talk is uncouth but not rare in such male forums. Thank goodness, females never discuss men crudely after drinks during girls' nights out.

But it is not presidential for either gender. It punctures the myth of president-ness stoked by an avid White House apparatus and a self-important media that enhances its own importance by treating him royally.

They're not, of course. We just don't want to see their weakness.

Recall Joe Biden's BFD gaffe on an open mic, among many; and George W. Bush's anatomical aside about one reporter.

Obama's also had problems caught by open mics - complaining to the French president about Benjamin Netanyahu's tiresome phone calls and pleading for political patience with Russia's president in 2012.

Then that revealing photo of Obama looking back admiringly at the derriĂ¨re of a passing Frenchwoman. Our president probably just had something in his eye.