Fix the debates by making them reality TV 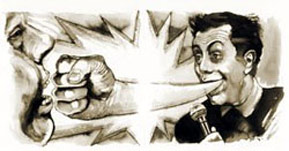 I really hate the presidential debates. I bet you do too. This isn't the first year they have been all but unwatchable. So I propose a handful of minor but useful reforms (for those who want to fix them) and a radical reform (for those who think them unfixable).

First among the minor reforms is more time for answers. Granting aspirants to the most powerful office in the world only two minutes to explain complex positions (and less time than that to rebut) is absurd. It tests no actual skill, unless we count the skills of memorizing lines or saying the first thing that comes to mind. Certainly the time limits leave no space for persuading the audience rather than simply stating a view. If we don't let candidates have at least eight minutes -- the standard for most forms of high school debate -- then we're doing more harm than good.

Second, there is no reason that the moderator has to be a journalist, and a lot of good reasons to pick someone else. The presence of a journalist on stage encourages our quadrennial round of dumping on the moderator for letting Candidate A get away with saying Y, as though what we call a debate is really a joint news conference, but with a higher power present to cry "Gotcha!" In a true debate, the moderator's voice is muted. It's understood that the purpose of the exercise is to hear the proponents of each side, not to hear the moderator. Pointing out lies or errors or inconsistencies is the opponent's job. The debaters argue; the moderator keeps time.

Third, if the moderators must be a journalists, perhaps they might ask questions that are actually challenging. Not "What do you say to critics who ...?" -- the current model, which essentially elevates the press and the post-debate television commentators into the relevant audience. Far better would be something like this: "Please tell us three important issues on which you believe the base of your party is mistaken, and why." Testing for courage and principle, in other words, rather than for the ability to deliver the snazzy one-liner. Or, we might consider giving the candidates the questions in advance, thus testing their ability to think a problem through.

But all of these, as I said, are mere reforms. We would do better to eliminate the debates in their current form altogether. They have little to do with skill at the job the candidates are seeking. So we should invite the candidates to showcase their abilities at pulling the levers of policy. We should see them at work with advisers. We should listen as they work through challenges and crises.

To that end, I would propose a far more useful exercise. The candidates come out onto the stage and are introduced. Perhaps they make opening statements. The moderator then gives them a scenario -- perhaps an international crisis, perhaps a natural disaster, perhaps a scandal in the administration. Each candidate retires to a separate conference room with a coterie of advisers. (Here we have two choices: We can allow each candidate to choose advisers, or we can supply those too. Each choice has obvious benefits and risks.) We the audience watch the interaction between potential president and staff, for at least half an hour each, possibly longer. As the deliberations continue, more information comes into the room, disrupting what everyone thought a moment ago. The crisis worsens.

The new information is crucial. Suppose, for example, that the scenario involves accusations that the attorney general, a close friend, has taken a bribe. Conscious of the television audience, the candidate might arrive in the conference room and announce theatrically, "Friend or not, he's fired!" -- thus proving fidelity to grand principle. Ten minutes later, we learn that the accusation is false, the inculpatory records planted by hackers believed but not certain to be Russian. In playing to the cameras, the candidate has acted too hastily. At that point a cyberattack begins on crucial infrastructure. It's a slow-rolling attack, and responsibility cannot be definitively determined. The candidate has to decide whether to fight back -- perhaps with a pre-installed logic bomb in an adversary's systems -- or wait.

Neither candidate would be aware in real time of what the other candidate was doing with the same facts. We the viewers would know; the people in the room wouldn't. (Yes, yes, we would have to find good ways to meet the obvious challenge of broadcasting both conversations simultaneously.)


We the voters would be watching, for once, not merely the final decision, but the way each candidate interacts with staff and deals with a deteriorating situation. Yes, the canned scenario might prove melodramatic, but given our obsession with 3 a.m. telephone calls, we might as well see how our candidates are at taking them. Or we could make the scenario less dramatic and more dreary -- for example by forcing aspirants and advisers to spend half an hour discussing how to spark economic growth.

However we structured the hypothetical scenario, we would be able to watch the process by which the candidates make their decisions. True, it wouldn't quite be real. But it would be a lot better than what we have now.

And there's one other advantage: It would make great television.