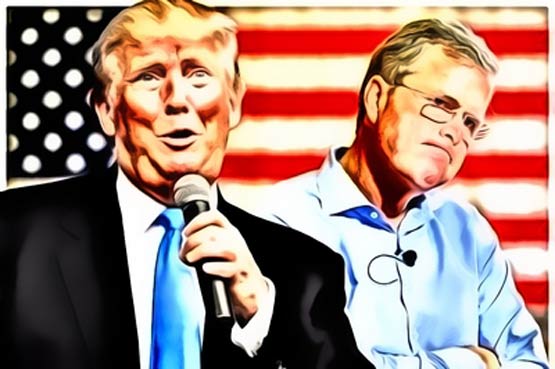 You cannot go wrong betting against conventional wisdom in this election. Right now conventional wisdom has it that Donald Trump, in championing the far-left-wing propaganda that President George W. Bush left us vulnerable to 9/11, has pulled off some masterstroke. Jeb Bush on defense! Jeb Bush re-litigating 9/11! I'm not so sure about that.

Let's start with the inconvenient Trump cheering - coming from Chris Matthews and other Bush-hating liberals. Really, this is the crowd from which Trump earns kudos? Also consider that George W. Bush remains very popular among Republicans. In May, a CNN poll showed that 52 percent of Americans and 88 percent of Republicans had a favorable opinion of Bush 43.

Moreover, it is total nonsense -- as many conservatives have pointed out -- to blame Bush 43, rather than focusing on the failure of the Clinton administration to deal with the rise of al-Qaeda.

As former vice president Dick Cheney has said many times, the fault was in the law enforcement paradigm that guided our pre-9/11 approach to terrorists and the refusal to treat prior acts of terrorism as acts of war. Trump either does not understand this or is so warped by his personal vendettas that he cannot articulate the position that the vast, vast majority of Republicans hold.

It is noteworthy that at his rally in South Carolina yesterday Trump did not bring up 9-11. Perhaps it is a topic he'd rather drop. And that is precisely why Bush should make an issue of it.

The problem for Jeb Bush in these Trump spats is not that Jeb Bush tied himself to his brother (Republicans like Bush 43); it is rather that Jeb Bush has seemed exasperated or hesitant rather than tough in responding to Trump. The one time he got it right was in the Reagan Presidential Library debate when Jeb Bush defended his brother. So how is he doing this time?

His response in a Sean Hannity interview should encourage his supporters. Asked about President Bill Clinton's missed opportunity to get Osama bin Laden, Jeb Bush replied:

"I think there's two ways to look at Islamic terrorism. One is a threat that has to be taken out as it relates to creating a strategy that calls it a war, or we view it as a law enforcement operation where people have rights. I think the Clinton administration made a mistake of thinking bin Laden had to be viewed from a law enforcement perspective. . . . [T]his is a war against Western civilization, and without the United States' leadership, this will be a problem for generations to come. I think we need to be much more forceful both here to protect the homeland as well as overseas to create a strategy to unite the world against this great threat. I don't believe Donald Trump has the capability of doing that." His recitation of recent history is correct and should remind Republicans that Trump is on the wrong team factually and politically on this one. How does he go after the Clinton-Obama-Clinton approach to foreign policy if he does not understand its consequences?

In that interview, Jeb Bush also gave a full-throated indictment of Trump's capacity to be commander in chief. "I mean, you have the Palestinian uprising incited by the Palestinian Authority. You have Syria in complete disarray. You have Iran's interests in the region on the [rise]. Russia now has as much or more influence than the United States in the region," he argued. "And we need a steady hand. We need someone that understands the grave threats and America's leadership in the world. And his view of history is just wrong."

Bush reiterated that attack, saying: "In the last month Donald Trump has said let ISIS [the Islamic State] take out Assad, then he said let Russia take out ISIS. He was happy that Russia is in Syria. That's not in our strategic interests to allow Russia to gain influence. They're barrel bombing the innocents. This problem is cascading throughout the region. There's a million refugees heading towards Europe." He insisted that Trump's "lack of understanding how the world works is what the problem is." Once again, he argued: "Russia has made this worse. And Donald Trump believes that Russia's presence is a good thing in Syria. It just makes no sense at all. He's running for president of the United States . . . He's running for commander in chief. He should have a policy that projects America's leadership and presence in the world, not to applaud [Vladimir] Putin for filling our void."

The question is whether Bush can now stick to that message - which simultaneously discredits Trump (and by inference the hapless Ben Carson) while projecting his own policy strength. Rather than get bumped off course by the next Trump insult, Bush would do well to stick with this topic, both in paid and earned media. Most important, in the next debate, he will have to make that case to and about Trump, not letting himself get interrupted or distracted. In short, he needs a "I paid for this microphone, Mr. Green" moment. And he needs to tell Trump to stop carrying the Clintons' water at the expense of historical accuracy, conservative policy and sound politics.

Jeb Bush is right on the merits, but he has to assert his position with force and confidence. This is not about defending his brother. It is about Trump's bizarre worldview, one that is based on his own personal grudges and nonsensical declarations. And it is about whether Trump has the stomach and the understanding to take his arguments to Clinton or Vice President Joe Biden.

If Bush does not sell himself as the top dog, the one who can take on the Democrats after knocking Trump off his perch, then Sen. Marco Rubio, R-Fla., Carly Fiorina or someone else will.