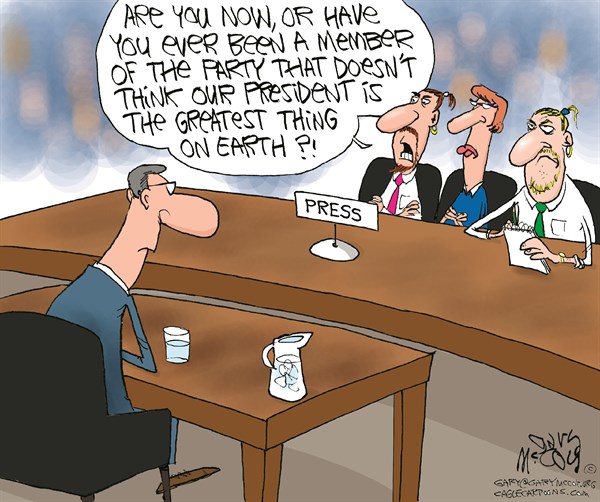 Hillary Clinton's performance art before Congress last week did not impress anyone who was not already inclined to slavishly adore her. While not quite as combative as her infamous "What difference, at this point, does it make?" testimony just a few months after the September 11, 2012, attack on the U.S. diplomatic installation in Benghazi, Clinton's most recent appearance was every bit as brazen, obfuscating, and deceitful.

Clinton took turns looking bored, annoyed and amused as the members of the House Select Committee on Benghazi (with the notable exception of Rep. Elijah Cummings) attempted to get to the truth about what actually happened the night four Americans, including Ambassador Chris Stevens, were murdered by Islamic terrorists, and whether anyone had ever been held accountable. (In case you didn't watch, no — not really.)

The press, of course, gave Obama the benefit of the doubt. It was only weeks before the 2012 elections, after all.

But now, with Hillary Clinton's "wiped" emails retrieved, we know the truth. Within hours after the attack, Clinton had told her daughter Chelsea that the attack was "planned" by "an al-Qaida-like group." Even more explicitly, Clinton told the Egyptian prime minister the next day, "We know that the attack in Libya had nothing to do with the film. It was a planned attack, not a protest."

That no security was available for the U.S. consulate in Benghazi — notwithstanding Ambassador Stevens' multiple requests for it — is incomprehensible. That Hillary Clinton now claims that Stevens was joking about security is even more absurd. But in many ways, the aftermath of last week's testimony has the most far-reaching implications.

It was proven that the administration had lied, for the most craven, politically expedient reasons. What response by the U.S. media?

It takes zero imagination to conceive of what the press would do if a Republican presidential candidate were exposed as having lied to the American public about an event in which four Americans died abroad, and then destroyed tens of thousands of emails to avoid those lies coming to light. (Consider Watergate — the peak of righteous political indignation in the Democrat universe: a break-in? A few minutes of erased tape? Pikers!)

A Republican would be eviscerated. It would be on the front page of the New York Times, the opening story of the evening TV news, the subject of innumerable blogs, social media commentary and editorials, with 24/7 coverage and a steady drumbeat calling for that person's head on a platter. Their presidential aspirations would be O.V.E.R.

But not Hillary Clinton.

We should not be surprised at any of this. It's the 1990s all over again. The Clintons' modus operandi has always been to deny, deflect, delay and, by the time the truth eventually comes to light, to wave the story off as "old news." The press — who controls the news — sees to it that it becomes "old news."

Nor is this a unique favor that the media performs for the Clintons. They will quite happily step into this role for any favored Democrat (or Democrat supporter), blocking the dissemination of damaging information that might negatively impact an upcoming election or reduce public support for a favorite policy or program.

President Obama lied — dozens of times — about Americans' ability to keep their insurance and their doctors? The press doesn't care.

Planned Parenthood is in the grisly business of selling aborted baby parts? Their physicians laugh and joke about it? The press doesn't care.

Abortion, like Democrat candidates' presidential aspirations, is sacrosanct. Before the current Planned Parenthood scandal, there was the story of the horrific butchery at Kermit Gosnell's abortion clinic in Philadelphia, which the media was happy to ignore as a mere "local crime story" until Democrat Fox News analyst Kirsten Powers shamed them in a now-famous USA Today editorial. The state of Pennsylvania hadn't inspected abortion clinics since 1993? The allegedly "pro-woman" progressive press didn't care.

With a handful of notable exceptions, the national media and its trusty reporters serve as the de facto "progpaganda" arm of the Democrat Party. This is already appalling. But it is made worse by the fact that Democrat politicians and operatives know it. They know that they can count on the press to cover for them.

This is deeply damaging to the body politic. A government that knows it can operate without the legitimate — and truly nonpartisan — scrutiny of a free press will quickly devolve into corruption and oppression. And the press, which the public should see as its advocates, its champions and bulwarks against that corruption, soon becomes mistrusted and despised.

Congratulations, members of the media. This is where you have brought us. And that is the real scandal.