The Republican War on Wusses, I Mean Women 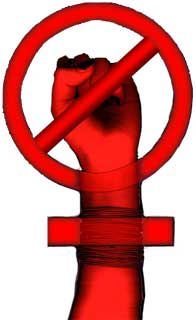 I'm not a fan of reality shows but my husband watches quite a few outdoor, wilderness and exploratory programs based in Alaska and the far West. The individuals on these shows are tough as nails and that includes the women who would fit right in with the pioneers of centuries ago.

I can't imagine any of these women whining about anything, especially about having taxpayers pay for their contraceptives or abortions. Democrats trot out the likes of Sandra Fluke and Lena Dunham to rail about how Republicans are conducting a war on women but real women recognize their hypocrisy of the feminist agenda.

Basically, in a nutshell it is---"I'm strong, I'm independent ... Fund me." Are there any real women in the Democrat party or are they all wusses?

The first time I appeared on Fox News was when I was contacted by Rick Folbaum after he read a column I wrote for rightgrrl.com, a conservative women's blog. Apparently I was the only one who was not or defending or sympathetic to Andrea Yates, the mother who drowned her five children. N.O.W. and Kathy Couric were promoting a defense fund for Yates.

My column was titled, "Oh That Poor Mother Indeed". I wrote:

"It wasn't till I read Anna Quindlen's article in Newsweek (Playing G0D On No Sleep, Jul 2 issue) that I began to understand why Ms. Yates was getting more support from women's groups than Susan Smith received. Andrea Yates was a former nurse turned stay-at-home mother and according to Quindlen, 'there is the entirely imaginable idea of going quietly bonkers in the house with five kids under the age of 7.'

Nowhere in her column does she stretch her imagination to express sympathy for the five innocent children, victims of their bonkered-out mother. Further on Quindlen quotes sociologist Jessie Bernard commenting on the institutionalization of motherhood. Clearly it is society that has forced Ms. Yates to stay at home to provide round the clock care to her brood at the expense of her sanity.

'Women not working outside their homes feel compelled to make their job inside it seem both weighty and joyful.' Funny, isn't it? How columnists who are so adamant about protecting a woman's right to choose are so bewildered when a woman chooses to stay home to raise their children. Lord, she must be psychotic!

Quindlen completes her thoughts by imagining herself with five children under the age of 7, and describes the horrible day-to-day aggravating things that children say and do to drive us mad. While she stops short of making excuses for Andrea Yates, she wants us all to acknowledge that deep down feeling that all mothers feel on a bad day that could possible lead to horrible things. Sorry, Anna, no can do."

I found the fact that women's groups were starting a defense fund for the 'bonkered-out' murderous mother indefensible and agreed with men who felt she should rot in hell. Turns out Mrs. Yates had emotional problems that predated the birth of any of her children and the more I learned of her marriage to Mr. Yates, she looked more and more like a Medea who killed her children to hurt her husband.

In my column, I concluded, "Having been a stay-at-home mother who had at one point five children under the age of six, I think I can appreciate better than most what Yates had to deal with. I can also agree that, at times, motherhood can be overwhelming, even maddening, especially with little or no help. I, too, spent many sleepless nights with colicky babies and since I nursed all of my eventual six children, it was years before I was able to sleep through the night. Like Yates, I had to deal with caring for a victim of Alzheimer's' because I cared for my mother-in-law until she passed away last year. Fortunately, by then my children were in their teens and I had help. I am no superwoman. While I was frequently overwhelmed by the work overload and my children's demands, I had the sense to know that what I really needed was a vacation."


Real women do not kill their children because they are over burdened. They may rant and rave and even run away for a while. Wusses do kill and they kill them before they're even born. Who can forget that NY Times writer, Amy Richards, who wrote about aborting two of her healthy triplets in utero (When One is Enough-7/18/2004) because she didn't want to have to move to Staten Island and shop at Costco?

The phrase-war on women-is a political staple used to demonize Republican positions on abortion and contraception. Both options are legal and available but the GOP objection is to why they should be a burden on the taxpayers who may have religious objections to them. Not all women need abortions or contraception but the strength of the economy affects all women and that is something the Democrats would rather not deal with. Under this administration, taxes have risen dramatically; food and gas prices are soaring and over 92 percent of the jobs lost under this president were lost by women. EPA mandates and other government regulations that are causing rising heating costs in the home affect all women more than the contraception Sandra Fluke is whining about.

Wussy women may care about having someone else pay for their birth control pills and condoms. Real women take care of this personal issue for themselves. Wusses believe the politicians and feminists who crow about the importance of Planned Parenthood. Real women know the truth behind its founder Margaret Sanger who was a eugenicist quoted as saying, "The most merciful thing that the large family does to one of its infant members is to kill it."

So my advice to the GOP is to continue the war on wusses and keep on fighting for real women by getting the economy back on track.