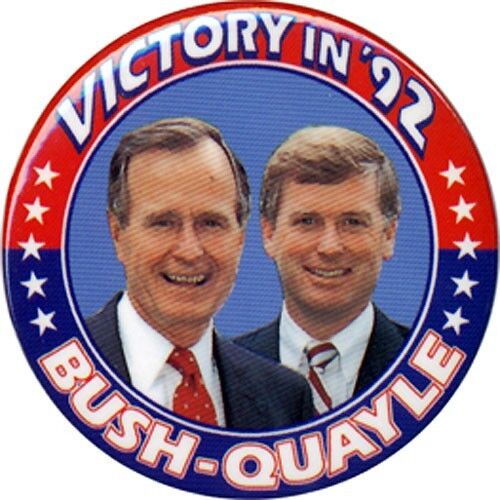 Whenever a column is written about one-term presidencies, I take it personally.

That campaign was back in the news the other day — specifically, a Bloomberg story positing that Trump 45 could be the next Bush 41 (i.e., a president shown the door after four years).

The story's gist: "If consumer spending starts to slip, there won't be much left propping up economic growth. This combination of weak growth, a rising tax burden and broken promises echoes the 1992 election. In addition, Trump is already accumulating primary challengers who will no doubt criticize him for his failure to deliver. When the Democrats pile on, it will be that much harder for the president to make his case for re-election."

I can't begin to fathom where the American economy will be a year to 18 months now (nor can most economists, for that matter), but there are some critical differences between the political climates of 1992 and 2019.

Presidential Fire In The Belly. George H.W. Bush was hands-down a great American — a war hero and risk-taker (trading in a secure place in Wall Street for the West Texas oil fields), a dedicated family man and public servant, not to mention a letter-writing man of extraordinary grace.

But in the walk-up to the 1992 election, Bush 41 was a reluctant campaigner. Maybe it was because he preferred governing to campaigning (his son, by the way, was an underrated campaigner), or that the elder Bush was more caught up in world affairs than what was on the minds of patrons of New Hampshire diners.

Whatever the reason, the elder Bush didn't throw himself into the re-elect until relatively late in the game (the infamous "message, I care" moment occurred in mid-January 1992).

President Trump, on the other hand, has been running for a second term pretty much since he entered office.

As of Labor Day weekend, Trump had visited 43 states and territories.

that includes three visits to Pennsylvania in 2017, two to Wisconsin in 2018 and four apiece to Ohio and Texas in 2018.

In 1991, the year before his re-elect, Bush 41 took 14 trips abroad. So far, in 2019, Trump has made only half that number (with three more planned for November and December).

Call it a byproduct of presidential geography (Bush 41 carried 40 states and 426 electoral votes in 1988 vs. 30 states and 306 electoral votes for Trump in 2016), but 45's travel reflects a presidency more concerned about swing states a year before it faces the electorate than was the case back in 1991.

Terrain Change? One can argue that, in 1992, George H.W. Bush was on the wrong side of history — the Cold War had come to a peaceful conclusion; in the last three presidential elections, the Republican ticket had accumulated 80% of what was up for grabs — 133 of 150 states and 1,440 of 1,614 electoral votes. Eventually, that run had to come to an end.

But the end of the Cold War also marked a shift in presidential campaigning —  domestic politics coming back into vogue. And that was a bad place for Bush 41 — he of engineering the liberation of Kuwait — to be.

Has the presidential terrain shifted much in the last four years? Trump will run the same as he did in 2016 — a blend of cultural issues (immigration, political correctness, anti-socialism) plus a question of America's standing in global affairs.

No Pat Buchanan. For the record, Pat Buchanan never threatened Bush 41's chances of securing the Republican nomination. The conservative firebrand did capture 37.5% of 1992's New Hampshire primary vote, to only 53% for Bush, by attacking the president on trade and immigration. Otherwise, Buchanan went 0-51 in that year's GOP primaries, winning 23% of the overall GOP primary vote.

But for the Bush campaign, Buchanan was a headache. 41 needed Buchanan's supporters come November, so concessions were made (most tragically, giving Buchanan an opportunity to deliver a "cultural war" address at the 1992 Republican National Convention).

The odds of Bill Weld of Joe Walsh, Trump's two Republican challengers, getting a prime-time slot at next summer's convention in Charlotte?

Weld is a vestige of a bygone era (the 1990s, when moderate GOP governors were fashionable); Walsh, with his history of bombastic statements, is not exactly the ideal spokesman for #nevertrump Republicans who want a "kinder, gentler" president.

That changes, of course, if the two challengers manage to keep under, say, 60% in New Hampshire. But until such time, Trump seems to have avoided what plagued both Bush 41 and Jimmy Carter in 1980 — a significant primary challenger that compromised the president's standing with his party's activist base.

No Ross Perot. After George H.W. Bush ran the Buchanan gauntlet in early 1992, he then had to deal in the summer and fall with the wildcard that was H. Ross Perot's quizzical third-party run (apparently, a grudge that 41 held for the rest of his life).

Perot's effect on the 1992 race cannot be understated. He captured 19% of the national vote, shook up the map (Bill Clinton winning in such unlikely places as Georgia and Montana). His presence on the presidential debate stage was a distraction, as was his jumping in and out and then back into the race (Perot quit in July 1992, then reentered the race a month before Election Day.

To the extent there's a significant third-party challenge in 2020, it would see more problematic for the eventual Democratic nominee. Just ask Hillary Clinton's 2016 crew how they feel about Jill Stein's effect on presidential landscape.

Meanwhile, absent that third-party spoiler, history favors Trump. Not since 1932 has an incumbent president to lost in a two-candidate, head-to-head matchup.

No Bill Clinton. The final difference: at the moment, 45 isn't looking at a Democratic opponent who resembles 42 — namely, Bill Clinton and his ability to win back blue-collar Reagan Democrats.

Yes, Clinton's parsing of words could be exasperating (for example, his too-cute marijuana position). And such actions as signing the federal Defense of Marriage Act in the dead of the night (with no cameras present) raised questions as to his core convictions.

Otherwise, Clinton was in the business of winning 270 electoral votes, which meant tailoring his stances to what Middle America wanted to hear (welfare reform, tax cuts, tough on crime).

One Democrat is positioning himself along the same lines — winning back blue-collar votes. But ask yourself: what policies does Joe Biden have to offer? And how does he respond when the Trump campaign runs footage of Biden raising his hand, on the debate stage (half-heartedly it seemed), indicating that he's in favor on offering free healthcare to non-citizens.

Not for now, at least.