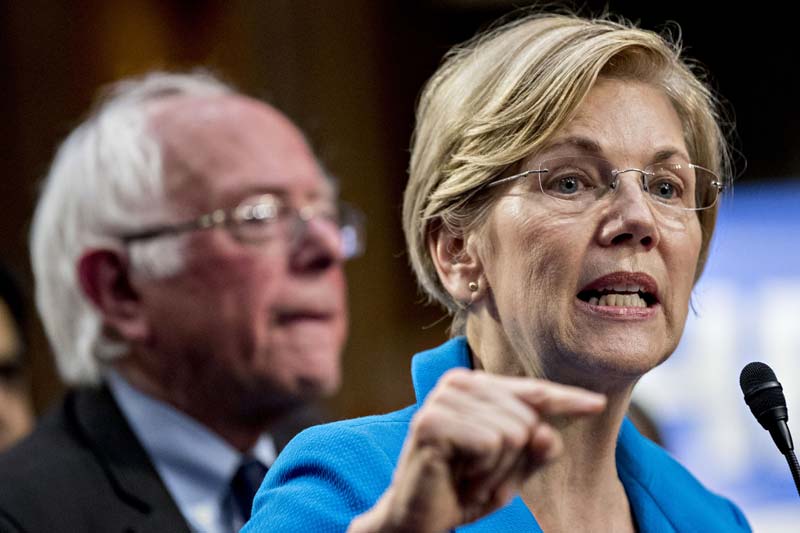 "I trust her when she says she can fight, and also win," Stanfield said Saturday at a Democratic steak fry where many of the candidates spoke. While Sanders and Warren have similar platforms, the Massachusetts Democrat would be more effective in accomplishing her goals, said the 51-year-old, who works at the YMCA.

Stanfield represents a growing problem for the independent senator from Vermont in his second run for president: Warren has begun to eclipse Sanders's once-dominant standing among the Democratic Party's most liberal voters and surpass him in some polls in the first two states in the nominating process: Iowa and New Hampshire.

They both support what would be a massive economic restructuring with ideas such as Medicare-for-all, but Sanders, 78, has carved out his brand as a democratic socialist while Warren, 70, has described herself as a capitalist who has operated more as part of the Democratic mainstream. While Sanders drew notice in 2016 for his avid fans and big crowds, it is Warren this time who is gaining traction that way.

These challenges have been compounded by volatility inside Sanders's operations in Iowa and New Hampshire. The campaign quietly fired its Iowa political director in the late summer and has yet to name a replacement - a key vacancy as the race enters a crucial phase, with less than five months to go before the February caucuses.

Sanders's difficulties in Iowa have come into sharper focus over the weekend. The most respected pollster in the state released a survey late Saturday showing Warren surging to 22 percent, two points ahead of former vice president Joe Biden, with Sanders at 11 percent. That places him third in the state where he fought Hillary Clinton to a near draw in 2016, launching an electrifying national movement.

Perhaps more worrisome for Sanders, the poll provided the clearest indication yet that Warren is eating into his base. She is winning a bigger share of people who caucused for Sanders in 2016 than he is, and she is outpacing him among those under 35, his former strong suit, according to the survey conducted by Selzer and Co. for the Des Moines Register, CNN and Mediacom.

"I give him tremendous credit for changing the conversation," said Rod Sullivan, a Johnson County supervisor who introduced Sanders at a campaign stop in 2015 and now backs Warren. "We need to get that kind of stuff done, and I think there's a better way to get it done now. Last time was a binary choice, and this time I think there are better messengers."

Sanders campaign officials, dismissing the notion that their candidate is struggling, vowed Sunday to plow ahead with aggressive moves to win the Iowa caucuses.

"Unlike Bernie Sanders, polls are inconsistent and all over the place, including an Iowa poll that came a few days ago," Sanders campaign manager Faiz Shakir said in a statement. "We feel good about our field operation in the state, and our team is working harder and harder each day to urge people to caucus for a once-in-a-lifetime candidate."

Sanders will embark Monday on a "Bernie Beats Trump" tour across the state, an effort to argue that he is the most electable choice against President Donald Trump in 2020. But his more immediate obstacle is Warren, whom he has refrained from criticizing, though some of his surrogates have been more aggressive.

Sanders has sought to stand out from the pack by emphasizing his decades-long advocacy of sweeping ideas like Medicare-for-all, something he did at a Sunday rally in Warren's childhood hometown of Norman, Oklahoma.

"It is unique and maybe unique in American history," Sanders said of his campaign, as he encouraged supporters to join a nationwide grass-roots movement. After they started chanting his name, he replied, "It ain't Bernie, it's you."

For loyal followers like C.J. Petersen of Breda, Iowa, Sanders's consistency merits support at the caucuses. "Senator Warren is fantastic," the 29-year-old said. "But Bernie has been on these issues in the very beginning."

But for many others, that's no longer enough. Matt Shockley, a 24-year-old teacher from Oklahoma City who attended the Sanders rally in Norman, said he voted for Sanders in 2016, but now is leaning toward Warren.

"She's very warm as a person, and she has her own kind of charisma," he said. "I think that will really help in the general. And on policy, she and Bernie are so similar, it doesn't feel like there's much of a trade-off in voting for her over him."

As the Sanders campaign tries to hang on to voters like Shockley, employee disputes and staff shake-ups have jolted the Vermont senator's organization, stretching from important early states to the Washington headquarters, leading to firings, resignations, tense meetings and fierce rivalries, according to people with knowledge of the situation.

In New Hampshire, where Sanders defeated Clinton by 22 points but is now in close competition with Warren and Biden, Sanders recently changed state directors. The operation had been tumultuous for months, people with knowledge with the situation said.

Some of the internal friction has touched the highest levels of the campaign. A dispute over salaries earlier this year pitted rank-and-file field staff against campaign management. On a conference call the day after a Washington Post report about the standoff, Shakir bluntly warned any leakers to quickly leave the campaign, speaking in a tone that angered some participants, people with knowledge of the call said.

The Post interviewed 30 present and past Sanders aides, allies and voters for this story. Many who described the tension in the campaign spoke on the condition of anonymity due to the sensitivity of the situation.

Warren has been building a robust operation in Iowa that many local Democratic strategists said is the most impressive in the field. She has been picking off former Sanders backers, including some of his earliest champions.

The Sanders campaign brushed aside questions about firing its Iowa political director Jess Mazour in the late summer. "We'll continue to make moves that we feel best position this campaign to win," Shakir said in a written statement after The Post reached out to the campaign last week. Mazour did not respond to requests for comment.


Although friction and turnover is not uncommon in the high-pressure environment of presidential campaigns, the extent of the discord in the Sanders operation has surprised some Democrats inside and outside the campaign. They say it reflects a departure from Sanders's 2016 effort. "As presidential campaigns go, the 2016 Sanders campaign had less conflict than most," said Mark Longabaugh, a lead strategist on that run who abruptly parted ways with the campaign on the eve of Sanders's entrance into the 2020 race. Sanders campaign officials played down the personnel changes and said his unique platform of demanding revolutionary change will ultimately propel him to victory. "Senator Sanders is very confident. He is feeling good about the campaign. We believe this race is down to the three people and we have the best ground game," said Rep. Ro Khanna, D-Calif., one of Sanders's national co-chairs. Khanna was speaking about Warren and Biden, who along with Sanders, have appeared at the top of most recent state and national surveys. Inside the Sanders campaign in New Hampshire, there were issues at the top levels of the campaign from its earliest days. State director Joe Caiazzo and senior strategist Kurt Ehrenberg, two veterans of the 2016 campaign, were in constant conflict, according to people with knowledge of the situation. The workplace situation became so strained earlier this year that a human resources official had to intervene, according to people with knowledge of the situation. Caiazzo and Ehrenberg declined to comment for this story. Caiazzo was recently reassigned to run the Sanders campaign in Massachusetts, and Ehrenberg is no longer with the campaign. Shakir said the personnel decisions were of no concern. "We've built a great team in New Hampshire and are in a really strong position there," Shakir said in a statement explaining the moves. Yet for some Sanders supporters, the New Hampshire Democratic convention earlier this month served as a sobering moment. In a state where Sanders won just over 60 percent of the vote in the 2016 primary, he was no longer the top draw. Sanders took the stage in Manchester to a rousing ovation, to as many full chairs as anyone then had earned, and to a room of waving signs bearing his name. It was louder than the reception greeting for anyone else - until Warren took the stage to a two-minute ovation not long after.