Across a politically divided nation, skepticism about impeachment 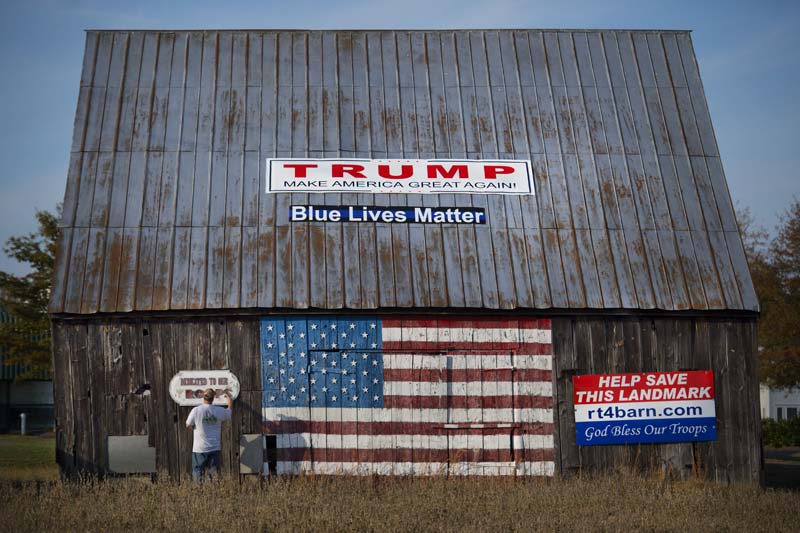 They don't ordinarily agree with each other. They watch different channels, hear different versions of the news and view neighbors across a gaping, painful political divide. But in swing districts across the country, the idea of impeaching the president has brought some Americans together: They're wary of deploying the Constitution's ultimate weapon - one that takes the decision about who is president out of voters' hands.

Derek Tsao is a Republican in California who has grown tired of President Donald Trump's behavior. Curtis Johnson is a Democrat in Florida who could never quite fathom why his fellow Americans chose a man like Trump. Lisa Foulds is a lifelong Republican in suburban Virginia whose kids have pushed her toward the center, so much so that she voted for a Democrat for Congress last year.

They all say the president may have crossed a line when he pressed his Ukrainian counterpart to investigate one of Trump's main political rivals. And despite their political differences, they say the Democrats' move this week to start impeachment proceedings against Trump is the wrong tactic at the wrong time.

Polls have shown that public opinion has shifted slightly in favor of impeachment, but many still see it as "an exercise in futility," as Johnson put it.

The retired steelworker from Indiana, now living in New Smyrna Beach, Florida, said he's eager for Democrats to find a candidate who can beat Trump next year, but he fears that impeaching the president will make Trump's reelection more likely. "There's not enough time before the election and nothing will come of it," said Johnson, 71. "This is going to hurt the Democrats because everyone's going to say, 'You're putting all your energy into this?' "

Tsao, 27, who is studying to be a physical therapist, has followed this week's news only glancingly, but he's all for investigating any credible accusations.

"If a crime has been alleged, you should find out more about it," he said. "I fear, though, that it's just another anti-Trump move."

Launching an investigation and potentially putting Trump on trial in the Senate strikes Foulds, a 50-year-old who still considers herself a Republican after voting for independent Gary Johnson in 2016, as "a waste of the taxpayers' money."

"For something as trivial as gaining dirt on somebody? It just seems petty," she said. "I just think it has to be much more egregious."

As events in Washington unfolded at a breakneck pace this week, many Democrats and Republicans interviewed in swing districts across seven states were united in their exhaustion - with politics, with polarization and, even among some of his supporters, with the president. Many said they chose not to follow every twist and turn in the Ukraine story because their views about Trump had long ago solidified, pro or con.

Voters across the partisan spectrum argued that next year's election - not impeachment - is the best way to resolve the country's struggle with a divisive, unpopular president who now stands accused of betraying the nation's interests.

An NPR-"PBS NewsHour"-Marist poll conducted Wednesday found that 49 percent of Americans supported opening an impeachment inquiry while 46 percent were opposed. And in a Huffington Post-YouGov poll completed Thursday, 47 percent said that "Trump should be impeached and removed from office," up slightly from 43 percent earlier this month. The increase was driven more by increased support among Democrats than among independents.

Polls taken earlier in the week, before details of the Ukraine call were known, showed somewhat less support for impeachment. In a Quinnipiac University survey completed on Monday, 37 percent of registered voters supported impeaching and removing the president; 57 percent were opposed, including nearly all Republicans, 58 percent of independents, and 21 percent of Democrats.

Rosa Kee can't stand Trump, but for a long time, she thought impeachment was the wrong idea: "I really wanted us to vote him out, because otherwise he'd say, 'This isn't what the people wanted.' "

But this week, Kee, a former telecom employee from Stone Mountain, Georgia, changed her mind. Kee is now, grudgingly, okay with the Democrats pressing toward impeachment.

"This feels different to me," said Kee, 73. "Back when he said to Putin, 'Russia, if you're listening, go after Hillary,' I thought, 'OK, that's just his ego talking.' But what he did to this Ukrainian guy, now he's using his position for his own interests."

Kee still doesn't like the idea of Congress removing Trump - a decision she thinks voters should make on their own - but she believes House Democrats are making a principled decision, even if she's certain it won't succeed.

"It will help the Democrats because they finally did something about him," she said. "But I fear it will help Trump, too, because he's always making himself out to be the victim, and that always works for him."

Impeachment - Congress' power to remove a president without a vote by the people - has never been popular. In the 1970s with Republican Richard Nixon and in the 1990s with Democrat Bill Clinton, a majority of Americans concluded that the president had behaved badly. But the country remained largely opposed to impeachment until shortly before Nixon resigned, and in Clinton's case, all the way through his acquittal by the Senate.


In Washington, the Ukraine story sucked the air out of every other issue. In Iowa and other early primary states, Democratic presidential candidates watched as news coverage pivoted from the campaign to impeachment. Political consultants and pundits shifted into hyper-speculation mode, urgently searching for clues about how the impeachment probe might alter the country's political path.

In swing districts, the Ukraine call and impeachment inquiry didn't seem quite the watershed events they were in the capital, but some voters welcomed the move.

In the Yorba Linda, California, townhouse development where Frank Bryant lives, some neighbors no longer speak to each other because of their opposing views on Trump. "It's way too personal," so nobody talks politics anymore around the community pool, said Bryant, a professor of marketing at nearby Cal Poly Pomona.

He generally votes for Democrats, but he admires how Trump has managed the economy. Now, Bryant's ready to go along with House Speaker Nancy Pelosi's decision to switch gears and embrace impeachment.

"I think we have to go with the speaker right now," Bryant said. "She's been very careful, and so, if she sees something there now, I believe her."

Voters on both sides echoed Pelosi's concerns earlier this year that an impeachment drive could hurt Democrats. Trump supporters and opponents alike predicted that the move might strengthen Trump's reelection bid.

The modern history of impeachment demonstrates that a sitting president can indeed turn the tables on his accusers, said Frank Bowman III, a professor at the University of Missouri School of Law and author of "High Crimes and Misdemeanors," a history of impeachment. Bowman said that Clinton effectively pressed his case in the news media, portraying his Republican opponents as bad guys who wanted to use his extramarital sexual affair to remove him from office.

"Clinton managed to flip the public narrative from his own bad behavior to the behavior of those who attacked him," the historian said. "Trump doesn't need Clinton to teach him anything about fighting dirty. Any attempt to impeach Trump is going to invite the nastiest kinds of backlash, first of all against Joe Biden."

In St. Clair Shores, a sharply split district in Detroit's northern suburbs, Diana Rascano, 69, said she often votes for Democrats in local elections, where government "touches your life more than the feds." But in presidential votes, she's a consistent Republican because of her conservative views on abortion, immigration and taxes.

The transcript of the president's call with his Ukrainian counterpart sounded like standard business talk to her, not unlike what she recalls from her days as an executive at the Detroit Edison utility company.

Rascano said Democrats, some Republicans and the news media are acting as "one big angry mob in . . . a constant barrage of trying to find a crime" committed by Trump. As a result, she said, she's more supportive of the president in 2020 than she was in 2016.

But last year, county voters shifted their loyalties back to Democrats as Gov. Tom Wolf and Sen. Robert Casey Jr. both carried the county by about 20 points.

In Harborcreek, a working-class town just east of Erie city, many residents said they weren't paying much attention to the unfolding impeachment controversy in Washington.

Jim Cass, a 77-year-old retired bar owner who has been a Republican all his life, has never liked Trump and said the Ukraine matter has only validated his view.

"I think he is a liar and a cheat and I never trusted him with our foreign affairs," Cass said, "and I don't like anything about him. Period."

He's all for impeaching the president, but he isn't sure Congress will be able to amass sufficient evidence to get the job done, and he worries that the debate will deepen the nation's divisions.

He's certain the debate will exacerbate divisions within his own family. He has a son and a son-in-law "who loves Trump," but another son and a daughter-in-law who "don't have any use for him, either."

But Cass said the risk of more family fights is worth it if the result is removing from office the man he considers "mentally ill."

To another Republican in Harborcreek, though, the move toward impeachment seems a recipe for a Trump victory in 2020. Randy Wienke, a 64-year-old truck driver, has been stuck in the house for several days recovering from back surgery - plenty of time to absorb details of the Ukraine story on Fox News.

He's concluded that Democrats are just out to remove Trump over a phone call that he said most voters don't care about. "They just don't like him, and they don't like him because he doesn't play into their little clique politics game there," Wienke said.

He's convinced that the "real criminals" are Joe Biden and his son Hunter, who have been the target of Trump's counterattack this week.

Even if Trump did do something wrong, Wienke said, he doesn't understand why Democrats would rush to push him from office: "Who would take his place? Mike Pence? They still would not be getting rid of any of his conservative, Republican political views."