'Everything conservatives hoped for and liberals feared': Neil Gorsuch makes his mark at the Supreme Court 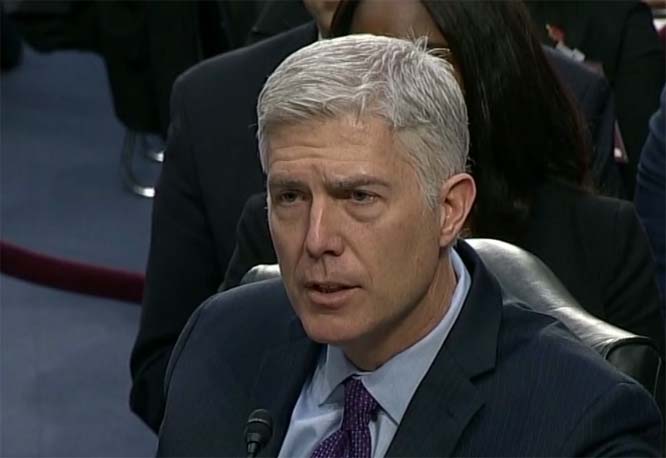 WASHINGTON - Some justices ascend to the Supreme Court quietly, deferring to their elders and biding time before venturing out too far to offer their own views of the law.

Justice Neil Gorsuch, on the other hand, appears to have been shot from a cannon.

At his inaugural oral argument in April 2017, President Donald Trump's first choice for the Supreme Court asked 22 questions. In the term just completed, Gorsuch wrote more dissents than any other justice and typed out a whopping 337 pages of opinions. Again, more than anyone else.

Along the way, he has established himself as one of the court's most conservative justices and a reliable vote for Trump initiatives that have reached the Supreme Court - the travel ban on those from mostly-Muslim countries, adding a citizenship question to the census form and allowing a ban on transgender service in the military to go into effect. He has shown a willingness to overturn precedent and an impatience with more reticent colleagues.

More than anything, he has displayed a supreme confidence that his originalist approach to the law is the most disciplined and principled way to go about his job as a justice.

"I'm all in, and I wanted to explain that," Gorsuch said in a recent interview in his chambers. He was referring to "A Republic, If You Can Keep It," a book he has written that goes on sale Tuesday. The title is from Benjamin Franklin's reported comment when asked what kind of government the Founding Fathers would propose.

It is a collection of essays, speeches, past opinions and ruminations on civics, civility and the art of judging.

(In the interview, which happened to fall on his 52nd birthday, Gorsuch was unwilling to discuss the way the Senate goes about evaluating Supreme Court nominees. "You're not going to make me relive the confirmation process are you?" he said in response to a question. "On my birthday?")


Those who follow the court, on the left and the right, do not need a book to evaluate how Gorsuch has filled his role as the replacement for Justice Antonin Scalia, who died in 2016.

"He's everything conservatives hoped for and liberals feared," said Erwin Chemerinsky, the liberal dean of the law school at the University of California, Berkeley. He recently wrote a detailed evaluation of Gorsuch's jurisprudence for ABA Journal.

Gregory Garre, who was solicitor general under President George W. Bush, said that Gorsuch is much like a concentrated version of Scalia, right down to his "maverick" tendencies to join the court's liberals on some criminal justice issues.

"In a 2016 tribute to Justice Scalia, then-Judge Gorsuch described Justice Scalia as 'docile in private life but a ferocious fighter when at work,' " Garre said. "Much the same could be said about Justice Gorsuch."

One difference, according to Garre: "Arguably, he's been more open to rethinking long-standing constitutional doctrine. . . . In this regard, he's closer to Justice [Clarence] Thomas, who, even when Justice Scalia was on the court, often found himself writing alone on such matters."

Respecting the court's precedents - "stare decisis," it is called - is a pledge that senators of both parties try to extract from Supreme Court nominees. Republicans want to preserve rulings respecting the Second Amendment; Democrats worry about eroding the right to abortion or the protection of same-sex marriage.

According to Adam Feldman, who analyzes the court for his website Empirical SCOTUS, Gorsuch has voted to overturn or suggested revisiting 11 of the court's precedents in his two terms on the court.

Gorsuch, in the interview, denied that made him much different from any other justice.

"I think we'd all agree that precedent is very important," Gorsuch said. "But it isn't inexorable."

As he writes in the book, Gorsuch said a justice must look at how a decision comports with the "original meaning" of the Constitution, how well reasoned the decision was at the time, how long it has been relied upon, how many other justices have questioned it.

"Goodness gracious, this court is as modest and as conservative as any in our history" about overturning precedent, Gorsuch said.

Gorsuch voted with fellow conservatives to overturn a 40-year-old precedent involving the way public employee unions can collect collective-bargaining fees. And he advocated, along with Justice Ruth Bader Ginsburg, uprooting a precedent that allows local and federal prosecution for the same offense.

In a case last term that allowed a 40-foot cross to stand on public land as a memorial to World War I veterans, Gorsuch and Thomas went further than the majority to advocate finally ditching the test the court has set for deciding when a public display constitutes government endorsement of religion. Along with it, he said, should go the ability of "offended observers" to challenge such displays in court.

There are few references to current controversies in the book, and in the interview Gorsuch was adamant about not commenting on cases that could come before the court or opining about the man who nominated him.

For instance, in the book and in the interview, Gorsuch lavishly praised federal judges who "believe the Constitution is the greatest charter of human liberty that history's ever known. And they believe in this country, they believe it's more important than their own financial feathering of their nests."

But asked about Trump's frequent charge of bias against judges who have ruled against him or his policies, Gorsuch balked. "They can do their thing in the political arena. I'm a judge. And I'm going to stick to my lane," the justice said. "You asked about what I think of judges in this country. I already talked about that, all right? Insert that answer here."

Far from the candid coming-of-age memoirs of Thomas and Justice Sonia Sotomayor, Gorsuch's book has chapters such as "Our Constitution and Its Separated Powers" and "The Judge's Tools." It is in the latter that he defends his view of originalism - "the Constitution should be read in our time the same way it was read when adopted" - and the textualist view of statutory interpretation.

Such a practice eschews trying to divine the legislature's intent in passing a law and "tasks judges with discerning (only) what an ordinary English speaker familiar with the law's usages would have understood the statutory text to mean at the time of its enactment."

Such pronouncements fit in a book trying to explain how a judge works. But when Gorsuch first joined the court, they seemed to grate on his more experienced colleagues when he extolled them at oral argument. More than one issued a rebuke.

But the court has a way of coming together. "This is a group of people who respect, admire, cherish one another, I think, on a daily basis," Gorsuch said in the interview. "It's a very special little place."

Sotomayor, Gorsuch's liberal seatmate when the court hears oral arguments, has described him as a "lovely" person with whom she has decided to agreeably disagree. Ginsburg, one of those who seemed put off early on by the new justice, now tells audiences that she assigned two majority opinions to Gorsuch in the past term when he sided with the court's liberals.

Ginsburg, famous for her octogenarian workouts, also says Gorsuch is probably the court's fittest justice: He often makes an hour-and-a-quarter commute to work - each way - on his bicycle.

Despite their lifetime appointments, justices share a sense of fleeting fame. That is probably how it should be, Gorsuch said. But his worry is that Americans do not understand the structure of government and its institutions.

"Only about a third of Americans can identify the three branches," Gorsuch said. "Another third can only name one branch of government. Ten percent thinks Judy Sheindlin serves on the United States Supreme Court. Judge Judy!"

He added, "I've got great respect for her, but she is not one of my colleagues."