Assume nothing: Will President Trump keep Mike Pence on the ticket in 2020? 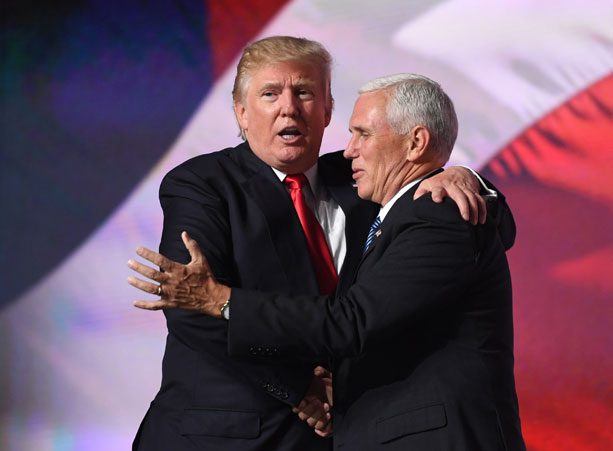 For the next several months, the nation's political focus will understandably be on the sprawling Democratic field, the horse race, the debating, the voting, the winnowing.

President Donald Trump will, of course, gratuitously tweet himself into those skirmishes to make news. Within his own party, Trump currently faces no serious challenger to threaten his reelection.

Credible challengers from within a president's party never succeed in anything other than dooming the incumbent's reelection. Think Ted Kennedy challenging Jimmy Carter in 1980 or Theodore Roosevelt challenging Howard Taft in 1912.

Any contemporary challenger from the GOP faces a mountainous hurdle, taking on a president with upwards of 90% Republican approval, even one with Trump's steady but lackluster job approval record.

Unnoticed, for now, is any discussion of Trump's vice presidential running mate in 2020. The natural assumption is he'll stick with Vice President Mike Pence. Assumptions in politics are always dangerous. Ask Hillary Clinton about her presumed 2016 victory.

And assumptions are especially dangerous when they involve a mercurial chief executive who values unpredictability and wants to win at any cost.


Pence is a 60-year-old former governor and House member. He's been a most dutiful and loyal political partner, who connects Trump to Congress and the genuine conservatives on the right.

Remember those Pence gaffes when he appeared to question Trump policies or behavior? How Pence seemed to suggest at one private fundraiser that Trump was no real conservative?

No, you don't. Unlike his vice presidential predecessor, who continues his verbal missteps on the current campaign trail, Pence doesn't do anything to call attention to himself.

In a word, Pence is nondescript. Which is how this president likes his subordinates. And, surprising to some, Trump has reciprocated, including his vice president in most every conceivable event and meeting, more so than his predecessors did, publicly hailing Pence's great work to applause. "Stand up, Mike."

At one of his rare full-scale news conferences, Trump was asked if he could name his 2020 running mate right then.

"Well," the president responded in a made-for-TV moment, looking out over the packed ballroom, "I haven't asked him. But I hope so. Where are you? Mike, will you be my running mate? Will you?"

That was Nov. 7, 2018. Trump has changed his mind on many things since then. And he will likely change his mind on many more in the next 51 weeks before the Republican National Convention in Charlotte.

Here's a scenario that could see Trump also change his 2020 running mate: Democrats gather next July. It is hard to imagine their presidential ticket emerging from Milwaukee without a woman on it.

Trump will have six weeks to compare that ticket's appeal to his. He is clearly comfortable lagging in job approval polls that have never exceeded 46% since he took office.

Not coincidentally, 46 is the percentage of the popular vote that Trump won in 2016. It happened to come in just the right places for an Electoral College victory. They included the 46 electoral votes of Pennsylvania, Michigan and Wisconsin, which Trump won by a combined 78,000 votes.

Democrats will not ignore those states again as Clinton did. Last fall's midterm results and recent polls show Republicans in general and Trump in particular lagging in suburban support, especially among women.

Last week, the Hill-HarrisX poll of registered Republicans found overwhelming support to keep Pence on the ticket â€“ 69%. No one else got more than 9% and that was â€” wait for it â€” Nimrata Randhawa.

A former state legislator, like Pence, she was a governor (South Carolina), and was Trump's first U.N. ambassador, a job where she talked tough to Russia and acquired foreign policy credibility. Unlike most of this president's ex-cabinet members, Haley left on good terms and her own.

As a loyal party member, Haley has promised to campaign aggressively for Trump next year. It's possible, if seemingly unlikely at the moment, that she could be campaigning then not just for the Trump ticket, but as part of it.