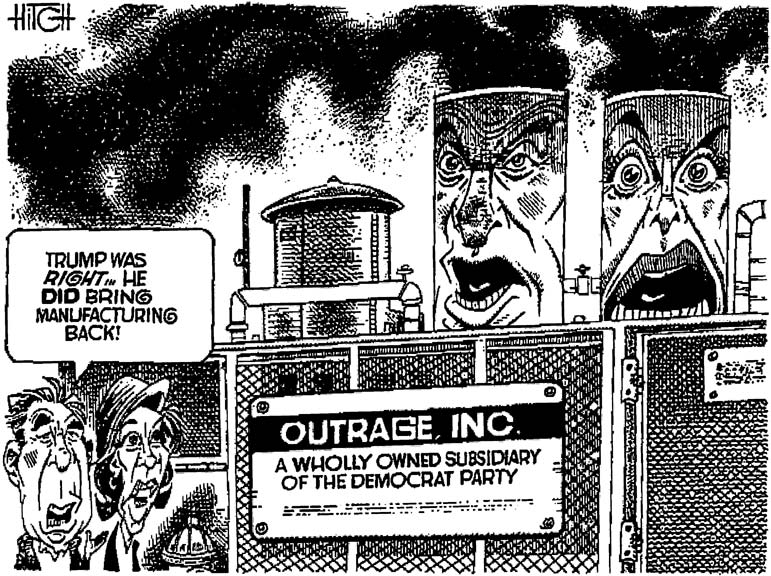 If you're desperate to find a corruption-free zone, where politicians never threaten to hammer people to get what they want, where would you look?

How would I know?

But I would suggest that only a chumbolone would waste time searching the notoriously corrupt Ukraine, or famously corrupt American states like Illinois and New Jersey.

And you wouldn't look in Washington, D.C., either, where corruption from Illinois and New Jersey is brought, sanded down and polished, then given a few Botox injections right in the lips to smooth out the wrinkles.

Then it's writ large and often carved in marble.

If you understand human nature, as did our American founders, then you know the Kiev Way is the Chicago Way is the Trenton Way is the Washington Way.

And the government hammer in the soft hands of a master politician is a frightening thing indeed.

But now Democrats and their media handmaidens are eagerly pushing the impeachment of President Donald Trump for allegedly pressuring the government of Ukraine to apply that hammer to Democratic presidential candidate Joe Biden and his son Hunter.

What doesn't interest them, however, is what prompted Trump to make his ill-advised phone call to the Ukrainian president, namely what happened with the Bidens in Ukraine?

The son mysteriously picked up $50,000 a month for working with a natural gas company, Burisma Holdings, though he had no experience in that field. And as vice president, Joe used a billion dollars in promised U.S. aid to leverage Ukraine into firing a prosecutor who said he was looking into Hunter's politically connected benefactors. Biden said he didn't talk to his son about his Ukrainian business, but the son in an interview said they did discuss his work. In March, the current Ukrainian prosecutor general, who had cleared Hunter Biden's employer of any wrongdoing two years ago, reopened the investigation.

"I think this may be the straw that broke the camel's back" said U.S. Sen. Dick Durbin, the Illinois Democrat.

I'm on record saying Trump crossed the line with that July 25 phone call.

But is what Trump is alleged to have done a matter for public censure and condemnation, or is it an excuse for Democrats to try and yank him out of office with only a year until the 2020 elections?

And is this what presidential impeachment is for, a chance to get rid of someone who has enraged you by defeating your own corrupt and flawed candidate?

I guess that all depends on what your definition of is, is.

What is painfully obvious is that the media and certainly the Democrats don't seem all that eager to press Biden, the leading Democratic presidential candidate, about his sloppy, obvious and public conflict of interest in Ukraine.

And now that Trump has focused on Hunter, Democratic presidential candidates Bernie Sanders and Elizabeth Warren aren't pushing those legitimate questions, lest they be accused of helping Trump.

The Ukrainians knew who Hunter Biden was. His daddy was vice president. What signal do you think that sent to the Ukrainians?

Ukrainian politicians are like Democratic pols from Chicago and Trenton. They didn't require a flashing neon sign over Hunter Biden's head, telling them to be friendly to the kid. And Joe Biden knows it.

But while pondering this, I read a smart column by Marc Thiessen referencing a curious CNN report back in May. Just then, a tingle ran along my leg.

The story goes that on May 4, 2018, three prominent Senate Democrats, Durbin, the ethically challenged Robert Menendez of New Jersey, and Patrick Leahy of Vermont wrote a letter to a prosecutor in Kyiv demanding that Ukraine play ball in the Robert Mueller investigation of the president.

I found the letter and read it myself.

It certainly was a smooth letter, and expertly rounded, a river stone in a sling, or a blackjack in a velvet pouch. But it was also quite pointy with implied threat.

The Democratic senators were upset about news reports that Ukrainian Prosecutor General Yuriy Lutsenko, wasn't doing enough to help the Mueller investigation nail Trump and that he had closed investigations they deemed important to Mueller.

"As strong advocates for a robust and close relationship with Ukraine, we believe that our cooperation should extend to such legal matters, regardless of politics," read their letter, reminding Ukraine that our two nations have a relationship built on respect, democratic principles and the rule of law.

It didn't expressly mention money, but it didn't have to. Anyone who's grown up in Illinois or New Jersey and studied politicians even from afar would know what was implied, and that elbows don't bend backward.

Unless of course, you apply maximum pressure and push that elbow hard. Their hearts and minds will follow, though sometimes the bones dislocate, like those of a roast chicken.

"We have supported that capacity-building process and are disappointed that some in Kyiv appear to have cast aside these principals in order to avoid the ire of President Trump. If these reports are true, we strongly encourage you to reverse course and halt any efforts to impede cooperation with this important investigation," the Durbin, Menendez and Leahy letter said.

My translation: You want to be our close and robust friend with benefits? Help Mueller nail Trump's scalp to the wall. Or we can go the other way and become enemies.

But Mueller couldn't nail Trump, could he?

And politics is politics is government, in Chicago or Trenton or Kyiv or Washington. There are grand sentiments carved into marble about what is the greater good.

But in the end, it's all about who holds the hammer.