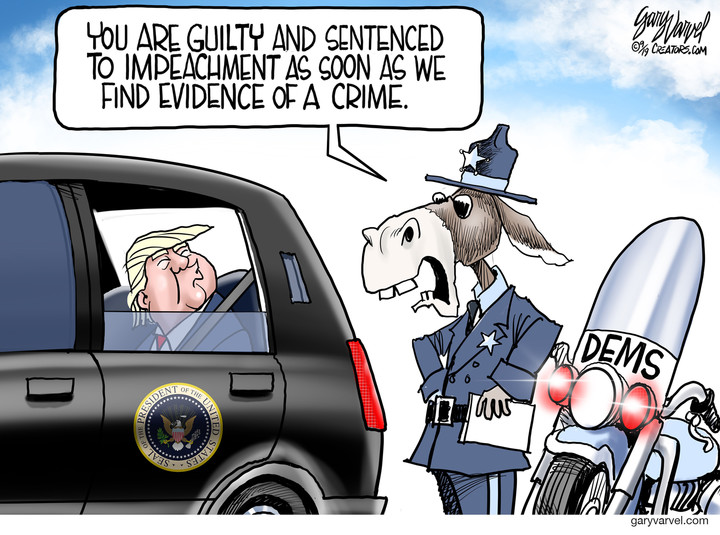 When came out late Tuesday afternoon to announce the House had begun a "formal impeachment inquiry" of President over that business, three thoughts came to mind.

The first is that it's about time the decided about fishing or cutting bait.

They've been teasing us and hinting and salivating over impeaching Trump since the moment he was elected. The constant whining and hysterics -- magnified by their allies in the -- have been exhausting.

Now, Pelosi and her have decided to try to catch that tuna, but they'll still be tossing chum in the water, since they don't have control of the , and the is the jury in a full presidential impeachment.

But they'll have more time to make speeches, some legitimate, others quite gaseous, dragging this out all the way to 2020.

The hook is the story that Trump abused presidential power by asking to investigate and his son Hunter over their dealings with . There is plenty of gas in the Trump/ story, but not enough facts yet, which hasn't stopped demands for Trump's impeachment.

But what we do know doesn't look good for Trump.

Trump withheld some $400 million in military aid that was approved by and, in his July phone call with Ukrainian President , asked him to go after the Bidens for their conflicts in the country.

As vice president, Biden dangled a billion dollars in aid to but demanded that leaders first fire a federal prosecutor investigating corruption. Biden's son Hunter, who knew nothing about gas, was making $50,000 a month with a Ukrainian natural gas company in a deal, Ukrainian style.

What Biden did was indeed sleazy, especially publicly bragging about how he got the prosecutor fired.

But, however you cut this, if demanded a Biden investigation from a foreign power in exchange for American aid, he went over the line that even narcissists should not cross.

That's an abuse of power. No president should be using foreign policy to benefit his or her political future. And now the , who control the House, will decide how far to take it.

The second thought after Pelosi's announcement was of my grandfather, Papou Pete. He didn't like politicians no matter the party. Papou saw politicians who made speeches about virtue in public, then stuck their hand out in private, wanting that hand filled and then kissed.

He had that classic saying about the politicians and the donkeys and gas.

And the third thought?

Biden isn't going to like this much. Some of the most tribal left insist what Biden did as vice president in isn't a story because The told them so. But it is most definitely a story. It rips the scab off Joe.

For all the breathlessness over Pelosi's actions, I hope you know that what politicians say -- even when wearing makeup on TV and surrounded by American flags -- isn't the whole story. What they don't say is important too.

And what Pelosi didn't say was that she'd have the full House vote on the matter.

She doesn't want her Democratic members having to stand and declare whether they want to proceed or not -- especially those who won in 2018 in pro- districts.

They're the reason she's speaker. So, she said her Democratic committee chairmen would investigate. But they've been investigating since took control of the House last year.

So, what's really changed, if anything? It looks like Pelosi was tired of trying to withstand the anger of leftist like , who's been tweaking Pelosi for not going after Trump earlier. Now Pelosi gets AOC off her back, at least for a time, and protects her who won election from Republican districts, for a time.

But eventually, they might all have to declare, which isn't easy. Standing on principle with their fingers moistened in the wind can be a complicated dance move.

What was interesting is that Pelosi as chief Democrat -- from a party that's long viewed the as some bendable, living document ready to be shaped to fit political need -- would reach back in time to and the Constitutional Convention.

The new Americans were waiting in and asked Franklin whether we'd have a monarchy or a republic.

"A republic," Pelosi reminded us of Franklin's response. "If you can keep it."

Based on what modern Americans have been doing now for years, long before Trump, I'll speculate that just about everyone is now in their comfortable tribal camp (or is that womb?) on the story.

Ask yourself: What would be doing right now if President were in office, and he'd withheld military aid to unless they investigated his political opponents, say, some milquetoast like or ?

would be screaming bloody murder, just like the are doing right now, filling up with air, making big speeches and pithy tweets.

Which brings me back to Papou Pete, who didn't like speechifying politicians. I've mentioned this in previous columns, but since the story is at bottom about politics and natural gas, I'm reminded of what Papou told me again and again:

When the politicians speak, the donkeys break wind.