Latest smear against Kavanaugh is part of Left's scorched-earth strategy 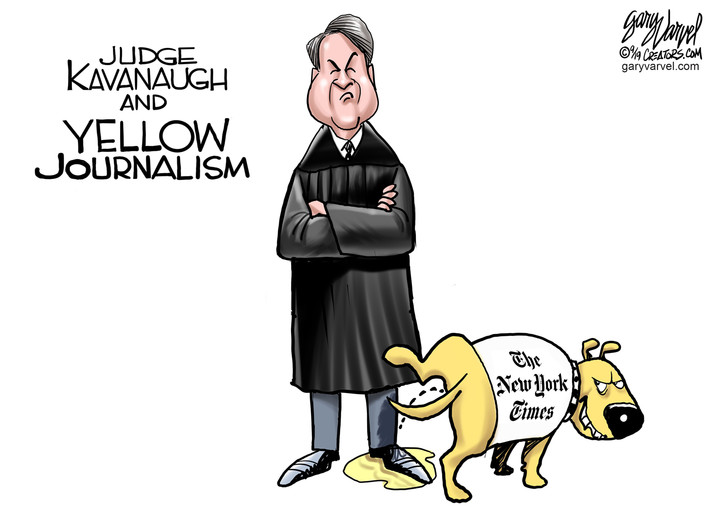 Just a few days before and Democratic presidential candidates engaged in an outrageous smear of Supreme Court Justice -- a smear the newspaper was forced to amend and walk back -- there was a gruesome discovery in a suburb south of .

Out in a garage in , authorities found the remains of 2,246 babies on property owned by the late abortionist Dr. . His family had been going through his possessions when they discovered the stuff of nightmares.

The Kavanaugh smear was deliciously exposed in a series of tweets by journalist , senior writer for The Federalist. The panic of the sucked up most of the prominent media/political oxygen over the weekend.

And if Klopfer's demonic cache of human bodies wasn't ignored, exactly, it was consigned to the far edge of things, where we keep our monstrosities at bay.

What, if anything, connects these seemingly unrelated events?

Abortion is what Klopfer engaged in, as did many others before him, including the infamous of , who snipped the spines of infants with scissors and kept his trophies and was sentenced to life in prison.

And abortion is what this smearing of Kavanaugh has always been about.

The left lost control of the Supreme Court through the 2016 election of President , who has nominated two conservative justices and may nominate another if he's re-elected in 2020. Since 2016, the left has waged cultural war, delegitimizing all institutions that may stand in their way.

Theirs is a dangerous game with far-reaching implications, but the left reveals itself, clearly, as determined to destroy Kavanaugh's credibility, and that of the Supreme Court itself, to protect past gains. Unhindered, in fact aided and cheered on by many in the media, the left proceeds on its scorched-earth strategy.

What is dangerous is that what is burned in their culture war are American institutions, and the scorched earth is the American republic.

Some may object to my reference to human remains as having been babies, rather than the impersonal "fetuses" or "masses of tissue." But such journalistic newspeak is politically loaded, and makes it much easier to allow powerful lives to exert their will upon the weakest among us.

It is easier to consider them as abstractions, as opposed to thousands of dead babies stored out there in for so many years.

There is nothing remotely abstract about the remains of 2,246 human beings, is there?

The strategy of the left is undeniable and clear. It is about the use of force, about relentless pressure and shame, using media as both handmaiden and the lash. It is about those who virtue-signal most often about due process, demanding it, yet denying those same due process considerations to those with whom they disagree.

The left's end game is the delegitimization of the Supreme Court, if justices don't give them the political outcomes they can't achieve through legislation.

One way to accomplish this is to sear into the American mind the idea that Kavanaugh is personally illegitimate, and therefore his reasoning and decisions are illegitimate. Though the allegations against him remain uncorroborated, and most are incredible and fall apart in embarrassing fashion, like the one most recently in the , the assault continues.

And not only against Kavanaugh, but also against other justices and future nominees. They are warned that destruction and humiliation await.

So, the left would hang upon his neck an asterisk like some medal of shame, a reminder to future history that everything he accomplishes is illegitimate.

This was expressed, clearly, in a video of a speech by , the lawyer for Kavanaugh's initial accuser, . Ford testified before the in Kavanaugh's confirmation hearing that, many years ago, when she and Kavanaugh were in high school, he assaulted her. Yet there were no corroborating witnesses, none remembered the party and even Ford's then close friend reportedly doesn't believe her story.

But Ford's testimony had the intended effect. It savaged Kavanaugh's reputation and spawned a wave of suspect and equally unsubstantiated anti-Kavanaugh smears that were treated as gospel by Democratic politicians and many in the media.

Despite this, Kavanaugh was confirmed in a close vote. The Katz video, obtained by The Daily Caller, shows Katz discussing the long-term strategic implications in a talk to a feminist group at the in April.

"In the aftermath of these hearings, I believe that Christine's testimony brought about more good than the harm misogynist caused by allowing Kavanaugh on the court," Katz said. "He will always have an asterisk next to his name. When he takes a scalpel to Roe v. Wade, we will know who he is, we know his character, and we know what motivates him, and that is important; it is important that we know, and that is part of what motivated Christine."

An asterisk next to his name? That's just perfect.

I suppose it is preferable to pinning two large scarlet letters, an "R" and a "C," on his robes to identify him as a Roman Catholic.

But an asterisk accomplishes just about the same thing, doesn't it?