Something to cry about: The rise of the surveillance state after 9/11 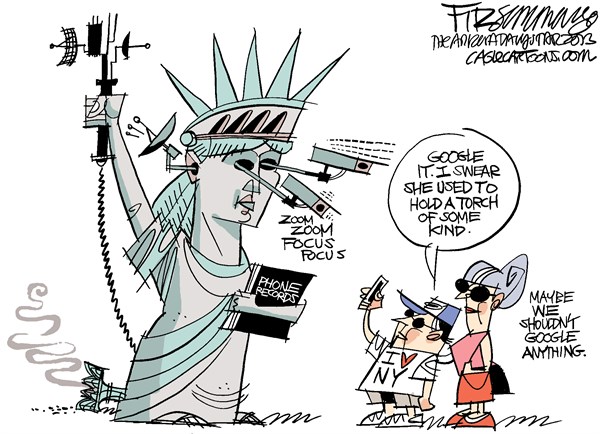 List stories are generally cobbled together for those who can't waste a lot of time bothering about context. But then, who's got time for context when we're always on our phone?

I generally avoid list stories, except for the deliciously idiotic ones like "The 9 Best TV Shows Guaranteed to Make You Cry."

I don't loathe cry shows such as "This is Us." They fill an emotional need.

Still, we certainly cry a lot, more than ever now, don't we?

With our box of tissues on the coffee table, ice cream at the ready if something bad or happy/sad should happen to people we know aren't real, we're eager for the tears.

We project. America swims in the tears and we text our friends about them. Our own real tears and those tears of fictional characters become tributaries in the same great river. Does this make us happy?

Politicians are marketers and herders, and they understand the new sentimentality just as do TV execs. And if there's one thing TV can do, it's to ladle on the emotion and sentimentality for profit. Even in political coverage.

Yet not all lists are mindless. There was an intriguing list recently, "The Marist College Mindset List for the Entering College Class of 2023," a compilation of stuff that has always or never been true for 18-year-olds in the class of 2023.

No. 1 is the terrorist attacks of , in which more than 3,000 Americans were killed when Islamic terrorists hijacked jetliners and slammed them into New and the Pentagon.

" for their grandparents, and the Kennedy assassination for their parents, 9/11 is a historical event."

You know what becomes of historical events. They're things that happened to old people. And those who burned or jumped and those who were the first responders, some now dying of cancer from the toxic dust of Ground Zero, fade from memory.

My sons are just a bit older than the incoming class of 2023. They were in kindergarten on that 9/11. The next day they began using Legos to build "" and crashed them together. But they were so young that 9/11 has now begun to fade for them, as well.

In that Marist list there were facts such as "the primary use of a cellphone has always been to take pictures," and something about "pink slime" being ever-present as a food additive.

No. 7 was interesting: "There have always been indecisive quadrennial debates regarding the future of the ."

This one is important because without the , young people who settle in the South or Midwest will eventually live real painful lives that follow the plot of that old movie trilogy, "The Hunger Games."

Those in forgotten red states may eventually rebel at the federal hammer wielded by the more populous dark blue coastal regions. Federal power is after all, federal power. Libertarians, conservatives and other dissenters may be viewed as dangerously subversive, if they aren't already.

Who knows? Perhaps an entire information industry will be devoted to marginalizing them and calling them Nazis and reducing them to subhuman status.

To learn what happens next, just rent the movies.

So, is college for the class of 2023 about learning to maintain liberty or just about how to get a job?

Does college teach self-censorship lest students anger their left-leaning professors and suffer grade punishment? Or has the class of 2023 already learned that important survival skill in high school?

This is not a quiz.

"They have grown up with a Patriot Act that has dramatically increased state surveillance to prevent terrorism."

I suppose there could also have been a 47 a.) about former National Intelligence Director 2013 testimony to , he was asked if the government was collecting any data on Americans.

Not long after that, Sen. , a Republican, correctly characterized Clapper's testimony."What I'm saying is that the director of national intelligence, in March, did directly lie to , which is against the law," Paul said. "He said that they were not collecting any data on American citizens."

Of course it was a lie. Clapper kept his power long enough to help weaponize the intelligence services for domestic political use.

Not that many years ago, a lot of Americans began saying they didn't mind if intelligence services searched their cellphones.

"Let the government look," was the line adopted by many. "I have nothing to hide."

Of course, you have nothing to hide. What is there to hide anymore?

For the class of 2023 and for my sons in their early 20s, the one constant in America for the past 18 years isn't the use of phones to find love.

Cameras everywhere. Facial recognition everywhere. On every street, in stores, cameras watching your every move.

Wedded to their phones and herded into what will become a cashless society, the cyborgs are tracked, and marketed, their thoughts understood or at least chronicled and recorded. They become product.

I suppose that's something to cry about, but then, we're encouraged to save our real tears for those TV shows, aren't we?

Hey, would you please pass the tissue?