Iran, Burisma and Hunter Biden: The Democrats' terrible decision to go all in on impeachment 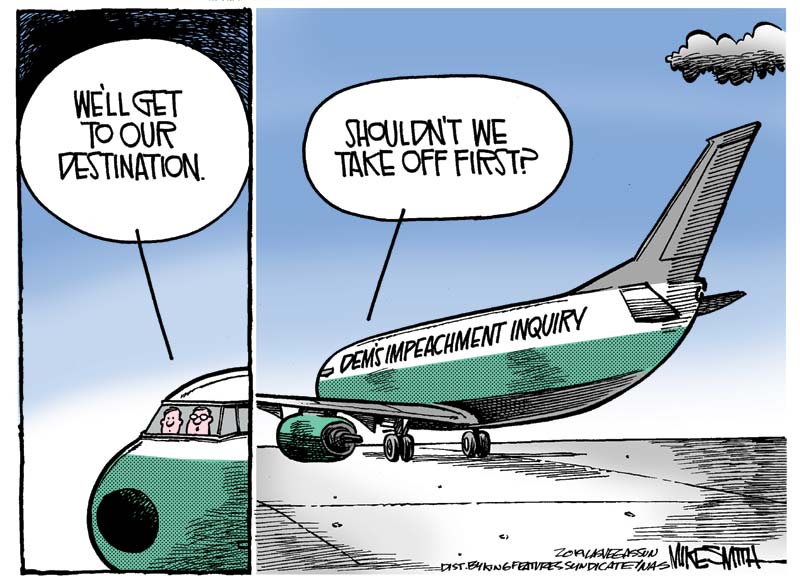 When Britain, Germany and France issued a joint statement blaming Iran for the attack on the Saudi Arabian oil refinery this week, it represented a major shift in the world's approach to the rogue regime in Tehran.

While paying lip service to the dead Joint Comprehensive Program of Action (JCPOA) - the "Iran nuclear deal" - our European allies demanded of Iran that the mullahs engage in broad, long-range negotiations. That's thinly veiled code that requires Iran to abandon its ballistic-missile program, the export of terrorism, and all nuclear weapons research and uranium enrichment.

This collective turn toward the American approach to Iran - toward realism and away from appeasement - was a significant win for the United States. Iran's act of war obliged even the reluctant Europeans to openly underscore the nature of Supreme Leader Ayatollah Ali Khamenei's rule.

This breakthrough was obscured by release of the rough transcript of the call between President Donald Trump and Ukrainian President Volodymyr Zelensky. The call and the whistleblower complaint that surfaced the transcript quickly sucked all other stories from the news cycle even though there is zero chance of Trump being convicted of an impeachable offense and removed from office. Zero. Sen. Lindsey Graham of South Carolina spoke for the vast majority of Republican senators when he declared, "to impeach any president over a phone call like this would be insane."

So a matter of enormous and long-term international consequence - an act of war by Iran and the reforming of a coalition to oppose its aggressions - was obscured, if not wholly obliterated in the public's mind, by an absurd coda to the special counsel's investigation that consumed two years of nightly cable news. Absurd because there is no drama here, there are no undecided minds.

If House Democrats ever dare pass an article of impeachment, it will quickly be dispatched by the Senate, though Majority Leader Mitch McConnell, R-Ky., may well use the Senate trial to extract a huge price from Democrats in the form of extended inquiry via witnesses and cross-examination of everything connected to Hunter Biden's dealings in Ukraine, dealings only hinted at in this summer's New Yorker profile.

(Indeed, if the standard used by the Obama-Biden-era FBI and Justice Department to secure a Foreign Intelligence Surveillance Act warrant against Carter Page were applied, Hunter Biden would have been under surveillance from 2014 on, and all of his vulnerabilities to compromise closely monitored by the FBI.)

So sudden was the pivot to all things Ukraine that Democrats such as presidential candidate Sen. Elizabeth Warren of Massachusetts scrambled to articulate conflict-of-interest policies that would prevent another Hunter Biden scenario down the road. Piecing together a chronology of Biden the Younger's dealings and his many other woes relative to his father's travels, actions and pronouncements, plus reactions to that chronology when understood from all Democratic candidates and, of course, the president's Twitter feed, will take weeks. This preliminary effort portends what National Review's Jim Geraghty predicted will become the political equivalent of the Battle of the Somme.

But "the Bidens and Burisma" represent only the first wave of over-the-top frontal assaults. If the Democrats are driven by their crazed base to actually passing an article of impeachment, the political earthquakes will have just begun. McConnell has shown time and time again that when Democrats sow the wind, he will oblige them to reap the whirlwind. This will not be a replay of President Bill Clinton's impeachment "trial" of January 1999, which came after the public voted its displeasure.

(There is one good thing embedded in the Democrats' frenzy: House Speaker Nancy Pelosi's (California) strategy of a "narrow impeachment inquiry" contains an implicit but very definite concession of "No collusion. No obstruction." Turns out Democrats are admitting the Mueller inquiry of two years came up empty.)

The Democrats have set the stage not for Trump's removal from the Oval Office but for an epic denouement of the battle that has gripped the Manhattan-Beltway elites since the shock of November 2016. That upset had profound effects on the left. It shattered their certainty that their "side of history" would triumph, just as Iran's refusal to act as a normal nation ought to have shattered their confidence in the genius of the JCPOA. The left has lost any sense of how it is perceived in the land outside the Beltway. It has lost the ability to be serious about serious things, such as Iran's attack and our allies' response.

Only shock therapy can save the Democrats, and it is coming. A Justice Department inspector general report into surveillance of American citizens based on the Steele dossier is coming. If indictments are warranted, U.S. Attorney John Durham will be bringing them. And a deep dive into Ukrainian natural gas company Burisma, and its well-connected board member named Biden, is imminent. A new book by the Wall Street Journal's Kimberly Strassel, "Resistance (At All Costs)," which comes out Oct. 15, will shape the political battlefield in the United States because it will be lifted up to enduring best-seller status by center-right media as the condensed and accurate retelling of the events of 2016 until today.

Sadly, it's all a sideshow to the showdown with the most imminent threat to global stability: the increasing recklessness of Iran. We have to hope our domestic drama moves quickly to its inevitable conclusion so that we can focus again on our common, very real enemy.