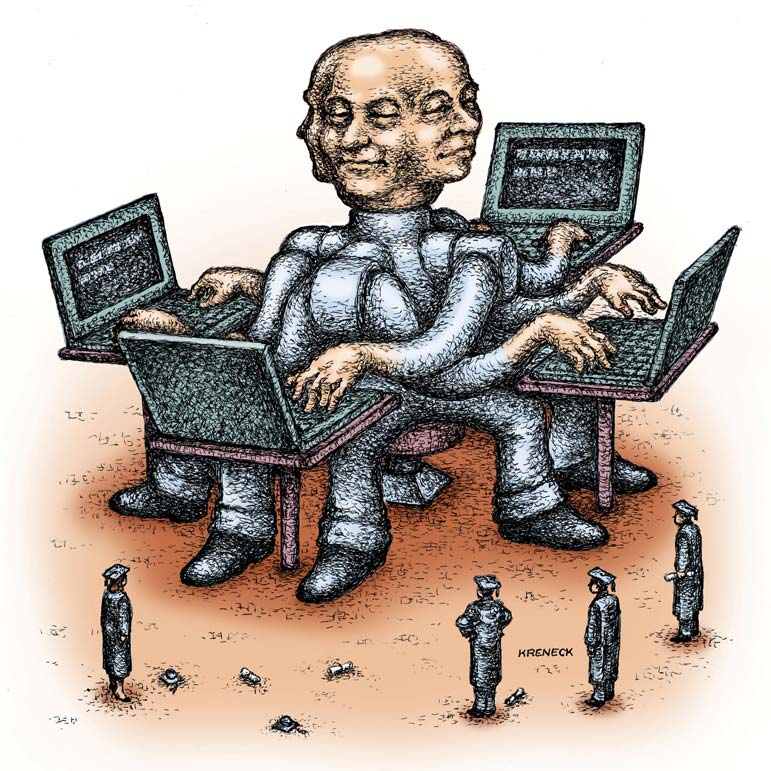 Poor Oregon. Not content to be one of only two states that still ban self-service gas stations, it may soon decide to limit to two the number of automated checkout lanes in a store.

That would be the practical effect of the wordily named Grocery Store Service and Community Protection Act, a proposition that unions are pushing for the November ballot.

I love Oregon, one of the most beautiful states in the country. And I understand that cashiers are worried about their jobs. But the restriction is a bad idea, the latest in a long string of special-interest limits on shopping that have wound up in history's dustbin.

When we debate the wisdom of a limit on autonomy, the burden should always be on the side arguing for less freedom. So what's the case in favor of the restriction? Here's Portland's ABC television affiliate:

"Oregon AFL-CIO President Tom Chamberlain said the unions took up the issue because they feel the self-checkout machines are part of a 'deliberate corporate strategy' to reduce labor costs and eliminate jobs.

"He also said it disproportionately impacts workers of color and poses a challenge for customers, particularly the elderly and those with disabilities."

Although the "workers of color" adds a nice contemporary touch, the argument isn't that different from those that have been made against nearly every effort to make shopping easier for customers. A lot of freedoms shoppers now take for granted were fiercely opposed by powerful interests and the regulators who listened to them. Here it might be instructive to take a brief trip through history.

Let's begin with Oregon's controversial ban on self-service gas stations in most of the state. The prohibition has been the subject of much mockery, but when adopted in 1949, the legislation was hardly unusual. At least a dozen states, along with a number of major cities, prohibited self-service stations in whole or in part.

Looking back, it's easy to see this as interest-group legislation, but at the time the prohibitions were defended as progressive, protecting the safety of a public that might otherwise cause gasoline spills and even fires. Localities that banned the stations considered themselves morally superior to those that didn't.

In 1947, a Pennsylvania newspaper mocked the self-service stations springing up in Southern California as "tourist attractions" that survived only because "pretty girls" on roller skates took your money, but forced you to dirty your hands checking your own tire pressure and cleaning your own windshield.

But self-service was suddenly everywhere. Butcher shops worried about the large grocery stores where the meat waited, pre-cut and pre-wrapped, for the consumer to make a choice.

In 1949, after self-service meat counters became a big hit in the Chicago suburbs, unionized meat cutters organized against a proposal to allow them within the city limits.

The Chicago Tribune editorialized that the union was inconveniencing consumers sick of the "bottleneck" at the meat counter, to say nothing of standing in the path of technological progress.

(Self-service meats had become possible due to the rise of relatively inexpensive refrigeration.)

Nowadays, we think nothing of picking painkillers and vitamins off a shelf, but once upon a time resistance to the practice was similarly stout. In the 1950s, Pennsylvania pharmacists demanded a ban on pharmacy counters inside self-service food stores, arguing that allowing them would harm consumers.

Around the same time, Minnesota's pharmacy board adopted a rule forbidding drug stores to sell "any article" except from behind the counter, a ban that led to a lawsuit challenging its constitutionality.

(A quick database search failed to turn up the outcome.)

Skip a generation. Consider something as simple as stepping up to the ATM to get cash. In the late 1970s, when the machines were new, local banks successfully prodded many localities to ban the use of the machines by consumers whose accounts were located in other states. Rep. Frank Annunzio, a powerful member of Congress from Illinois, warned that using automated teller machines amounted to "a gigantic game of Russian roulette."

All of which is to say that the effort in Oregon to restrict automated checkout lanes falls into a common, if reactionary, historical pattern. Of course we all hate it when technological advance puts people out of jobs. Presumably there were those who hated the same trend when it gobbled up the butchers and the druggists. But in the end, shoppers still preferred to avoid the wait at the butcher counter and the pharmacy counter.

Time spent waiting in line is a cost to the consumer. Like pre-cut meats and medicines on the shelf, automated checkout lines make shopping in stores cheaper. If protective legislation keeps the costs of shopping artificially high, consumers will simply shift more of their spending to the online world.

True, not everyone will calculate utility the same way. The internet abounds with calls for boycotts of the automated checkout lanes. Some shoppers, in solidarity with potentially displaced workers, are refusing to use them. Those are reasonable matters of private choice.

But to limit the freedom of consumers to make up their own minds is to stand in a protectionist tradition that history has wisely discarded.

(Buy the author's latest book, Invisible: The Forgotten Story of the Black Woman Lawyer Who Took Down America's Most Powerful Mobster, at a 37% discount! by clicking here or order in KINDLE edition at a 50% discount, just $14.99 by clicking here. Sales help fund JWR.)