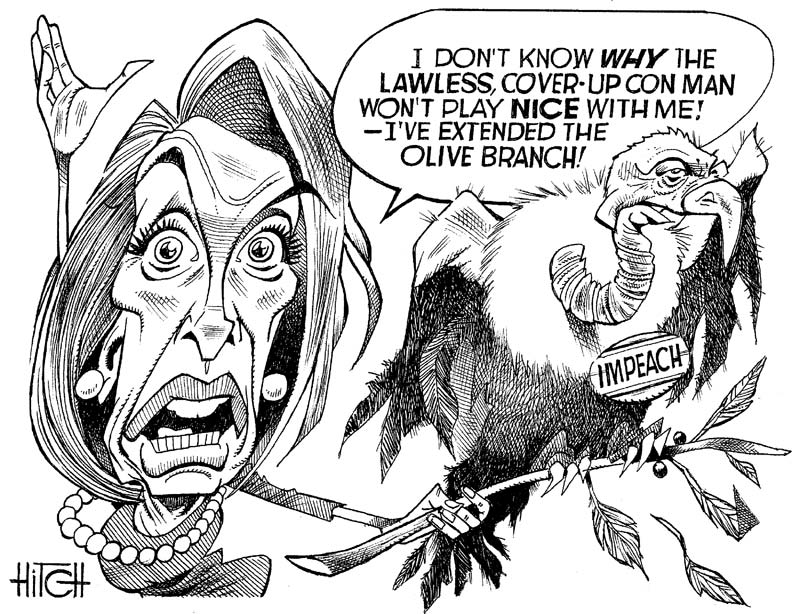 WASHINGTON - The impeachment inquiry launched Tuesday by House Democrats can be cast as an epic battle between House Speaker Nancy Pelosi, D-Calif., and President Donald Trump. More fundamentally, it is a constitutional clash that will help define the limits on presidential power, and the balance of power between the executive and legislative branches.

Pelosi and Trump have circled each another from the moment she retook the gavel after a surge of anti-Trump voters knocked House Republicans out of the majority in the 2018 midterms. The president learned almost immediately that the speaker was someone with a keen sense of strategy and the tenacity to go with it. He lost their first battle, over a government shutdown, and came out of it with a clearer understanding of his chief adversary.

That shutdown battle was child's play compared with what Pelosi's impeachment inquiry decision has touched off. After months of hesitation and after numerous House committees were stymied in their efforts to investigate the president, Pelosi took a step that barely a week ago seemed nearly unthinkable. That of course was before anyone knew much at all about the president's effort to force Ukraine to investigate former Vice President Joe Biden and his son Hunter.

There is no turning back. So much now hinges on what happens with the inquiry, though given the makeup of the Senate and the requirement of a two-thirds majority, it remains highly unlikely that the president would ever be convicted in an impeachment trial. Nonetheless, as a result of the proceedings now beginning, Trump will either be out of office by January 2021 or he will have emerged victorious, reelected to a second term in large part because of what would then, predictably, be interpreted as a gamble by the speaker that went terribly wrong.

Those are some of the stakes, and so the personal struggle is an irresistible part of the story. That might not be Pelosi's ideal, as she has cast this in constitutional rather than personal terms. But it is inevitable, given the history between the two. And Trump will do everything in his power to make this as personal as possible-and all about himself, the victim of what he immediately branded as another Democratic witch hunt.

Trump's attacks on the legitimacy of the investigation by special counsel Robert Mueller helped shape and divide public opinion in advance of a final report that, while providing evidence of obstruction by the president, brought no immediate move to impeach him by Pelosi and House Democrats.

Public opinion was not on the side of impeachment then, and it remains to be seen whether the new revelations about Ukraine will change that. At the start of this battle, Trump and his allies have begun to do what they did during the Mueller investigation, which is to keep the nation as divided over this as it has been generally over his presidency. Even while attending to business at the United Nations, he immediately began enlisting his allies to take to the barricades to protect him from the Democrats.

This is much more than a personal struggle, however, and one reason that Pelosi moved as she did on Tuesday, in addition to the fresh revelations about Trump and Biden and Ukraine, was to protect and defend against a president who has so stretched the limits of his office that there seemed no way other to check him than to move toward possible impeachment. Seen from the speaker's office, it was a necessary, if not a preferred, step, given the political risks.

Presidents have long usurped power from Congress. There has been a steady accretion of power by the executive, often as a result of a supine legislative branch. But perhaps not since the impeachment of Andrew Johnson in 1868 has a Congress been so constitutionally and repeatedly aggrieved by the actions of a sitting president.

It took a long period of conflict between Johnson and the Radical Republicans in Congress, during which Johnson repeatedly flaunted his powers, before Congress finally snapped and tried to stop him by impeaching him. At the heart of the conflict were issues of race and of what kind of nation would emerge after the Civil War. Though there were various articles of impeachment drawn up, the strongest encompassed the issue of abuse of power by Johnson.

That is where House Democrats are now heading, to counter a president who they believe has repeatedly abused his powers, first during the Mueller investigation and now by allegedly trying to ask a foreign government to dig up dirt on a potential 2020 president challenger. It could be a messy road ahead.

Six House committees are investigating aspects of the Trump presidency and Trump's business ventures, looking for possible wrongdoing including but not limited to what was contained in the Mueller report. So far nothing has emerged that hasn't been known for many, many months. The beginning of an impeachment inquiry will give House investigators added ammunition to fight through the legal battles for documents and testimony they so far have been denied and which could reveal facts unknown.

Time is now a factor. The House committees have spent nine months mostly spinning their wheels, locked down in legal battles with the White House. Even if they can gain relatively quick access to the information they are seeking, there is no guarantee that they will find the kind of smoking gun that forced Richard M. Nixon to resign the presidency ahead of what seemed certain impeachment.

House Democrats will have the power to draw up articles of impeachment and put them to a vote on the House floor. With their majority, the chances winning that vote would appear to be good, which would move the proceeding to the Senate for a trial.

In the case of Andrew Johnson, what began as easily understood arguments about presidential power quickly turned into mind-numbing legalities in the Senate trial, often so obscure that the public either lost interest or simply lost their way, as historian Brenda Wineapple describes in her recent and timely book, "The Impeachers: The Trial of Andrew Johnson and the Dream of a Just Nation."

Though Johnson was acquitted, the impeachers made their point by standing against him. He survived the trial in the Senate, but he was soon out of office as a result of the 1868 election. He was not even on a national ticket in that election.

That is something Trump likely does not have to worry about. The machinery of the Republican Party has done what it can to protect him from a serious primary challenge, though he has several challengers. As the impeachment inquiry begins, Republican elected officials, with almost no exceptions, are declining to speak out against him.

The question now is whether he will emerge significantly weakened from the coming impeachment proceeding or strengthened by having survived the whole spectacle to move enough voters to reject the Democratic nominee and give him four more years in office.

This is a clash that has been coming since the start of Trump's presidency and one, like that of Andrew Johnson, that may have become necessary regardless of the outcome. Constitutional and institutional principles are at stake. Pelosi has now decided to draw her line in the sand. Her party, the president and the entire country will live with the consequences.