When a foreign adversary meddled in a presidential election 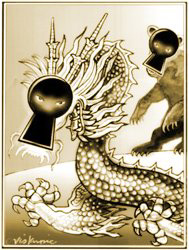 In the 1990s, a hostile foreign power meddled in our presidential election. There were serious questions about whether one party's candidate -- the beneficiary -- was complicit in the meddling, or at least looked the other way while it was going on.

The candidate fiercely resisted the appointment of a special prosecutor, then known as an independent counsel, to investigate. Finally, amid only moderate media interest and public concern, it all faded away.

The country doing the meddling, of course, was China, and the presidential candidate was Bill Clinton, who was already in the White House and seeking re-election in 1996.

Looking back on press accounts from the era, it's striking how brazen a number of the players were as they went about the task of funneling illegal foreign donations to the Clinton campaign and the Democratic National Committee. The names have been mostly forgotten now -- Charlie Trie, John Huang, Johnny Chung -- but the record remains.

Chung, for example, who was born in Taiwan and became a U.S. citizen, was a prolific Democratic fundraiser. Between 1994 and 1996, he gave $366,000 to the DNC and visited the Clinton White House more than 50 times.

In 1995, Chung gave a $50,000 check to first lady Hillary Clinton's chief of staff at an event on the White House grounds. His memorable explanation: "I see the White House is like a subway -- you have to put in coins to open the gates."

In May 1999, Chung testified before the House Government Oversight Committee. He said that in 1996, during the Clinton re-election campaign, he met with the head of Chinese military intelligence in the basement of a restaurant in Hong Kong. "We really like your president. We hope to see him re-elected," the Chinese spy, Gen. Ji Shengde, told Chung, according to Chung's testimony. Gen. Ji continued: "I will give you 300,000 U.S. dollars. You can give it to the president and the Democratic Party."

"Chung's testimony has provided investigators the first direct link between a senior Chinese government official and illicit foreign contributions that were funneled into Clinton's 1996 re-election effort," the Los Angeles Times reported. "It is the strongest evidence -- in two years of federal investigation -- that the highest levels of the Chinese government sought to influence the U.S. election process."

In the great tradition of shady operators, Chung ended up taking a lot of the money for himself. But some of the cash from the head of Chinese military intelligence -- that is, the People's Liberation Army -- made its way into the Clinton re-election campaign and other Democratic efforts.

Earlier, Chung had testified before a grand jury that he had also contributed money that came from another officer in the People's Liberation Army and from the son of China's top military commander. Chung pleaded guilty to bank fraud, tax evasion and conspiracy in connection with some of his illegal contributions. He was sentenced to probation.

Then there was Charlie Trie, who raised $1.2 million in foreign money for the Clinton legal defense fund and the DNC. In March 1996, Trie dropped off a donation of $460,000 at the Washington offices of the defense fund, with some of the money in sequentially numbered money orders made out in the same handwriting. He visited the White House 22 times. He pleaded guilty to violating federal election laws and was sentenced to probation.

There was also John Huang, the Democratic fundraiser who raised more than a $1.5 million from illegal foreign sources. He visited the White House 78 times. Huang was an agent for James Riady, an Indonesian businessman with extensive ties to China. The Senate Governmental Affairs Committee found that Riady had "a long-term relationship with a Chinese intelligence agency." He pleaded guilty to campaign finance violations and was sentenced to probation, plus a multimillion-dollar fine.

The scandal was news at the time; indeed, some print outlets, like the Los Angeles Times, led the way in uncovering it. The story received far less coverage on television, where several news outlets appeared distinctly uninterested. Overall, it would probably be fair to call the coverage moderate-to-restrained.

The rhetoric was restrained, too. To use one measure, it did not lead to widespread use of the word "treason" in the public discussion of President Clinton.

Of course, the circumstances and facts are different, but it seems reasonable to say that for whatever reason, Washington is far more upset about Russia's attempt to influence the election in 2016 than it was about China's attempt to do the same 20 years earlier.