Some Caution, Please, Before We Go Too Far With McCain Tributes 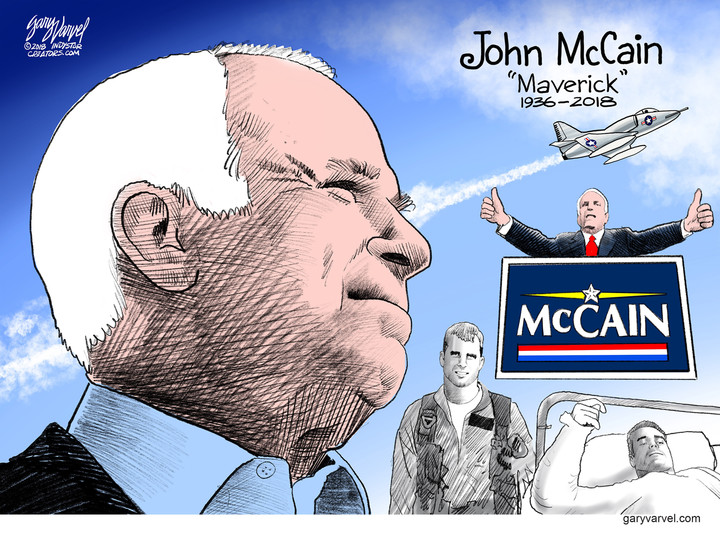 John McCain was laid to rest in a private ceremony on the grounds of the U.S. Naval Academy, his cherished alma mater.

We've begun the debate over how to properly honor the storied naval aviator/prisoner-of-war, also known to the nation as a 36-year veteran of Capitol Hill and two-time presidential candidate.

That discussion began with whether to rename the Senate's Russell Office Building in McCain's honor ("McCain SOB", the jokes goes).

And I'm guessing that pressure might mount to give the late senator a permanent standing place in the National Statuary Hall Collectionin the United States Capitol.

But for that to happen, one of the two current statues representing the State of Arizona will have to be removed. That means parting ways with Barry Goldwater, who's been on display since 2015 (ironically, it was McCain who inherited Goldwater's seat). Or, the dishonor goes to the Jesuit missionary Eusebio Kino, who was added to the collection all the way back in 1965, two years before McCain entered captivity in Hanoi.

No doubt there will multiple tributes to John McCain in granite, cement and bronze in the months ahead. But with these accolades come three questions: what were the senator's expressed wishes; when do the tributes go overboard; and how do we separate politics and payback from nobler veneration?

Or consider the fate of the dominant executive presences in Washington in modern times.

Ronald Reagan's name can be found a large trade building in the nation's capital (the delays and cost-overruns in completing that structureperhaps confirming Mr. Reagan's worst suspicions about big government).

It's a short drive from Reagan National Airport â€“ not the 40thpresident's airport of choice (that would be Joint Base Andrews). However, a Republican Congress insisted otherwise.

Franklin Roosevelt may have it worse.

Not long before his death in 1945, the 32ndPresident of the United States confidedthat a memorial dedicated to him should be nothing larger than the size of a desk â€“ on a patch of grass near the National Archives Building.

What did Roosevelt receive? A seven-acre tribute awash in sanitized p.c. controversy(FDR was depicted in a chair with small wheels, as opposed to an actual wheelchair; his trademark cigarette was missing as was Eleanor's fur boas).

One month after the shooting in Dallas, New York's Idlewild Airport became John F. Kennedy International Airport (Teddy Kennedy was on hand for the official ceremony on Christmas Eve, 1963). City officials made sure Mrs. Kennedy was on board; and JFK actually used the airport not long before his death.

More complicated is the changing of Cape Canaveral to Cape Kennedy.

Getting back to McCain, is renaming one of the Senate's three office buildings in his office the right move? I ask because another worthy candidate attended Saturday's National Cathedral service: Bob Dole.

The argument for Dole, who turned 95 in July and spends his Saturdaysgreeting fellow veterans at the National World II Memorial that he helped bring to fruition: while he doesn't have McCain's Senate longevity (Dole served 27 years), upuntil this summerDole was the longest-serving Republican leader in the chamber's history. Dole doesn't have McCain's national standing. But one can argue he's more of a creature of the institution

In June 1996 Dole resigned from the Senate to focus on his presidential run (here'shis farewell remarks). Feel free to name the last time a longtime Washington insider has voluntarily surrendered power.

One other difference with a Dole building ceremony. It likely won't be a repeat of the National Cathedral service and the thinly-veiled allusionsas to the awfulness of Donald Trump vs. the heroism of John McCain.

Not that Bob Dole is any less heroic â€“ wounded in combat service in Italy, his wounds required three years of therapy, with the future senator losing the use of his right arm. However, it's hard to imagine a Dole service being the same grinding of political axes(bashing Trump, excluding the likes of Sarah Palin and out-of-favor aides) that was part of this week's McCain narrative.

How then to honor John McCain? A bipartisan committee â€“ a Senate "gang"â€“ is figuring exactly that. Renaming the hearing room of the Senate Armed Services Committee would seem a no-brainer. Back in Arizona, some might suggest renaming Phoenix's Sky Harbor Airport, but there's already a terminalin McCain's honor.

Kiddingly, his former colleagues could put a McCain portrait in the Senate Radio-Television Galley. The late senator often jokingly referred to the press as "my base".

Finally, the U.S. Navy. A destroyer bearing the name of the two admirals named John S. McCain now includes the senator's name as well. What about an aircraft carrier? A planned fourth carrier in the new Fordclass is yet unnamed. But the line forms to the rear of presidential giants (FDR) and traditional carrier names that would be just as appropriate.

There's one other option for the "gang" to ponder: instead of renaming objects after John McCain, try honoring his spirit. Be honest. Be blunt. Be difficult. Believe in America. And strive for progress and a better brand of politics.