RETIRING GOP SENATORS: Hold off on vote on Kavanaugh until accuser is heard 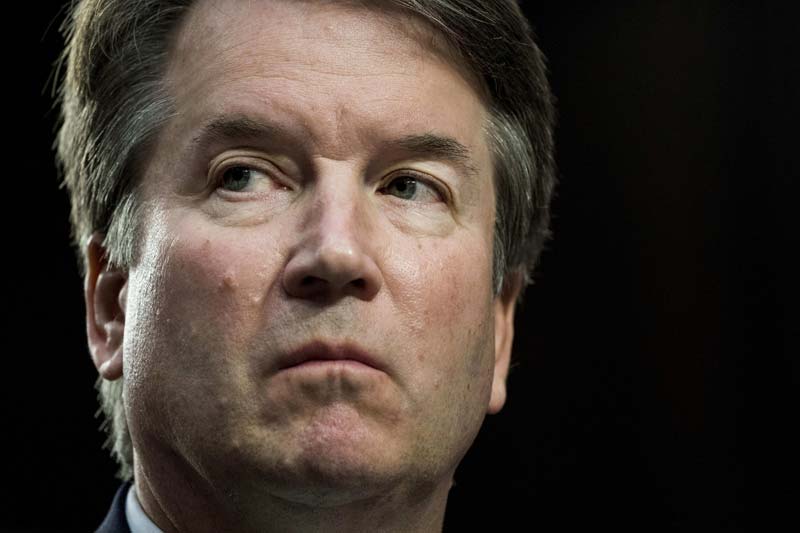 WASHINGTON - The White House on Sunday stood by Brett M. Kavanaugh after a woman publicly accused him of sexual assault decades ago, an allegation that triggered the most concrete signs yet of Republican resistance to President Trump's Supreme Court nominee.

With the nomination suddenly in doubt, Senate Judiciary Committee Chairman Chuck Grassley, R-Iowa, was working to arrange follow-up calls with Kavanaugh and Christine Blasey Ford, the woman who said he assaulted her when the two were in high school.

Sens. Jeff Flake of Arizona and Bob Corker of Tennessee, two Republicans who are retiring at year's end, joined Democrats in urging a delay in the vote until the committee hears from Ford. The panel is scheduled to vote Thursday afternoon on Kavanaugh's nomination.

The Washington Post published a story Sunday afternoon that included an interview with Ford. The report marked the first time her identity had been revealed publicly and her first public comments about the allegation.

Ford told The Post that one summer in the early 1980s, Kavanaugh and a friend - both "stumbling drunk," Ford alleges - corralled her in a bedroom during a gathering of teenagers at a house in Montgomery County, Maryland.

While his friend watched, she said, Kavanaugh pinned her to a bed on her back and groped her over her clothes, grinding his body against hers and clumsily attempting to pull off her one-piece bathing suit and the clothing she wore over it. When she tried to scream, she said, he put his hand over her mouth.

Kavanaugh "categorically and unequivocally" denied the accusation in a statement, and the White House maintained on Sunday that it is not withdrawing its nomination. The developments marked the latest chapter of a contentious battle over Trump's nominee that has grown increasingly divisive as it approaches its final stages.

In an interview with The Washington Post, Flake said that Ford "must be heard" before a committee vote.

"I've made it clear that I'm not comfortable moving ahead with the vote on Thursday if we have not heard her side of the story or explored this further," said Flake, who is one of the committee's 21 members. Republicans hold an 11-to-10 majority on the panel, and Flake's opposition to a vote could stall the nomination.

Flake would not specify what form the communication with Ford should take or how he would vote. But he emphasized the significance of the allegations.

In a statement, Corker said a delay "would be best for all involved, including the nominee. If she does want to be heard, she should do so promptly." Senate Republicans hold a 51-49 majority, and cannot afford the loss of two or more senators voting for Kavanaugh's confirmation.

Judiciary Committee spokesman Taylor Foy said in a statement that "given the late addendum to the background file and revelations of Dr. Ford's identity, Chairman Grassley is actively working to set up such follow-up calls with Judge Kavanaugh and Dr. Ford ahead of Thursday's scheduled vote."

Republicans reached out to Democrats on Sunday to try to schedule separate calls for Monday with Kavanaugh and Ford. But Democrats had not agreed, officials familiar with the back-and-forth said, and Sen. Dianne Feinstein, D-Calif., demanded that the FBI reopen its background investigation of Kavanaugh, 53.

Garrett Ventry, another spokesman for committee Republicans, said in response: "Democrats have chosen once again to call for delay."

The allegation injects uncertainty into the prospects for Trump's second nominee for the court, roils the midterm elections - which have seen a record number of women seek elected office - and carries high-stakes implications for the court.

If the White House withdrew the nomination or Kavanaugh bowed out, the Senate would not have enough time to confirm a justice before the new court session begins Oct. 1, leaving it with eight justices. The court operated with eight justices for almost a year after the February 2016 death of Antonin Scalia and Republicans' subsequent refusal to consider Merrick Garland, President Barack Obama's pick.

Any new nominee may have to wait until after the midterm elections, with increasing signs that Democrats could capture the Senate majority. Senate Republicans had argued that the position of red-state Democrats on Kavanaugh would be a factor in their reelection - an issue that would be moot if the nomination is scuttled.

Republicans face a potential backlash from female voters, especially suburban women, if they press ahead despite the allegation. In 1991, outrage over the Senate confirmation of Clarence Thomas despite allegations of sexual misconduct from his former colleague Anita Hill was among the factors that led to the election of dozens of female candidates.

Twenty-seven years later, the Senate is considering another Supreme Court nominee in the #MeToo era, which has seen a wave of allegations that have cost many prominent men in business, the media and Congress their jobs.

Earlier Sunday, Republicans had signaled that they planned to try to confirm Kavanaugh by the end of the month.

Foy issued a statement vouching for Kavanaugh's integrity and saying it was "disturbing that these uncorroborated allegations from more than 35 years ago, during high school, would surface on the eve of a committee vote after Democrats sat on them since July."

Sen. Lindsey Graham, R-S.C., said he agreed with the committee's concerns about the "substance and process" regarding Ford's allegation - although he said he would "gladly" listen to her if she wanted to talk to lawmakers.

"If the committee is to hear from Ms. Ford, it should be done immediately so the process can continue as scheduled," Graham, a member of the committee, said Sunday afternoon.

Senate Democrats in leadership and on the committee swiftly called for a delay.

"To railroad a vote now would be an insult to the women of America and the integrity of the Supreme Court," Senate Minority Leader Chuck Schumer, D-N.Y., said in a statement.

In a tweet after The Post's report, Sen. Doug Jones, D-Ala., said it was "a very brave step" by Ford to come forward.

"It is more important than ever to hit the pause button on Kavanaugh's confirmation vote until we can fully investigate these serious and disturbing allegations. We cannot rush to move forward under this cloud," said Jones, a potentially key swing vote who has not announced whether he will support Kavanaugh's nomination.

A representative for Senate Majority Leader Mitch McConnell, R-Ky., did not comment.

Hours before The Post's report was published Sunday, a centrist Democratic senator and two of his Republican colleagues argued that the allegation against Kavanaugh - which at that point Ford had not confirmed publicly - should have been raised sooner in the Senate and predicted that it would not prevent the chamber from moving forward with Kavanaugh's nomination.

Feinstein, the ranking Democrat on the Senate Judiciary Committee, said in a statement that now that Ford has shared her story, "it is in the hands of the FBI to conduct an investigation. This should happen before the Senate moves forward on this nominee."

The FBI doesn't plan to investigate the allegation as a criminal matter, but Feinstein wants the bureau to review it as part of Kavanaugh's background check, a spokesman said.

Feinstein also wrote an op-ed published in the Los Angeles Times on Sunday formalizing her opposition to Kavanaugh's nomination and briefly referencing her decision to share the letter's contents with the FBI.

Many Democratic senators have declared their opposition to Kavanaugh, but not a single Republican has publicly opposed him.

The two most closely watched Republican senators are Susan Collins of Maine and Lisa Murkowski of Alaska, moderates who favor abortion rights and have broken ranks with their party in the past, including during the failed Republican effort to repeal and replace the Affordable Care Act last year.

Neither has said how she plans to vote on Kavanaugh. Representatives for the two senators did not immediately respond to requests for comment Sunday.