Before the Trump op-ed, another mysterious anonymous author lit up Washington 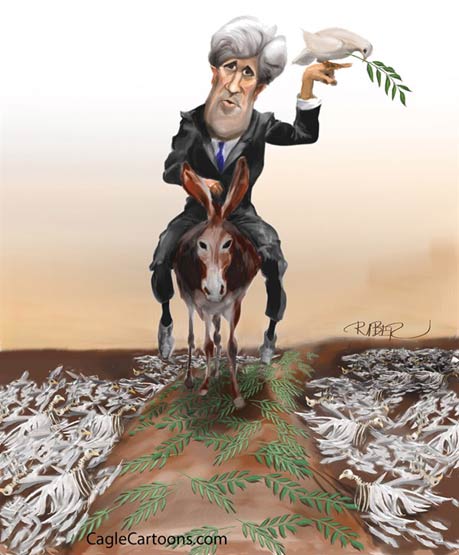 John Kerry has many passions. He loves the Boston Red Sox. He adores his wife, Teresa. He relishes diplomacy and bicycling. What John Kerry is most fond of, though, is John Kerry.

This is what stands out in his new memoir, "Every Day Is Extra." It's Kerry's mastery of faux modesty. He writes like the guy who apologizes for his worn-out running shoes because, try as he might, he just can't give up his cherished marathons.

Consider the 2009 inauguration. Kerry relays that former President Barack Obama signed his program with the inscription, "I'm here because of you." It was a reference to Kerry's decision five years earlier to give Obama a prime speaking slot at the Democratic convention in Boston, where Kerry was the presidential nominee and Obama was just an ambitious state senator.

If Kerry had just left it there, it would be a simple brag. What turns it into a humble brag is that Kerry lets the reader know he actually disagreed with the new president's assessment. "Of course, I didn't think that was true," Kerry writes. Obama was a terrific politician in his own right. Nonetheless, Kerry allows himself to speculate: "What if we hadn't tacked on a jobs event on the South Side of Chicago in 2004 and I hadn't met him again in the campaign?" Maybe Kerry really did make Obama's career after all.


Kerry's humble-bragging is most evident when he talks about his physical injuries. He recounts the story of a painful accident he suffered playing broom hockey in Sun Valley, Idaho, with some kids and his neighbor (perhaps you've heard of him: Tom Hanks). Kerry broke his nose and bruised his face. Yet the secretary of state was needed in Oman. "I grabbed a pair of big black sunglasses and off I went," he writes. Then there is his infamous 2015 bicycle accident in the French Alps that caused him to spend the final rounds of negotiations over the Iran nuclear deal on crutches.

When Kerry was visiting Israel in 2009 as the chairman of the Senate Foreign Relations Committee, he made it a point to visit Gaza over the objections of the U.S. embassy in Israel. Touring a refugee camp, he just couldn't stay in his armored car. So he got out to talk to a little girl playing by the road. The resulting photo of Kerry "walking amid the rubble was worth more to the Palestinian people than a thousand statements," Palestinian leader Mahmoud Abbas later told the senator, according to the senator.

And on it goes. Some chapters in Kerry's career, however, cannot be spun. One example is his unrequited pursuit of his Russian counterpart, Foreign Minister Sergei Lavrov. Kerry tries to retain some pride by noting that he eventually did read the Russian diplomat the riot act, in September 2016 at a meeting of the U.N. Security Council. The timing is damning: That was after Russia and Syria had put the lie to a cease-fire Lavrov and Kerry had negotiated that summer.

Kerry's confrontation with Lavrov also happened after the U.S. secretary of state had he helped negotiate the Iran nuclear agreement in 2015. The Russian diplomat was a player in that drama as well.

At midnight in one of the last negotiation sessions, Lavrov seemed to taunt Iranian Foreign Minister Javad Zarif, asking him if he were really authorized to accept Kerry's final offer. Zarif took umbrage. "Angry, he rose off the sofa and started to move toward the door, forcefully objecting to Lavrov's taunt," Kerry writes. The secretary of state hobbled over to Zarif to stop him from leaving. "I know Sergei didn't mean to insult you," Kerry says he told Zarif. Eventually the Iranian foreign minister explained that he needed one more sweetener. Kerry went back to his team and found some more Iranians to take off the sanctions list. Zarif accepted the deal.

What's striking about this anecdote is not necessarily that Kerry presents himself as peacemaker but that he takes the tensions between Zarif and Lavrov at face value. There's no reason to think these tensions were real. Less than a month after this meeting, Russia and Iran struck their own agreement to further escalate the war on behalf of Syria's dictator. Lavrov never informed Kerry that his country's Air Force would be bombing targets (many of them positions held by U.S.-supported rebels) in Syria.

It was not until the fall of 2016 that Kerry fully realized the Russians were not serious about a peace deal in Syria. And while Kerry takes pains to point out his own internal frustrations with Obama and the Pentagon during this period, he nevertheless pursued a man who kept lying to him.

Kerry concludes his chapter on Syria more in sadness than in anger. "All we could do was negotiate the evacuation and surrender of Aleppo to the regime," he writes. "I've never had such a sinking feeling." In a book of humble brags, it's a welcome moment of straightforward humility.