Ford, Kavanaugh, raw emotion and the rule of law 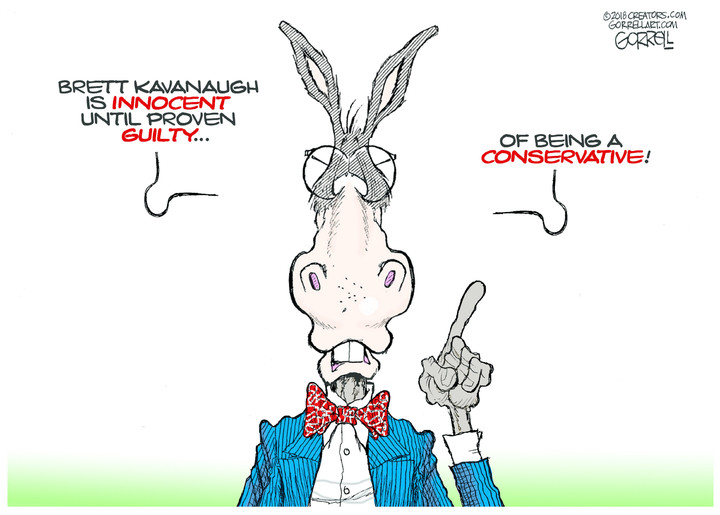 You've probably figured out that most Americans have already made up their minds about Judge Brett Kavanaugh and Christine Blasey Ford.

He's the nominee to the Supreme Court. She's the woman accusing him of sexual assault 36 years ago when they were in high school.

He denies it ever happened. She insists she's telling the truth. And both were so compelling, so believable, that it was difficult to choose between them.

And as the two testified Thursday about those allegations before the Senate Judiciary Committee, there was enough passion and raw emotion to satisfy every TV news exec in America. You'd need a crew with mops to wipe it all up off the committee floor.

He cried when he mentioned his little girls, who he said had prayed for Ford. She looked terrified when describing him at a high school party, on top of her, covering her mouth.

It was tragic. It was depressing.

But it was also ridiculous, as when Sen. Sheldon Whitehouse, the Rhode Island Democrat, tried to get Kavanaugh on a trick question:

Kavanaugh: It's a drinking game. Ever play quarters?

And he's already made up his mind anyway about Kavanaugh and Ford. Whitehouse is a Democrat. Kavanaugh is the Republican nominee of President Donald Trump.


Your wife or husband has probably already made up her or his mind too; and your brother, your sister, your kids, your friends, your priest, your barber. We're so very tribal now, and our tribal leaders use emotion to herd us.

Before the hearing began, you could flip channels and see talking heads explaining it as a contest of credibility. The witness who was most compelling would win the day. This was the idea on all the networks, all the lefty ones and the righty one.

It was a day for emotion and passion on TV.

Oh, the ringmasters talked about "corroboration" or the "lack of corroboration." But what they really wanted was opera. The moment demanded opera. And they got it.

Ford talked about how Kavanaugh and a friend, at a party, pushed her onto a bed and Kavanaugh began pawing at her, covering her mouth so that she thought she'd die. What she remembered was the "laughter."

"The uproarious laughter between the two and they're having fun at my expense," she said, in a strained voice.

Sen. Dick Durbin, the Illinois Democrat, asked her if she were sure it was Kavanaugh. "One hundred percent," she said.

But a short time later, Kavanaugh testified that he never assaulted anyone, that Ford's allegation was untrue, that his reputation has been ruined forever, that his family, his daughters, have been destroyed.

"This confirmation process has become a national disgrace," he said in his opening statement. "The Constitution gives the Senate an important role in the confirmation process, but you have replaced â€˜advice and consent' with â€˜search and destroy.' "

Senators are expected to listen to testimony, consider the records and come to conclusions. But Democrats would rather delay and bring in the FBI to delay some more. They've delayed this thing for weeks already.

Durbin played game show host and asked Kavanaugh to demand the FBI investigate whether he was lying. "Turn to your left in the front row to Don McGahn, counsel to President Donald Trump," Durbin said. "Ask him to suspend this hearing and nomination process until the FBI completes its investigation."

Kavanaugh tried to explain that he's already undergone six FBI background checks, that the FBI would only interview witnesses, not make conclusions, and that coming to a conclusion is the job of the Senate.

But the senator from Illinois frowned. And that's when I realized that Dick Durbin is a toad who could lick his own eyeballs.

A short time later, Sen. Lindsey Graham, the South Carolina Republican, ripped into Durbin and the other Democrats. Graham's face got all red.

"What you want to do is destroy this guy's life, hold this seat open and hope you win in 2020," Mr. Graham said. "This is the most unethical sham since I've been in politics."

Christine Ford has a claim of sexual assault. She seemed believable, and I'm told she must be believed. But the witnesses she said were at that party 36 years ago say there was no party.

So, what do we do when witnesses tell diametrically opposed, compelling and emotional stories?

Please don't tell me to shut up. But there was something we referred to once, called "the rule of law."

The rule of law would have us consider corroborating evidence, or the lack of any corroborating statements, like the witnesses who say there was no party.

The rule of law is not about emotion and passion. It is about logic and reason.

But when did logic and reason make for great TV or passionate politics?