Eviscerating Kavanaugh: Sen. Feinstein, have you no sense of decency? 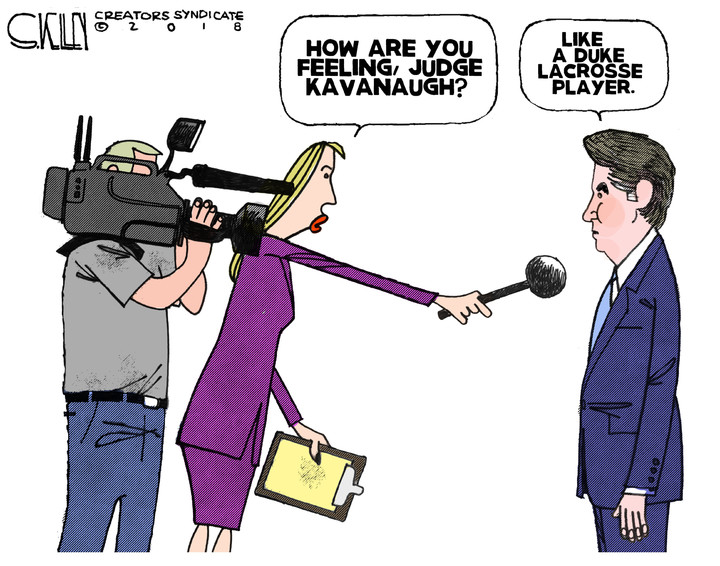 Watching the slow, public evisceration of nominee by -- on the strength of one unsubstantiated charge of alleged sexual aggression 36 years ago when Kavanaugh was in high school -- a question comes to mind:

Have you no sense of decency, ?

Decency was once an important feature of the story. Long before Bork became a verb, long before was dragged through the mud because a conservative black man proved a profound threat to , the party held fast to the notion of decency.

You'd hear about it in tales told by history teachers to frighten children, about Republican Sen. and his wild, unsubstantiated charges without evidence, of communists hiding under America's beds.

Such charges ruined reputations and careers, and took advantage of public opinion that had been whipped up during those Red Scare days.


Make no mistake. I do not and will not in any way address this question to Kavanaugh's accuser, .

Ford, a professor of psychology, has been offered the opportunity to make her charge before the , either publicly or privately. are panicking, knowing that a panel of old white men questioning Ford as to her credibility and lack of evidence would ruin them in today's #MeToo climate.

She insists the assault happened, though when she first told her story to a therapist some years ago, she did not know when, exactly, or where it took place. And she did not name Kavanaugh at the time.

And he has adamantly denied it ever happened and is willing to publicly confront the charge.

In the short term, this takedown becomes another Supreme Court nomination circus, a hideous televised grotesquerie designed by hoping to delay or stop Kavanaugh's appointment.

But there are devastating long-term effects here, too, for the republic, which is made up of all of us: of , , independents, socialists, conservatives and many apoliticals.

Out of many, one. Do they still teach that in school?

But that's fraying, too, as we fight one another over things we never fought about. For example, we're still fighting over whether it's appropriate to kneel in protest during the singing of the national anthem.

We ignore "out of many, one" and instead we become immersed in our ethnic, class-based and racial or gender-identity politics. Melting pot America is constantly mocked. Any talk of developing a national purpose will mark you as a fascist, to be shamed and kicked to the margins of society.

We become Balkanized just as the deconstructionists of the left intended.

We segregate into tribes, fighting for primacy and control over the federal authority, for what we can leverage in the way of benefits and power.

It is politics writ large.

About the last things we have left in common anymore are hot dogs and the of , the document that is interpreted by the Supreme Court.

For years, -- a party moving further and further to the left -- have found it difficult to change the direction of the country through legislation. The became their legislative refuge. Losing control has become too much to bear.

So, had a letter, written by Ford, alleging this horrible act by Kavanaugh. Yet rather than bring it up to him in private, or in public during his recent confirmation hearings, or share it with her colleagues, she artfully held back until dropping it just as the Republican majority was about to put him on the court.

Again, I'm not judging Ford here. No one should judge her heart. But Feinstein and her pals are using Ford to play a dangerous game.

Because in their zeal to delegitimize Kavanaugh and delay confirmation until after the 2018 midterm elections, the seem all too willing to delegitimize the Supreme Court itself.

Even if his nomination is confirmed by the Republican majority, the as-yet-unsubstantiated allegation of an attempted high school rape will hang from his neck for as long as he lives. And from the necks of his wife and daughters.

Ford's charge is serious business. But having them duel it out publicly, for the amusement of jabbering knaves on Twitter and TV whipping up Democratic or Republican tribal outrage, isn't the best way for a healthy republic to handle things.

Now it's a freak show. And trashing the reputation of a man who has never, to my knowledge, exhibited even hints of such behavior is the way of our politics.

It is indecent that we accept this status quo.

Long before Kavanaugh was born, at a hearing in on , , a lawyer representing the finally confronted on national television.

"Until this moment, Senator, I think I never really gauged your cruelty or your recklessness," Welch said. "... You have done enough. Have you no sense of decency?"

, have you no sense of decency?