The logical contradiction of Trump's enemies 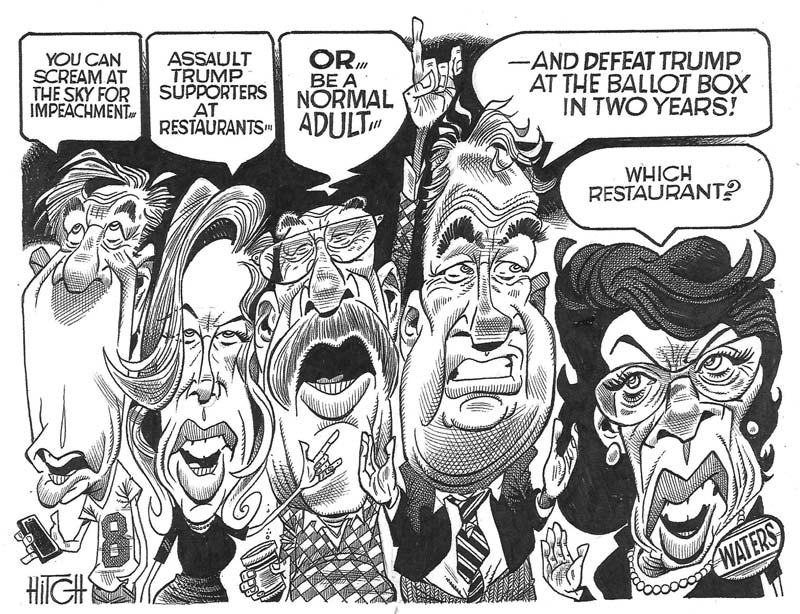 Concerning the accusation of attempted rape made by Christine Blasey Ford against Brett Kavanaugh, he has cleared his name. She points to witnesses in the room at the time, all of them have said nothing remotely like that ever took place, and yet we still hear Democratic calls for an FBI investigation. The wish apparently is that non-witnesses can convince everyone otherwise.

There's something almost insane about all of this, including the bizarre tales that have followed the first one, but our national confusion hardly ends with the struggle to whomp President Donald Trump's nominee for justice of the Supreme Court. For another matter of consequence and similar illogic, the progressive hope is that Democrats will win the House and Senate in the midterm elections and thwart the worst of Trump; that would more likely mean thwarting the best of him and aiding the worst.

Consider that a truly shiny moment for Trump and his Republican cohorts was passage of tax reform legislation taking a sluggish economy and inspiriting it with life, liberty and a better chance for millions to pursue happiness.

We've had some of the lowest unemployment rates ever, a situation in which a stroll down Main Street shows as many "We're hiring" signs as invitations to come in and buy. Stagnant wages? Up-and-at-'em. Manufacturing, said by the Obama administration to have run out of human needs, is looking hard for skilled hands. Consumers are confident, small business are confident, family incomes are up, and the Democrats have had enough.

They said President Barack Obama did this invigorating thing and that the tax breaks were just for the rich. But while the Obama plan had its pluses, the economy grew despite him, not because of him, and even then very slowly. The thing about tax cuts is not whether they might benefit some with fat wallets, but whether they are for the overall good of the society, and they were. And if you really want unemployment lines circling around the block, go back to some of the highest corporate taxes in the world.

The Democrats, who could change things as midterm victors with shut-down-the-government budget games, are more and more socialists these days. They don't get it that, without adjustments, Social Security, Medicare and Medicaid will be consuming all federal revenue in not so many years. What they want is more money spent on all of these â€“ in fact, Medicare for everyone â€“ along with guaranteed jobs, free college, forgiving student loans, paid family leave and redone infrastructure.


What you are talking about is tens of trillions of extra spending over the next decade and you won't get there with taxes that would only achieve equality of destitution.

The debt would kill us and Trump might not mind so much since he is already reluctant to do much about it or to touch Social Security. He is right to want to restructure infrastructure, but it ought to be done with public-private partnerships while killing other programs to pay for it. Meantime, Trump is working on another way to destroy the economy â€“ his tariffs that are already raising prices, reducing exports and costing jobs, and, on this issue, many Democrats are with him, especially gung ho to get China to play fair.

Democrats have long been protectionist for the sake of union support and don't care that ratification of the Trans-Pacific Partnership would unite lots of Asia in ways that could effectively constrain China, especially with help from Europe. Overall, the American people would be better off with this trade deal, but, look, there are votes and there's the national good and we know what comes in second.

From the start of Trump's presidency to the court clash today, there has been an effort to outdo him in outrages. A major effort has been to depose him even if that requires the demolition of our beloved system, as in the FBI turning against its principles. Here's a means as bad as a Russian collusion.