Once The Floodwaters Recede, Will Trump Have Seized The Political High Ground? 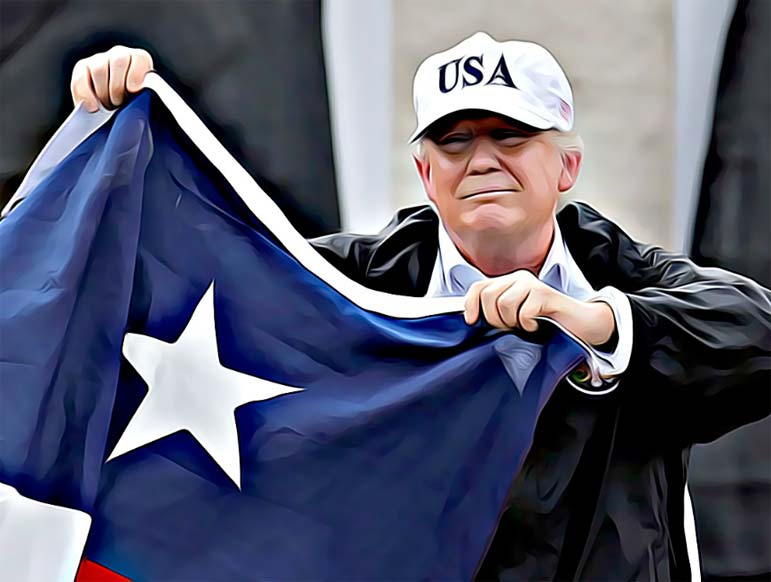 Rahm Emanuel is famous for two things (well, three if you include the time he mailed a dead fish to a political foe).

One would be trying to run the city of Chicago, which may or may not be possible.

The other is this quote: "You never let a serious crisis go to waste. And what I mean by that: it's an opportunity to do things you think you could not do before."

That passage comes to mind watching President Trump's stops in Texas and Missouri. Amidst a terrible tragedy, there's opportunity for this president. Will he seize the moment?

For Trump, here's a chance to talk about infrastructure, as he could not before. And, in doing so, to coax reluctant Democrats into a promise of bipartisanship - reluctant though it may be.

My two pieces of advice for this administration:

First, the next time President Trump returns to Texas (would the White House gamble on a first pitch at an Astros playoff game or a coin-toss at a Texans' regular-season game?), bring along Nancy Pelosi, Chuck Schumer and a few of their friends. Give them a firsthand tour of the Texas devastation. Lead them in a pledge to make infrastructure a bipartisan urgency for the current Congress.

And if Pelosi and Schumer decide to poison the well by bringing up such familiar Democratic chestnuts as construction wages, labor protection and the Davis-Bacon Act? Congratulations, Mr. President, they walked into your trap.

I wouldn't limit the bipartisan moment and the goodwill tour to Texas, by the way. Some of the states most in need of infrastructural work just happen to have been in the Trump last November. That would include the five states - Iowa, Pennsylvania, Oklahoma, Missouri and Nebraska - that place worst on this study of the nation's structurally deficient bridges.

The numbers are staggering. In Pennsylvania, one-fifth of the state's nearly 23,000 bridges are classified as structurally deficient. In Philadelphia, the scene of last year's Democratic National Convention, pipes average 78 years of age - some dating back to when Andrew Jackson was on the ballot, not a $20 bill.

Elsewhere along an Upper Midwest that flipped from blue to red last year: 11% of Michigan bridges are classified as structurally deficient. In Wisconsin, the figure is closer to one in eleven.

Perhaps the Democrats' congressional leadership would decide not to take part in the presidential road show. If so, Trump still has the political upper hand: he can convey to town-hall audiences that he reached out; he's trying to move the ball in Washington.

The other opportunity now on the table, which is indirectly related to bipartisanship: a hard push for tax reform in Trump states where an incumbent Democratic senator faces re-election next year.

Ten Democratic senators are in this bind - five in states carried by both Trump in 2016 and Mitt Romney in 2012 (by comparison, only one of the eight Republican senators up for reelection in 2018 - Nevada's Dean Heller - is campaigning in a state won by Hillary Clinton last fall).

Missouri is a case in point - and a big reason why Trump stopped by: to lay the groundwork for tax overhaul.

It's no accident that Trump ended up in Springfield. The town is home to Harry Truman, in the 1948 presidential election a basher of a "do-nothing" Republican Congress.

But Missouri's also home to Claire McCaskill, one of the aforementioned 2018 red-state Democrats.

If the White House's unstated goal is to reach 60 votes on tax reform so as to avoid a Democratic filibuster, then Senate math dictates 8 of the 10 red-state Democrats crossing the aisle (this assumes all 52 GOP senators stay on board.

One of those crossovers might be McCaskill - because she too is looking at the math.

It's a pattern that holds in other Trump states.

For Donnelly, the question is how to finesse that 275,000-vote difference between his win and Trump's. So perhaps it's not a surprise that he was one of three Democrats - Heitkamp and West Virginia's Joe Manchin the others - to break with their party and vote to confirm Neil Gorsuch's Supreme Court appointment.

Should Trump continue to work the red-state circuit for tax reform and other agenda items, it speaks to another political reality: the Senate is kinder than the House when it comes to initial midterm tests for elected presidents.

Otherwise, the incumbent's party has taken a beating in the lower chamber: in those seven midterms, an average loss of almost 26 seats (precisely the number Ronald Reagan dropped in 1982).

With 25 Democratic and only 8 Republican senators up for a vote in 2018, there's safety in numbers for this White House. And given the large numbers of Democrats who fear their political safety: an opening to push the Trump agenda.

If this White House seizes the higher ground.