More nuclear talks with North Korea would be pointless 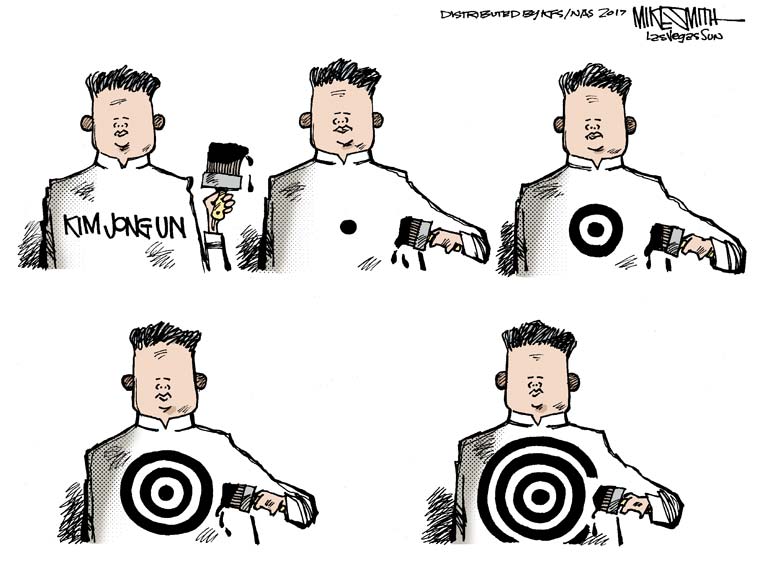 The notion that the current standoff between North Korea and the U.S. and its allies should end in another round of six-party talks recalls the old joke about the definition of insanity: doing the same thing over and over and expecting different results.

Remember North Korea has violated every agreement it has ever made with the international community. From the Nuclear Nonproliferation Treaty to the 1994 Joint Framework Agreement, the Hermit Kingdom does not keep its word. And

yet it seems like this is the direction America is headed. Kim Jong Un's ballistic tantrum in recent weeks seems likely to have the same outcome as his father's past fits. He threatens to incinerate Guam. He keeps testing missiles.

Trump correctly stated that more words will not be sufficient. But his administration is already backpedaling. Secretary of Defense James Mattis Wednesday told a pool reporter: "We're never out of diplomatic solutions. We always look for more. We're never complacent."

That's vague enough to leave the door open to something better than another round of summitry. But it doesn't look good. Already many nonproliferation experts are chiming in with shopworn policy recommendations to combine carrots and sticks with the aim of negotiating another agreement. It's quite possible that Trump's tweet will have the same staying power as his promise to release his tax returns.

Fortunately for Trump, he has other options. To start, he should take a sensible approach to North Korean diplomacy and abandon the fantasy that more talks will persuade the Kim regime to abandon its nuclear weapons. Instead, Trump should engage in what American Enterprise Institute scholar Nicholas Eberstadt has called "threat reduction."

This does not mean abandoning diplomacy altogether. It would be useful to have a military hotline with the North Koreans to avoid catastrophic miscalculations.

But the U.S. must prepare for more aggression from Pyongyang. In overlooked congressional testimony from January, Eberstadt recommends a policy of bolstering missile defense systems for South Korea, Japan and the U.S. and encouraging South Korea to bolster its civilian defense capabilities. Eberstadt also recommends doubling down on counter-proliferation, interdicting North Korean ships on the high seas, targeting its illicit procurement network, and other steps past administrations have taken to make it harder for the regime to perfect its missiles and nuclear weapons.

I would add to this list: covert operations aimed at sabotaging these programs similar to the Stuxnet virus deployed against Iran's centrifuges in 2009 and 2010.

Eberstadt also warns that it's important to understand that North Korea's nuclear program is not just an insurance policy for the survival of the regime, as most experts understand it. He says nuclear weapons are also a component of the country's strategy to break the U.S. alliance with South Korea. He points out that unification of the peninsula has been a consistent aim of the Kim family since the start of the Korean War. They have shown no sign of giving this up. This means the U.S. must plan now for a response to a conventional military attack on South Korea.

Trump should also aim to delegitimize North Korea. This is distinct from isolating the regime, which is a mantra every president has said for the last 25 years. North Korea is already isolated. As I wrote recently, it's important to continue to support quiet programs to break the information seal the regime tries to impose on its citizens. Ebertsadt elegantly put this principal as follows: "The regime is deadly afraid of what it terms 'ideological and cultural poisoning,' what we could call foreign media, international information, cultural exchanges, and the like. We should be saying, bring on the 'poisoning'! The more external contact with that enslaved population, the better."

For now this means continuing to support efforts of North Korean defectors to get portable DVD players loaded up with South Korean television programs over the demilitarized zone through smuggling, drones and other means.

Another component of delegitimizing North Korea should be to awaken South Korean civil society to their responsibility to begin planning for how it will one day have to absorb a population that has lived under a Stalinist tyranny for nearly 70 years.

Greg Scarlatoiu, the executive director Committee for Human Rights in North Korea, has also recommended for the U.S. to push for suspending North Korea's voting rights at the United Nations. This is a long shot because China to this day has acted most of the time as North Korea's protector at Turtle Bay. But the message it sends is important. North Korea is not part of the community of nations; it's a criminal syndicate masquerading as a government.

Many experts have suggested another component should be getting tough with China, North Korea's benefactor and supplier of fuel and electricity. But even Trump has acknowledged that his initial effort to work with Beijing in this regard has so far failed.

It's possible that ratcheting up pressure could get better results. But it's also a risky strategy because it could spark a trade war or prompt China to become more aggressive in other areas such as the South China Sea, where it continues to build artificial islands as a military foothold.

For now the most important thing for Trump to do is to prepare for the worst, mitigate the North Korean military threat and lay the groundwork for the day when Koreans can liberate themselves. The one thing he shouldn't do is apply sanctions today in the hopes of negotiating at some point in the future. As Trump tweeted, that's what the U.S. has been doing for the last quarter-century. Let's hope he sticks to his guns this time and avoids the same mistake as predecessors.