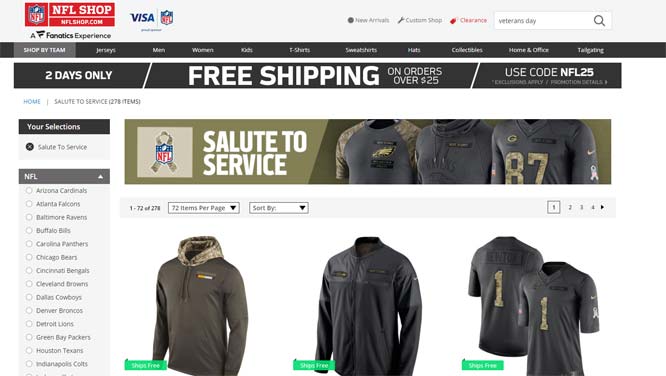 Go to NFLshop.com -- the online store for the -- type the words "" into the search box, and you'll find a nice jacket to honor veterans.

It's only $78.99 and commemorates , the national holiday in November established to honor all military veterans.

"Men's to Service Hybrid Performance Jacket" is how the one I looked at is described, although similar jackets are available with the logos of all the NFL teams.

But there's something every culture warrior in the Virtue Signaling Bowl should know about the league's "Salute to Service" jacket:

So if you wish to kneel, say, like some real NFL player during the national anthem on and pretend you're actually respecting the flag, the anthem and veterans, then I can't really help you. You're on your own.

But then, aren't we all with this one?

The argument over kneeling during the anthem at NFL games has jumped to the . Two police officers, both , made news for being photographed in uniform, kneeling in support of protests against police brutality.

Democratic Mayor didn't want to touch it. He has troubles of his own with black voters, having sat on that video of a white police officer shooting a black teenager to death until after his re-election was secure.

Police are prohibited from engaging in political activity in uniform. But the mayor declined to engage about the cops on their knees.

Betwixt? I've never heard a politician use "betwixt" before.

Remember that conservatives didn't push this NFL protest drama. The left pushed it for years.

In and , black NFL players raised their hands on the field, in the "Hands Up, Don't Shoot" pose in support of slain , police shooting victim , who turned out to be a dangerous thug, not some hero.

Later came another try, this with point man and mediocre quarterback -- wearing warm-up socks with pink pigs as police officers on them -- first sitting, then kneeling through the anthem to protest police brutality.

What did the political left want? It wanted a revolt of the gladiators on national television. And it got what it wanted.

Fans became angry, and many began turning off the game because of the protests, and ratings dropped.

And then the other day, President , in a fit of ego, as if he were some drunk at the end of the bar watching a game, not the leader of the free world, blew his oxygen all over the embers, saying he hoped NFL owners would fire any "son of a bitch" kneeling during the anthem.

It caught fire. And here we are.

So if you stand for the anthem now, you may be accused of racism, or being indifferent to police brutality. And if you kneel, then others will say that you're disrespecting the anthem and the flag.

Some creative minds have explained that we truly display our patriotism by kneeling during the anthem.

I respectfully beg to differ. Kneeling is about public defiance and disrespect. And I don't think it's right.

I'm not a veteran, but I am an American, the son of immigrants, and I desperately wanted to become American as a boy.

I played American sports. And I learned to stand straight, hand over heart, facing the flag, when the national anthem is played.

It doesn't hurt. Really, it doesn't.

Are there other appropriate ways for NFL players to protest police brutality beside kneeling during the anthem at games? Because virtue-signaling is just a little too easy.

I've just come up with two: Players could take pregame buses to police districts, including those districts where record numbers of black kids are shot down night after night in the street gang wars.

And there, with photographers ready, the players could kneel. I don't think any big-city Democratic mayor would stop them. mayor would find himself betwixt aspirations, but he wouldn't stop them.

Or players might use their NFL clout to actually sit down with cops -- and white and Latinos, women and men -- and talk to them about what's really out there.

After Trump issued his challenge, some of the billionaire owners stood with their players on the sidelines, linking arms in solidarity. One was of the .

"I'm not a crusader, but this was a moment for the ," Khan was quoted as saying. "I do not plan any future sideline appearances."

As much as the left would like for us to believe it, America isn't the Jim Crow South of the 1950s and '60s. Are there problems? Yes. Does racism still exist? Yes. But even as our gladiators are on their knees, fists raised, like the great African-American Olympic sprinters of my childhood, a time of burning cities and riots and rage, can we please acknowledge something?

This isn't the '60s. Fires aren't burning down whole neighborhoods in or . And America twice elected a black man from as president of .

So are we a perfect country? No. But lest we forget, we are a great one. And all too often, we're encouraged to forget.