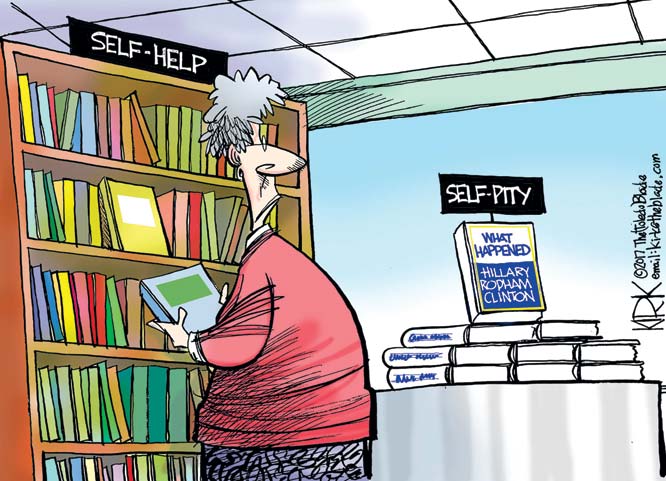 I thought I would avoid having anything to say about Hillary Clinton's latest book.

I thought the book, "What Happened," was meant to be some sort of cathartic Hillary Clinton 3.0 end of the story.

I thought it would be accompanied by a graceful farewell tour.

I forgot: The Clintons don't do graceful, and they certainly don't do farewells.

Instead, Clinton is thrashing around in front of the faithful, having pity parties and making news that has caught the attention of Republicans everywhere.

Incredibly, Clinton herself declares that she is anything but done.

She isn't on a farewell tour or even saying that the election is over.

The Washington Post reports that at a recent Clinton book party/reading, she actually said to former staff and supporters that "none of us can afford to go quietly away. We need our voices, we need our energy. . . . We're not going to go anywhere. We're still fighting and still moving." Presumably this was not accompanied by a laugh track.

She has rejected well-founded concerns about her blocking the rise of new voices within the Democratic Party and about not supporting a new generation of Democratic leadership.

But in fact, in typical self-serving Clinton style, she is taunting the world with the idea that she might contest the 2016 election results.

In an NPR interview this week (of course it was an NPR interview), Clinton said she would not rule out challenging the legitimacy of the 2016 election if "we learn that the Russian interference in the election is even deeper than we know now."

She knows it won't happen, but she is still desperate for applause and willing to pretend that Donald Trump isn't really our legitimate president. It's all rather sad if you think about it.

The Trump campaign/Russian collusion myth is now part of the Hillarysphere belief system. It is becoming to Democrats what the "birther" movement was to Republicans. Some Republicans, including Trump, decided to peddle the notion that former president Barack Obama wasn't born in the United States rather than accept the truth that he was our legitimate president.

They knew it got them airtime and applause with the predictable audiences, and it gave them a form of political street cred with people you'd rather not argue with anyway. Sometimes, on both sides of the aisle, it is easier just to pretend to be as certain as they are.

From "Bush lied, people died" to "he wasn't even born here" to "hands up, don't shoot" to today's "Trump colluded and Russia stole the election," we don't need any more reminding that a lie can linger and serve as a safe place for those who can't deal with reality.

I always say, "In politics it is important to always start from an honest place." Not only is Hillary Clinton not there; she is also actively and selfishly leading the Democrats down a delusional path that is stunting their growth.

Anyway, with the election loss, a current 30 percent favorability rating keeping her from being marketable to a broader audience, and former president Barack Obama now crowding her out of the high-dollar Wall Street speaking circuit, Clinton can't stray too far from her most committed and most bitter supporters.

These people are willing to pay a couple of thousand dollars to be in her presence, their safe space, to escape reality for a little while.

The whole spectacle is contributing to the inability of Democrats to take advantage of Trump's discord and the Republicans' intermural gridlock.

Clinton craves the attention and the money, and she has no interest in walking away from the game, especially while her supporters still seek her confirmation of the Trump resistance.

I guess it's working for everyone, including Republicans.