If Republicans cower and punt on DACA 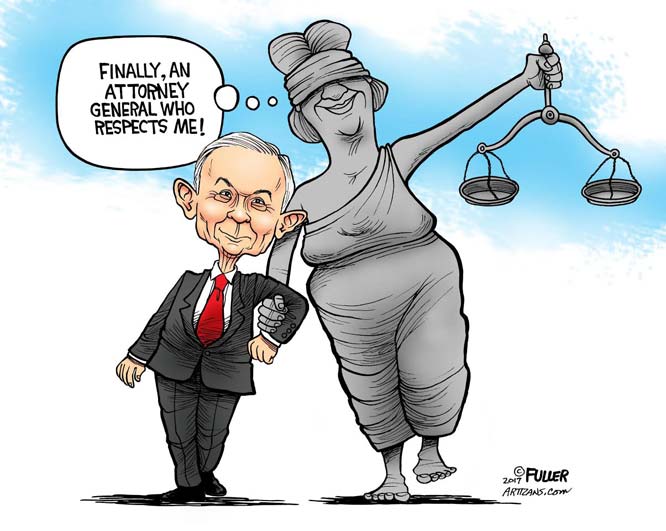 Good for him. We either have laws or we don't. We can't make them up on the fly. Tuesday, Sessions announced that the Trump administration would no longer shield from deportation undocumented immigrants who came to the United States as minors. Deferred Action for Childhood Arrivals, or DACA, he said, "was implemented unilaterally to great controversy and legal concern after Congress rejected legislative proposals to extend similar benefits on numerous occasions to this same group of illegal aliens."

So, the administration has given Congress six months to take action and reflect the will of the people. For his part, Sessions is committed to enforcing the law above all else. Period. Bringing DACA to an end is not an insider legislative tactic. Rather, it is a return to proper law enforcement. And if Congress legislates a provision protecting undocumented immigrants who have mostly known life only in the United States - and President Donald Trump signs the bill - Sessions would be the first person to uphold that law.

Look, I hope Congress steps up and does exactly that. Passing an exception for those who came here illegally at a young age seems like it would be the fair thing to do.

And to that point, I think Laura Ingraham speaks with a lot of clarity on DACA. Her commentary usually runs a tad hot for me, but Ingraham was spot on during "Fox & Friends" Tuesday morning when she said, "We don't rule by emotion, we rule by law." If we are going to protect certain immigrants from what many have described as unfair deportations, we will first have to get a law on the books that does exactly that.

Oh and by the way, let's not forget that DACA is the Deferred Action for Childhood Arrivals program. Just as President Barack Obama deferred action on North Korea and Afghanistan, Trump and his team now have to deal with the consequences of the previous administration's deferrals.

So, while Hollywood elites, Silicon Valley tech giants, Wall Street billionaires and the political establishment everywhere pose and swoon over DACA, just remember that the attorney general is upholding the law. If they don't like it, they should call their member of Congress.

To this day, no one knows the full consequences of the resulting human wave of young people that appeared on our border when Obama gave the all-clear.

Andrew C. McCarthy wrote in National Review this morning that Obama's "maneuvers violated core constitutional principles: separation of powers and the president's duty to execute the laws faithfully. There has never been a shred of honesty in the politics of DACA."

And now our democratic system must deal with the problem.

It is a little harsh, but if the shoe fits and the GOP passes the buck on DACA, Republicans will have to call out our elected members in Congress for failing to take charge.

Again, to quote McCarthy: "As for the Republican establishment, DACA is just another Obamacare: something that they were stridently against as long as their objections were futile, but that they never sincerely opposed and - now that they are accountable - cannot bring themselves to fight."

So, Republicans now face a test. Sessions is upholding the law. If Republicans cower and punt, we will get what we deserve at the ballot box.