That burning smell of patriotism 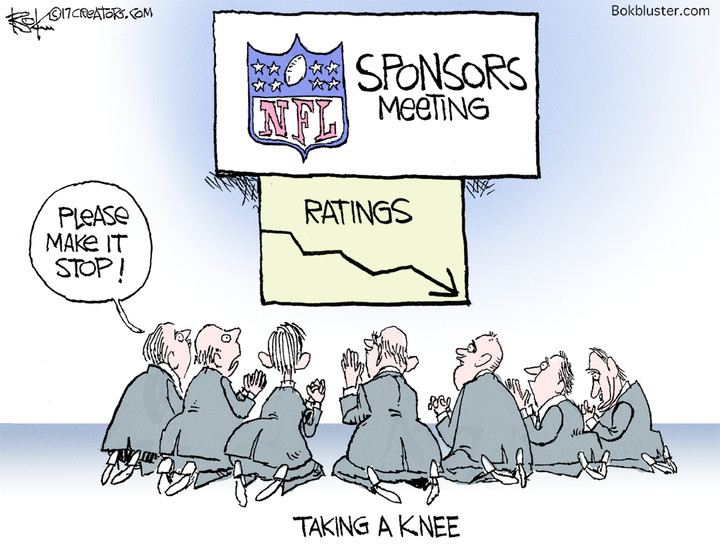 The national media remain obsessed over President Trump's tweets, especially when they can be interpreted as racially inflammatory. Liberal sports journalists spent the summer hoping and wondering when the original national anthem kneeler, Colin Kaepernick, was going to get another quarterback job in the NFL. It never happened, so some (predictably) saw Racist America at work, punishing Kaepernick for his courageous stance (or kneel).

President Trump apparently lost patience with this nonsense and tweeted: "If a player wants the privilege of making millions of dollars in the NFL, or other leagues, he or she should not be allowed to disrespect ... our Great American Flag (or Country) and should stand for the National Anthem. If not, you're fired. Find something else to do!"

Ka-boom. The left heard echoes of racism and censorship, as well as flag-waving patriotism, actions they always find distasteful and exploitative. The media leapt all over the controversy, which spurred cowardly NFL teams to make even stauncher displays of contempt for the flag. So they knelt, or arrogantly sat, or showboated by not coming out at all.

Fans everywhere responded by burning their jerseys in disgust.

This is nothing but counterproductive for the NFL. Showy protests during the national anthem dishonor the military and insult this country and all who live here. NFL commissioner Roger Goodell, who would have disciplined Kaepernick for wearing green cleats, punted, as did the owners. The NFL wouldn't even let Dallas add a helmet sticker to honor police officers after five were shot dead at a Black Lives Matter protest.

Kaepernick started this fight, insisting, "I am not going to stand up to show pride in a flag for a country that oppresses black people and people of color." He was oppressed to the tune of $39 million over the last three years of his career. Millions of his supposed oppressors were not.

But the media made it sound like Trump started this feud. "Insulter in chief," announced ABC's Martha Raddatz on "This Week." Trump was "attacking freedom of speech and star athletes." Raddatz cited a new ABC News/Washington Post poll showing "66 percent of all Americans, including nearly 4 in 10 conservatives think Trump has done more to divide the country than unite it. Instead of bringing the country together, he has proved to be a provocateur."

Black Lives Matter rioters and their athletic supporters are somehow never the provocateurs. Tactics like burning down buildings and throwing rocks and urine-filled bottles at the police aren't questioned. They're dismissed with journalistic weasel words like "the protests were largely peaceful."

President Obama was presumed to be a uniter, which is to say the media projected him as one. The polls said he wasn't. Three years ago, the same ABC News/Washington Post poll found 55 percent found Obama to be divisive, and 38 percent disagreed. ABC News buried that poll in a dumpster.

Instead they spun. They always spin for Obama. Washington Post political reporter Aaron Blake made excuses for the first black president: "Of course, saying Obama is divisive isn't quite the same as blaming him for failing to unite the country. Some might see Obama as divisive just by the nature of who he is and/or think he didn't stand much of a chance to unite a very polarized country."

The liberal media are shameless hypocrites when they polarize the country and then complain the country is polarized. They have honored Kaepernick as some kind of "star-spangled" patriot and pushed his radical racial agenda. They have pressured the NFL and every other televised sports league to take liberal stands on everything from race to gun control to imposing transgender bathrooms.

And when those leagues inevitably see their ratings drop, the media will try to claim this loss of popularity has nothing to do with politics ... just as they do about their own ever-declining "news" ratings.