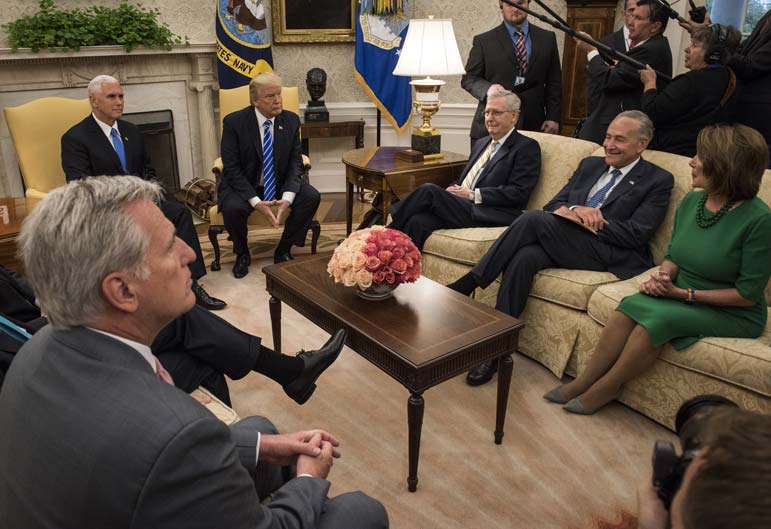 Early Wednesday afternoon, Trump inexplicably cut a deal on a short-term debt-ceiling increase with Democratic leaders, despite House Speaker Paul Ryan, R-Wis., and GOP leaders having denounced the idea. Then he took off for an event in North Dakota, where he effectively stuck their nose in it: "We walked out of there - Mitch [McConnell] and Paul and everybody, Kevin [McCarthy] - and we walked out and everybody was happy," Trump insisted.

Then, to top it all off, he invited Democratic Sen. Heidi Heitkamp of North Dakota - a top GOP target in 2018 - on stage and praised her as a "good woman."

This is all hugely counterproductive for the Republican Party and has to have GOP leaders privately fuming. And it comes on the heels of Trump directly attacking Ryan and Senate Majority Leader Mitch McConnell, R-Ky., and tangling with the two most vulnerable GOP senators up for reelection in 2018, Sens. Jeff Flake, R-Ariz., and Dean Heller, R-Nev.

It's no secret that Trump has never really had the interests of the Republican Party at heart. His party affiliation has always been subject to change, and he has never played ball with the GOP powers that be. He has instead forced them to bend to his will in the name of keeping the peace and not inflaming his passionate base of support.

Those GOP leaders have also wagered that, whatever headaches came with embracing Trump, they would at least have a Republican president to enact conservative policies.


But it's beginning to get ridiculous for GOP leaders. That bargain they struck with Trump was always a tenuous and uneasy one, and he's now openly violating it. What's more, he's repeatedly and publicly undermining GOP efforts to grow their Senate majority - you know, the one he insists isn't big enough so he needs to nuke the filibuster - in multiple 2018 races.

GOP leaders' response to all of this, of course, is likely to be muted. They've lived through Trump controversies before, and they've always assumed it would blow over. They'll assume this debt-ceiling fiasco was just Trump Being Trump and hope it doesn't happen again. And arguably more than that, they've reasoned that they can't attack him, because it would tear the party in two and/or he would win.

But they need to ask themselves what happens when they stop being useful to Trump, and Wednesday was a preview of that. What if it's not the leaders who finally cut bait on Trump, but Trump who cuts bait on them? On Wednesday, he might as well have called himself an independent. Or even a Democrat.