Irma reminds us of our limits 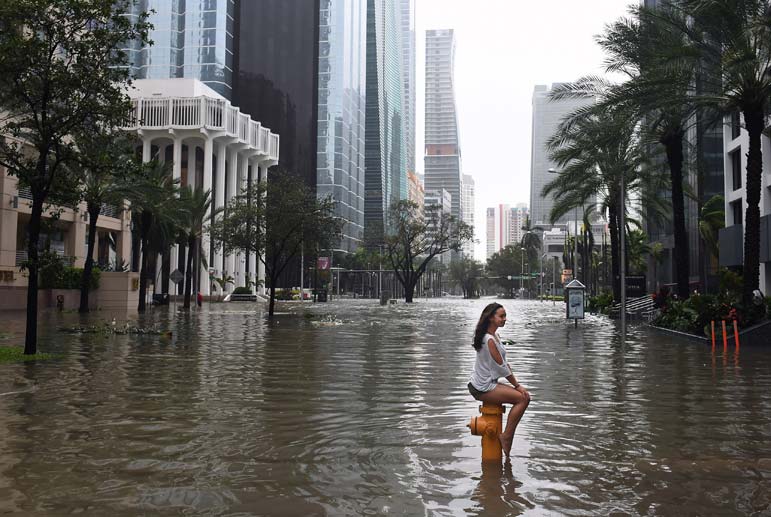 On Sept. 8, 1900, a hurricane drove 15 feet of storm surge over the thriving city of Galveston, Tex., maximum elevation 8.7 feet. At least 6,000 people were killed in what remains the deadliest natural disaster in U.S. history. Most of them had less than a day's warning that a storm was approaching and had no inkling of its power.

I thought of that when I read a report by The Associated Press as a storm of similar intensity rolled over the coast of Cuba and headed toward Florida.

The AP quoted a businessman from St. Petersburg, Florida, who was irritated that Hurricane Irma was headed toward his town and not toward Miami as predicted.

"For five days, we were told it was going to be on the east coast, and then 24 hours before it hits, we're now told it's coming up the west coast," the man complained. "As usual, the weatherman, I don't know why they're paid."

Arguably, they're paid for the thousands of lives they may have saved by sounding warnings that the people of Galveston never received. Thanks to radar and satellites and weather planes and forecasting supercomputers - to name only a few of the advances of the past century - the world watched for days as Irma whirled steadily westward across the Atlantic Ocean, a slow- otion bowling ball headed for the pins. The speed of its winds, the spread of its bands, the pressure in its eye were tracked like vitals in an intensive care unit.

But I don't imagine the grumpy businessman was alone in his exasperation.

Our growing knowledge of the world has given us more of everything - except happiness. As 21st-century heirs to the Enlightenment, we know an awful lot. We know how to edit a gene. We know how to convert millions of simultaneous messages - conversations, texts, memes, movies - into packets of ones and zeros and speed them from tower to tower to another person's hand. We know how to convert the energy of sunlight into a ride in the car.

Yet we still don't know everything. In the case of Irma, meteorologists and their computers could read the air currents across a hemisphere and forecast the storm's eventual collision with an air mass that would push it sharply to the north.

What they could not predict five days in advance, the hole in their knowledge, was the precise spot above Earth where the collision would occur.

In medicine, speaking generally, our knowledge is more advanced and useful in diagnosing illness than in curing it.

In communications, we've raced ahead in our ability to make connections while we've lagged in the struggle to make good use of them.

In politics, we've become more adept at driving factions apart while gaining little in our aptitude for bringing them together.

Ancient humans had a dismally scant knowledge of the workings of creation. The power to foretell the arrival of a storm would have been supernatural to them - much less the ability to repair a living heart or to put moving images of tiny people inside a box.

But they were precocious in this regard: One creation story after another foretold the persistent fact of modern life that knowledge is imperfect and often unsettling.

In the Hebrew Bible, for example, the forbidden fruit grows on the Tree of Knowledge - in this case, knowledge of good and evil. That knowledge, according to John Milton, "brought Death into the World, and all our woe."

I'm not saying, nor was Milton, that ignorance is bliss. The doomed residents of Galveston mutely attest to the value of knowing more rather than less.

But across the Caribbean, throughout Florida, in sodden Houston and shaken Mexico and elsewhere in this world of death and woe, nature is reminding us of all we have yet to learn - and all that is beyond our paltry control.