Which candidate will keep us safer from the jihadists? 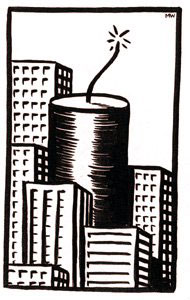 The terrorist bombings in New York and New Jersey, which injured 29, and the terrorist stabbings in Minnesota, which injured nine, were nowhere near as serious as the terrorist shootings in Orlando, which killed 49, and in San Bernardino, which killed 14. Nevertheless, the acts of accused bomber Ahmad Khan Rahami, and of Dahir Adan, the stabber whose rampage was ended by an off-duty police officer in Minnesota, brought the issue of terrorism back to the presidential campaign trail.

There was a time when terror attacks were thought to benefit Trump politically, because polls suggested he was seen by many voters as tougher on the issue. But Trump is widely believed to have fumbled things badly after Orlando last June, forfeiting some of his advantage. New York, New Jersey and Minnesota presented an unhappy opportunity to do better.

For Clinton, the attacks were a chance to lead, to show strength and steadiness after a tough few weeks.

Clinton played it safe. Speaking to reporters in White Plains, New York, before setting off to a speech at Temple University Monday, she thanked first responders and in essence promised to continue the Obama administration's anti-terror efforts, only a bit better. She would start an "intelligence surge," she said, and an "accelerated" anti-Islamic State coalition air campaign -- all a little more of what Obama is doing.

After two acts of jihad committed by immigrants apparently committed to Islamic radicalism, Clinton, as always, rejected Trump's immigration-oriented anti-terror proposals. "Let us remember, there are millions and millions of naturalized citizens in America from all over the world," she said in White Plains. "There are millions of law-abiding peaceful Muslim-Americans. This is the kind of challenge that law enforcement can be and is prepared to address, namely going after anyone who would threaten the United States."

The overarching theme of Clinton's message at the news conference was continuity with the Obama administration. "I was part of the national security team that worked with President Obama to develop strategies to fight the terrorists," she said. "So we're going to stay focused on what will work ..."

Clinton did not address the possibility that what is being done now is not working.

In any event, that was it for Clinton's public statements on the issue. When Clinton arrived at Temple, for a planned speech to millennials, she began with a few seconds of thanks to first responders, but then continued with the speech as planned. It covered climate change and LGBT rights, but said nothing about national security.

Trump, for his part, was as bold as Clinton was cautious. "These attacks and many others were made possible because of our extremely open immigration system, which fails to properly vet and screen the individuals and families coming into our country," he said. "Attack after attack, from 9/11 to San Bernardino, we have seen how failures to screen who is entering the United States puts all of our citizens, everyone in this room, at danger. So let me state very, very clearly: Immigration security is national security."

Trump noted that in the past decade and a half, "hundreds of immigrants and their children from high-risk regions have been implicated in terrorism and terrorist-related activity in the United States." And Clinton, Trump continued, would substantially increase the number of refugees from high-risk areas being allowed into the U.S. Clinton also opposes ideologically vetting those entering the country, as Trump proposes to do.

"Hillary Clinton refuses to consider an applicant's world view, and thus, their likelihood of being recruited into the terror cause at some later date, which is going to happen in many, many cases," Trump said.

Trump covered other aspects of the fight against terrorism in conventional terms -- "working in partnership with our allies on a military campaign to utterly destroy ISIS." But the heart of his speech was immigration and a bold intention, if not a detailed plan, to attack the problem of imported terrorism.

Trump is known for sharp attacks on his opponents, and in Florida he again accused former Secretary of State Clinton of creating the conditions that led to the rise of the Islamic State. But when it came to attacks, Clinton might have outdone her opponent. "Donald Trump is being used as a recruiting sergeant for the terrorists," Clinton said in White Plains. "The kinds of rhetoric and language that Mr. Trump has used is giving aid and comfort to our adversaries."

Who won the safe vs. bold terror debate in the wake of New York, New Jersey and Minnesota? That's the kind of question that can't be answered on a day-to-day basis, and in any event could well change by next week's debate. But some Republicans felt Trump walked away with a real edge.

"This type of terror, which affects or could impact anyone in the country, makes the Clinton and the Obama administration response and their plans to deal with ISIS seem woefully weak, and makes real voters feel much less safe," the veteran Republican strategist Dave Carney, who is not working on the presidential campaign, wrote in an email exchange. "Trump will reap a huge advantage: Policy CYA speak v. Tough action & concrete steps to make us safer. Trump won this weekend hands down."

"Trump looked strong, while Clinton looked measured and weak," wrote Curt Anderson, another veteran GOP operative not working on the campaign. "Also -- we overestimate the impact of what the candidates say in the wake of these things. The big issue is that any terror attack is terrible for Clinton. It highlights her biggest weakness. Anybody remember when Hillary Clinton's strongest asset was her command of foreign policy and experience with it? Seems like a long time ago."