As The Election Passes Labor Day, A Question Of Whether Hillary Intends To Labor Any Harder 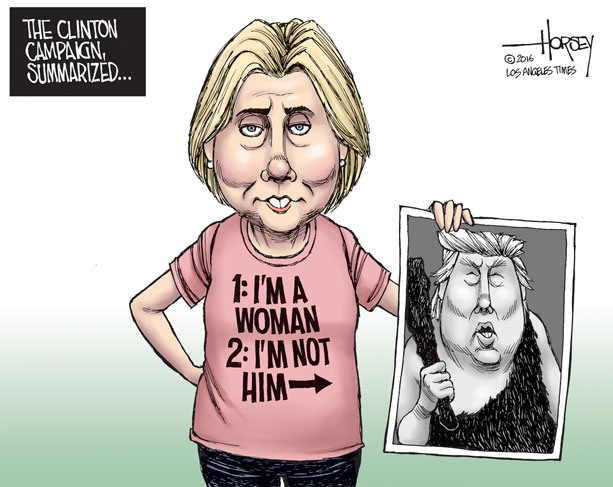 As we examine the state of the presidential race heading into Labor Day, it's hard to ignore the impression that Hillary Clinton's campaign seems to be . . . well, laboring.

It's not that Mrs. Clinton is in a position to lose to Donald Trump - that is, if the election were held this Tuesday.

Or so the empirical evidence suggests.

The latest CBS News Battleground Tracker has her ahead in North Carolina and Pennsylvania. Without at least one of those two states (respectively, 15 and 20 electoral votes), Trump doesn't stand a chance.

But look inside the poll and you see why the Clinton candidacy has some Democrats reaching for the Zantac:

In short, Hillary Clinton may lead where it counts, but she's not liked. And that fuels a sense that the candidate and the campaign aren't firing on all cylinders in terms of preaching to the skeptics.

With 65 days to go until Election Day, here are three things that would concern me, if I were rooting for Mrs. Clinton.

A Lack of Initiative. You can look at this election as a question of who seizes the high ground for the next nine weeks. And within that, who's "winning" each day in terms of driving the coverage.

Of late, that's been Trump. His trip to Mexico was a roll of the dice that worked out, if the goal was come across as more statesman-like. He speech in Detroit sparked a debate over Republican outreach to minority communities. That's a departure from his primary diet of insults and brickbats.

And the Clinton messaging?

Let's set aside her nine-month lack of press interaction - do voters really care all that much when the media talk about the media? Besides, beginning this week the Clinton campaign and its press entourage will be travelling on the same plane. There should be a thaw in the relations.

Of greater concern to me, if I were "with her": a question of frivolity.

Last week, for example, I received an email steering me to Michelle Kwan's "top picks" in the Hillary swag shop (for those of you with short memories, Ms. Kwan is a two-time Olympics skating medalist).

At this point in the election, the campaign should be e-blasting Americans on the virtues of her economic ad national security platforms, not Thakoon bandanas and Tory Burch tees.

A Lack of History. Race was at the heart of the 2008 presidential race - in a positive way, with the exception of Rev. Jeremiah Wright, as America mulled the groundbreaking choice of an African-American to lead the nation.


Curiously, this should be a gender election. And yet, despite the prospect of Hillary Clinton as America's first female president, it doesn't feel that way.

Part of the reason could be the campaign. The historical overtones were impossible to ignore back in July at the nominating convention in Philadelphia - rightly so.

But since the convention, name the prominent events in which Clinton has played up the chromosomal significance of the moment?

Maybe that changes over the next nine weeks - if the Clinton campaign concludes that one key to winning the election is driving home to the point that a Hillary win is an aspirational moment to those women motivate by glass-ceiling politics.

However, that leads a question as to the uniformity of the candidate's gender appeal.

But a state-by-state age breakdown tells a different story. Sanders led Clinton by an average of 37 points among women ages 18-29. Hillary got 53% of women ages 30-39. From there, her support grew as the voters' age.

Why such a disconnect with younger women? Maybe it's the nature of the candidate's career path - connections and appointments, as opposed to being an industry pioneer. Or, perhaps the lack of that historical narrative.

Or, maybe it's a third factor.

But an important word as, in the big picture of successful Democratic presidential candidates, it conveys the notion that something different in underfoot - oddly enough, in 16-year increments.

Think JFK leading a new generation to power in 1960. In 1976, Jimmy Carter bringing character to the office. In 1992, Bill Clinton at the vanguard of the Boomers' turn in power. And in 2008, Obama and the possibility of post-racial politics.

Hillary's campaign isn't part of that 16-year, cicadan rhythm. By lashing herself to the mast of the Obama presidency, Clinton may have made a pragmatic decision: as his base of progressives and minorities goes, so too do her chances of winning in November.

But while imitation may be flattering, it's not necessarily pulse quickening. Or, for that matter, all that sincere - unless you happen to believe that Mrs. Clinton was a champion for income inequality, corporate taxation or free college long before other Democrats made those notions popular in her party's circles.

Time for Clinton supporters to panic? No.

But to worry whether her campaign can effectively dial it up several notches?