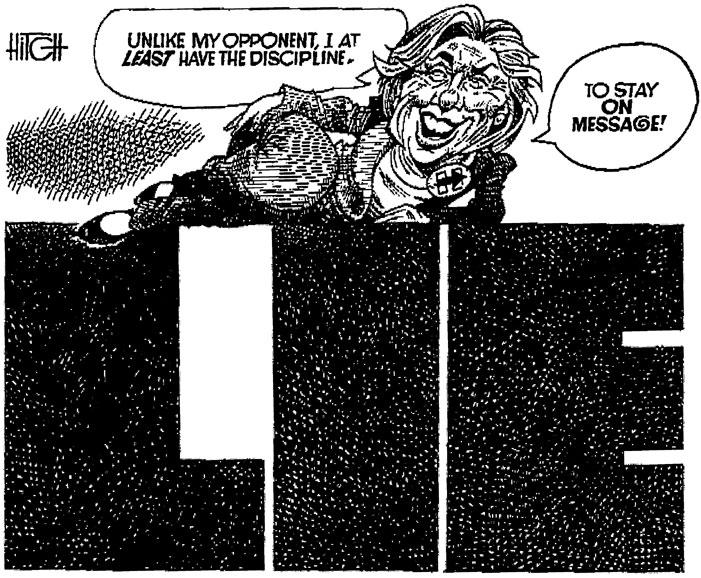 Hillary Clinton tells us she is recovering from a mild case of pneumonia, but less than half of American voters believe her belated explanation of why she appeared to faint leaving a 9/11 commemoration. If she wants to understand why, she can find the answer in a children's poem.

In his 1907 classic, "Matilda Who told Lies, and was Burned to Death," Hilaire Belloc tells the story of a young girl who "told such Dreadful Lies, It made one Gasp and Stretch one's Eyes." One day Matilda calls in a false alarm to London's fire brigade, and as punishment is left home alone while her aunt goes to the theater:

That Night a Fire did break out--

You should have heard Matilda Shout!

You should have heard her Scream and Bawl,

And throw the window up and call

To People passing in the Street . . . but all in vain!

For every time She shouted "Fire!"

They only answered "Little Liar!"

And therefore when her Aunt returned,

Matilda, and the House, were Burned.

Today, it is the American people who have been burned, time and again, by Hillary Clinton's dreadful lies. Let's review just a few examples of her serial dishonesty:

She lied repeatedly about her emails. She lied when she said she had "turned over everything I was obligated to turn over" (FBI Director James Comey said the FBI "discovered several thousand work-related e-mails that were not among the group of 30,000 e-mails returned by Secretary Clinton to state in 2014"). She lied when she said there was "no classified material" in her private emails . . . that there was nothing "classified at the time" . . . and that there was nothing "marked classified" in her private emails - all of which the FBI director said were untrue. And, to top it all off, she lied about her lies - declaring on national television that "Director Comey said my answers were truthful, and what I've said is consistent with what I have told the American people" - a claim The Post's Fact Checker gave "Four Pinocchios."

Clinton lied to the American people about Benghazi. At 10:08 p.m. the night of the attack, she issued a statement that blamed the attack on "inflammatory material posted on the Internet" with no mention of terrorism or al-Qaeda. But an hour later, at 11:12 p.m. she emailed her daughter, Chelsea: "Two of our officers were killed in Benghazi by an Al Queda-like [sic] group." The next day in a phone call with the Egyptian prime minister, Clinton said: "We know the attack in Libya had nothing to do with the film. It was a planned attack, not a protest." Yet two days later, as she welcomed the caskets of the fallen in Dover, Delaware, she blamed that attack on "an awful Internet video that we had nothing to do with."

She lied about a trip she made to Bosnia, claiming that she and her team arrived "under sniper fire," skipped the arrival ceremony and "just ran with our heads down to get into the vehicles to get to our base." In fact, a video shows her being greeted on the tarmac by Bosnian officials and an 8-year-old Muslim girl, Emina Bicakcic, who read a poem in English and told Clinton, "There is peace now."

She lied about her family history. In 2015, she said she could relate to illegal immigrants because "all my grandparents" immigrated to the United States. When BuzzFeed's Andrew Kaczynski pointed out that three of Clinton's four grandparents were born in the United States, a Clinton spokesman said "her grandparents always spoke about the immigrant experience and, as a result she has always thought of them as immigrants."

And her dishonesty stretches back decades. As the late, great William Safire pointed out in a 1996 New York Times column, she delivered a "blizzard of lies" as first lady - about Whitewater, the firing of White House travel aides, her representation of a criminal enterprise known as the Madison S&L and how she made a 10,000 percent profit in 1979 commodity trading simply by studying the Wall Street Journal. Even back then, Safire concluded, Clinton was "a congenital liar."

Today, the American people agree. A recent NBC News poll found that just 11 percent of Americans say Clinton is honest and trustworthy. To put that in perspective, 14 percent of American voters believe in Bigfoot. In other words, more Americans believe that a large, hairy, hominoid creature inhabits the forest of North America than believe that Hillary Clinton tells the truth.

So if Clinton wonders why so many believe she is lying about her health, it is because she has lied so many times, about so many things, that most Americans no longer believe a word she says - even if she's telling the truth.

When she opens her mouth, people look at her like Belloc's Matilda and say, "Little Liar."