What Clinton missed in 'basket of deplorables' 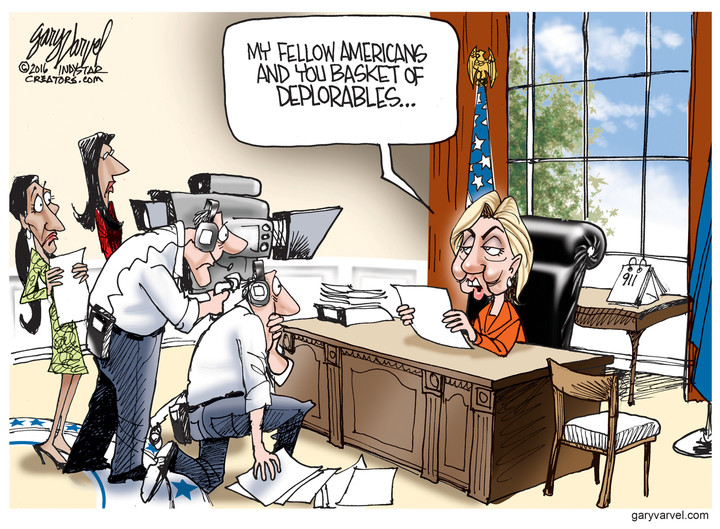 Hillary Clinton made a mistake when she put half of Donald Trump's supporters in a "basket of deplorables." She had already given her big speech on Trump's ties to the alt right. And she had talked before about some of his supporters being "deplorable."

You could even read her remarks as an attempt to persuade liberals to have more sympathy for Trump voters: Some of them, she was saying, were not racists, homophobes and so on, but rather felt let down by their government and stressed by the economy.

(Oddly, the possibility that a significant number of Trump voters might be neither bigots nor economically anxious — that they might just favor Trump because they usually vote Republican — seemed to escape her.)

This time her words became controversial and gave the Trump campaign an opening — because she assigned "half" his supporters to the bad basket. Trump and his running mate, Mike Pence, said that Clinton had slandered millions of Americans.

So her remark was impolitic. Was it mistaken in any deeper sense? That depends on the answer to two questions: How racist, sexist, etc., are Trump's supporters? And how deplorable does that make them?

Sounds pretty ugly. But there are a few things to keep in mind. First: Not all of those polls can be taken at face value. That last one should be interpreted very cautiously. As Tim Carney pointed out, the wording was sufficiently confusing that 10 percent of Sanders supporters, 6 percent of Clinton supporters and 5 percent of blacks chose the pro-slavery answer.

Second: Some of these views may not be rooted in prejudice. The response that blacks are more violent, for example, may just reflect statistics showing that blacks commit more violent crimes in proportion to their population than, say, whites do. This fact doesn't justify suspicion of the vast majority of law-abiding black people. But it may help explain why more than 30 percent of Clinton supporters, too, view blacks as more violent. (How many of Clinton's defenders are willing to say that about a third of her supporters are deplorable, too?) Nor is confusion about Obama's religion per se bigoted, given that the press has had no qualms about calling his "Muslim roots."

Third and most important: You can hold deplorable views without being a deplorable person in general. David Duke is deplorable, even if Mike Pence can't bring himself to say so. But deplorable or misguided views aren't always defining ones. That a Trump supporter, when asked, says blacks are more violent than whites does not necessarily mean that's why he is supporting Trump, or even that racial differences are a topic that he thinks about much at all.

The view that our government is naĂŻve about violent Muslim extremism — a view that a lot of political rhetoric, including some from Clinton, reinforces — could lead someone to answer yes to a pollster's question about banning Muslim immigration. But you might be able to convince some of those people that a ban is a bad idea (as I believe<). You might appeal to the better angels of their nature. If you have written them off as terrible people, on the other hand, you're not going to try.

Bill Clinton understood this point. Racism in the United States has been declining for decades, so we can assume that a large percentage of his voters in 1992 and 1996 — to say nothing of his voters in Arkansas before that — held racial views worse than the ones surveys have shown to prevail among Trump voters. (Check out the trend lines on views about housing discrimination and about interracial marriage.)

Clinton saw that a lot of white voters had some legitimate concerns — about crime and welfare, for example — mixed up with some worse impulses. He spoke up for racial tolerance and addressed the legitimate concerns, and refrained from condemning millions of people for harboring prejudices that he must have deplored.

While progressives these days disapprove of many steps Bill Clinton took in the 1990s, particularly on racially fraught issues, that was the right approach. And his wife was right to clarify and apologize.