Finally! Trump takes the party back to basics 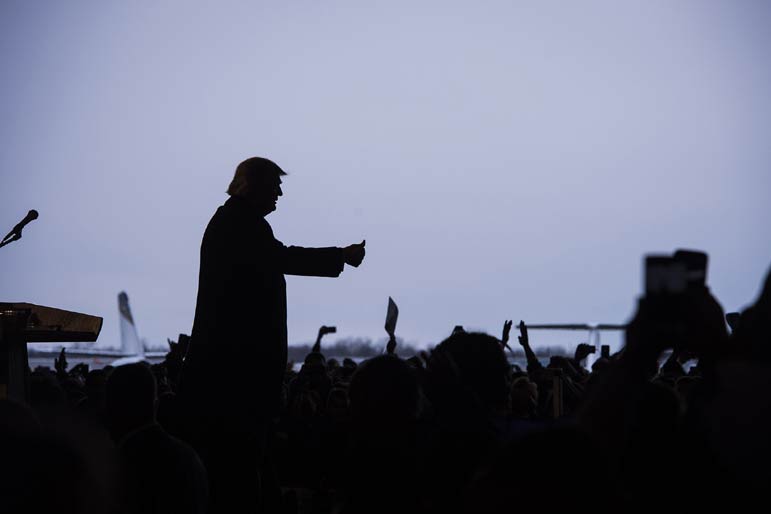 When I first started my op-ed column in 1998, I was a bit of a surprise to the Staten Island community which wasn't used to a female Hispanic conservative journalist. I was invited to be the keynote speaker at the Republican Women's Annual luncheon the following year with many state GOP leaders attending. I was scared to death as this was my first at large public speech and at one point I thought I was having a stroke. I managed to get my point across about how to reach the minority communities and my speech seemed to be appreciated warmly by the politicians attending but nothing changed. When Donald Trump made a trip to Detroit to speak at a black church, I felt like shouting, â€˜Finally! Somebody listened.'

In my speech, I recalled how, growing up in Spanish Harlem, I saw numerous Democrat social clubs throughout the neighborhood but not one Republican. They never campaigned there, they never spoke at rallies and the general consensus among the people was that they were all rich snobs. Yet when I was old enough to vote, I registered as a Republican even though my entire family was Democrat. Why? Because my favorite president was Abraham Lincoln and the more I read about history at that time, I was amazed at how little people know about his opponents and how hard he fought to get the Emancipation Proclamation passed.

Lincoln was a brilliant and very spiritual man and our first Republican president. The party was considered full of radicals who were hell bent on abolishing slavery. D.W. Griffith's silent film, Birth of a Nation was once considered a masterpiece and was shown at the White House and praised by President Woodrow Wilson, a Democrat. Director Griffith was so esteemed in Hollywood that it established a D.W. Griffith award for directors, which to me, confirmed that covert racism has been dominant in Hollywood for decades. President Wilson oversaw unprecedented segregation in federal offices and ignored pleas from civil rights groups to condemn the Jim Crow laws in the South.

Until I saw this silent so-called "masterpiece", I had no idea that it was the Democrats who started the KKK. Birth of a Nation makes these stone cold racists look like defenders of white women threatened by freed blacks.

Although the Republican Party has been at the forefront of civil rights movement, it has been the Democrats who have taken the credit thanks to misleading reporting by a compliant mainstream media. The MSM is predominantly liberal with over 80% registered Democrat or Independent; very few conservative Republicans in high places. They are presently hard at work trashing Donald Trump while failing to do due diligence to Hillary Clinton.

It has been the modus operandi of the liberal press to ignore the racial history of the Democrat Party while demonizing Republicans. The Civil Rights Act of 1964 had more Republicans supporting it than the Democrats. In fact, Al Gore Sr. . voted against the Civil Rights Act of 1964 when he was a Democratic U.S. Senator from Tennessee. Not only did he vote against it, he participated in a 74 day filibuster in an attempt to delay and weaken the legislation.

Remember all that fuss about the Confederate flag flying over the South Carolina capitol? It was put there in 1961 by a Democrat governor over the objection of Republicans and it appears that this flag was put there to show resistance to civil rights legislation proposed by Republicans. It has taken a Republican, Gov. Nikki Haley, to have it removed, hopefully forever.

I had suggested as keynote speaker that Republicans do more to attract the minority voters instead of writing them off. I advised them to hold Town hall meetings and listen to the people in the barrios and ghettos. Explain how their party has policies that will improve their lives and most of all show them that you really care about their lives. Unlike many conservative pundits, I have always lived in or near the inner city and I see the denizens of these areas fall into two categories. I know them well. Some are my good friends.

One group has taken advantage of every benefit thrown at them for their political support. They know how to work the system thoroughly and at times, game it fraudulently. They live in public housing but I see their luxury cars in the parking lots of the supermarkets where they shop with their EBT cards. They pass their techniques of hiding income down to the generations who remain in the ghettos because that is all they know.

The other group struggles to give their children a better life. They work multiple jobs to send them to private, mostly parochial schools because their local public schools are failing. They are religious and most are in stable marriages where the fathers work harder than most for his family. They do not qualify for all the government benefits because these are not meant for the working poor.

Yet benefits are easily doled out to the undocumented and the refugees foisted on us by this administration. This second group is ignored by the elite right and left and it is this group who are listening intently to what Donald Trump is saying.

Can he be trusted? Is he sincere? All I know is that he is doing exactly what I suggested in that speech. He is reaching out directly to those thirsting and pining for the America that once was the beacon of hope to the world. Those who know him know that he has made things happen that skeptics swore he couldn't. He is not a racist and has provided high paying jobs in his businesses to thousands of minorities that have transformed and improved their lives. He has also surrounded himself with excellent conservatives who are not members of the GOP.

For those Republicans who want to learn more about the proud history of the GOP, may I suggest they read Michael Zak's, "Back to Basics for the Republican Party." I have a sneaky suspicion that Mr. Trump already has.