A cautionary tale in the art of film 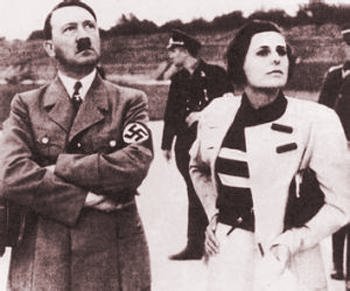 Eighty years ago this week, the National Socialist Party had just wrapped up its hugely successful rally at Nuremberg - the Reichsparteitag des Willens, or Rally of the Will. Unlike previous get-togethers, the 1934 rally produced a hit movie, one that cinÕastes still watch with appalled fascination to this day. Its creator was a brilliant cinematographer and editor who could compose and edit anything - except, in the end, her own life. If only she'd been able to snip one problematic decade out of her 101 years, we'd know Leni Riefenstahl as a game old gal who in her sixties went off to live with an African tribe, in her seventies learned to scuba dive, and at the age of 98 survived a plane crash in the Sudan. There was a documentary made about her a few years back in which she's seen getting off the boat at the end of a day's diving. The captain and her friend Horst walk up the pier ahead of her, lost in conversation. She follows behind, carrying her scuba gear and oxygen tank. She's 92, and it never occurs to either man to give her a hand. They don't think of her as a woman or as a nonagenarian.

If only it weren't for that awkward patch

In the 1930s, Frðulein Riefenstahl put her formidable film-making talents to the cause of the Third Reich, and, after attending the Reichsparteitag des Willens in 1934, produced one of the most remarkable films ever made: Triumph Of The Will.

Go back to that scuba-diving disembarkation scene in Ray M■ller's The Wonderful Horrible Life Of Leni Riefenstahl. In theory, it could all be a setup, and the participants chewed over how best to do it beforehand and did 15 takes: anyone who's worked in documentaries knows how phoney the whole business is. But the point is it seems careless - as if it happened, and the camera happened to be there to record it.

There's no sense of that in any frame of Triumph Of The Will. Granted that audiences were a lot less media savvy in 1934, and granted that a people dumb enough to fall for National Socialism will fall for anything, it's still hard to believe that even in its day anyone accepted what remained Frðulein Riefenstahl's official explanation to the end - that this was just a "documentary record" of the 1934 annual party convention. Early on, we see the F■hrer's motorcade driving through Nuremberg, with what seems like the entire citizenry jammed on to the streets to greet him. Riefenstahl's camera shoots Hitler (if you'll forgive the expression) from directly behind him, a sequence which for some reason always reminds me of Gore Vidal's boast that only very famous people such as himself know what the back of their heads look like. There's a fabulous moment when the great man -- Adolf, not Gore -- is responding to the Hitler salutes offered up by the crowds with his campy little elbow-bend and wrist-flip and, as his Mercedes moves forward, the sun catches his fingers and fills the palm, first bathing it in glory and then making it appear as if the F■hrer's hand is the very source of the sunlight itself. Did the director just get lucky? Did the sun just happen to hit? Seconds later, we cut to a long shot of Hitler in the Mercedes continuing down the street. There's no camera in the car, although the scene we've just witnessed could only have been filmed by someone in the back seat. Another minute goes by, and we're back to the close-up of the F■hrer's neck.

Did she stop the car, get out and film the long shot, and then get back in? Did Leni get Adolf to do re-takes? Or maybe she made the entire population of Nuremberg re-take the scene; maybe they staged the procession twice. If Hitler was unusually agreeable about taking direction, it was because this was never a filmed record of an event so much as an event created for the film. Whatever Triumph Of The Will is, it's not a documentary. Its language is that of feature films - not Warner Brothers gangster movies or John Ford westerns, but rather the supersized genres, the epics and musicals where huge columns of the great unwieldy messy mass of humanity get tidied and organized  and, if that isn't the essence of totalitarianism, what is? Riefenstahl has the same superb command of the crowd as Busby Berkeley, the same flair for human geometry (though Berkeley would have drawn the line at giving the gentlemen of the chorus as swishy a parade step as Hitler's personal SS bodyguard do).

The sets (that's what they are) that were built for Hitler's speeches blend Cecil B. de Mille with expressionist sci-fi: no party convention in Britain, Canada or even Obama's America ever offered its leader a stage like this. It exists in the same relationship to reality as, say, Berkeley's "Lullaby Of Broadway" sequence in Gold Diggers Of 1935: in that scene, the conceit is that the number's taking place in a nightclub, but, as the song continues and the dancers multiply and the perspective extends ever further into the distance, you realise that no nightclub anywhere on earth has a stage that vast. Riefenstahl stretches reality in the same way, beginning in the streets of old Nuremberg with the band serenading Hitler below the balcony of his ivy-clad hotel, and steadily abandoning human scale until the F■hrer is standing alone atop a giant stone block as thousands of standard-bearing party members march in formation below: extras on a set. In the 21st century, you can see Riefenstahl's influence in the work of George Lucas (Star Wars) and Paul Verhoeven (Starship Troopers), both filmmakers for whom the principal thrill of directing seems to be the opportunity it affords to subordinate the individual.

Filmed a mere 18 months into Hitler's rule, and only a few weeks after President Hindenburg's death removed the final remnant of the pre-Nazi state, Triumph played a critical role in establishing the sheer scale of the party's iconography. Riefenstahl was a genius: watch the opening, with Hitler's aircraft (he was the first politician with a campaign plane) descending through the clouds to the city below as if bearing a god to earth. She was one of the first to understand how to convey the unseen: thus, the shadow of the F■hrer's plane falls on the columns of Nazis marching up the street in Nuremberg.

She was let down by the Nazis' weak spot: people. Not the blond boy drummers of the Hitler Youth. Nor the adoring women, gazing at their F■hrer as enraptured as Hedy Lamarr in the heights of orgasm in Ecstasy. But in the Nazi bigshots, whom not even Riefenstahl can make look anything other than seedy and shifty. And the trouble with that Hitler salute is that on at least a couple of occasions it exposes an incredibly sweaty armpit. There are some things even a control-freak can't control.

Her directing career ended with the Third Reich. Had she been worse at making the Nazis look good, her insistence that she was no more than a hired hand might have been accepted. Instead, she found herself too toxic to get any project off the ground, until finally, at the age of 100, she got to release one last film, a simple undersea documentary. "Art is my life and I was deprived of it," said Leni Riefenstahl. Tough. Working in the German film industry, she saw that happen early on to innumerable Jewish film-makers. She was neither one of that select group of Nazi fanatics committed to industrial-scale slaughter, nor merely of that vast contemptible mass of Germans too indifferent to evil to object to it. Whatever her disclaimers, she made evil look better than it had any right to: a cautionary tale in the art of film.