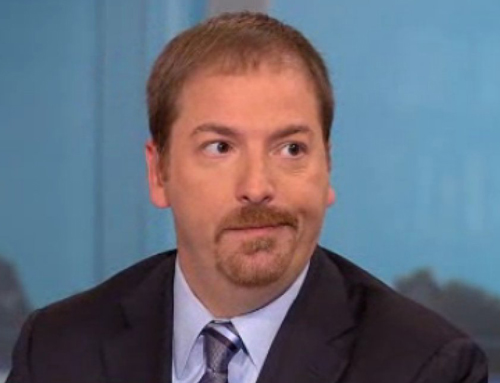 Among many talents exhibited by Chuck Todd in the days since he replaced David Gregory as host of "Meet the Press" is his ability to turn a proper noun into a verb.

"I'm not trying to Horatio Alger," Todd told my Post colleague Ben Terris. "But it's an advantage that I grew up middle class in South Florida" — where, he said, his father wasn't always fully employed and the whole family at times shared a mattress. "I feel like I understand that resentment that can build when the New York perspective or the Washington perspective doesn't seem to understand what's going on in America. Tim Russert had that advantage because he grew up a middle-class kid. I do think that helps."

Todd told Terris: "Most political journalism is insular to the Acela corridor, and my job is to channel that frustration of the rest of America."

The clear implication: Venerable "Meet the Press," under Gregory, had become a captive of inside-the-Beltway elites, and Todd was going to restore Russert's common touch.

In other interviews, Todd said that "we are in a bubble in Washington" and that the public justifiably believes that political journalists "don't get it, in the same way that Washington politicians don't seem to get what's going on in the rest of America."

NBC News' senior vice president Alexandra Wallace went so far as to say "I view Chuck as an outsider." To underscore the point, Todd launched a segment on his maiden show titled "Who Needs Washington?"

The answer: We all need Washington. And though it's standard for politicians to campaign against Washington, it's a bit cynical for Todd and "Meet the Press" to be vessels of populist outrage against a Washington media elite of which they are very much a part.

Todd is a big talent and a good guy. I've known him for 15 years, and I wish him success. But I hope he won't make it his show's role to perpetuate political Washington's self-loathing.

Washington isn't dysfunctional because people who live here are out of touch. Washington is broken because of the increasingly belligerent assortment of 537 politicians the rest of the country sends here. The problem is not that Washington is too insular. If anything, Washington isn't insular enough.

For most of the nation's history, lawmakers spent long stretches of time in the capital, getting to know each other as people rather than partisans. The friendships and goodwill they developed helped them to cut the necessary deals. But when "Washington insider" became a political liability two decades ago, politicians began jetting into town for three-day workweeks — long enough to demonize their opponents but not to know them.

And what of this cloistered club of the privileged here that doesn't understand real America? Most of the supposed media elite are, in my experience, products of the middle-class, like Todd and Russert, but also like Gregory and me.

Gregory grew up in Los Angeles' San Fernando Valley; his mother struggled with alcoholism when he was young.

He went to American University and worked in four Western cities and Chicago before covering politics in 2000. I am easily labeled as part of the Acela elite because I grew up on Long Island and went to Yale. I'm not trying to Horatio Alger, but I went to public schools, was brought up by a single mom (a schoolteacher who struggled to keep our house and car) and got through college on financial aid and a work-study job.

Todd has been a Washington denizen longer than either of us, working as a political reporter here for 22 years. And there's nothing wrong with that: It made him the expert he is. NBC News President Deborah Turness appeared to embrace this in her announcement last month, writing that "there is no one with a bigger passion for politics than Chuck." But then came the positioning of Todd as an outsider.

"Meet the Press" struggled for many reasons under Gregory, not least that he had the impossible task of succeeding Russert. But Gregory's trouble was not that he was a prisoner of the Beltway. He did shows from Afghanistan, Chicago and Des Moines, hosted the mayors of Atlanta and Baltimore, and did "Meeting America" segments from the road — but they weren't very popular.

Americans are rightly disgusted with how Washington works. I'm disgusted, too. But the solution is not to engage in self-loathing because we live and work here, or to pretend we're outsiders. The role of political journalists is to ask tough questions of the powerful, to expose to Americans why their government isn't working.

Todd does that well. He doesn't need to Horatio Alger.