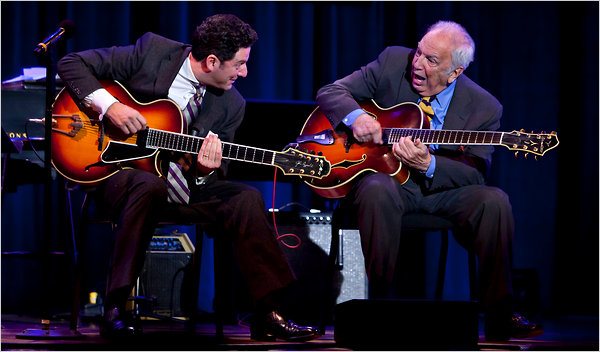 John Pizzarelli (L) and his dad, Bucky Pizzarelli, in concert

The esteemed guitar player kept strumming in the rain. His audience was around 30 people, down from the hundreds who had come to see him before the storm hit.

"What else?" he yelled, smiling.

Someone called a song. He began crooning.

"I've got you under my skin,

The crowd was crunched together, staying dry beneath a concrete overhang. A few feet away, it was pouring -- with occasional lightning and ear-splitting thunder -- yet the guitar player continued, undaunted.

"I'd sacrifice anything come what may

Let's talk about what's free. Really free. Last week, the global media gushed when Irish rock band U2 appeared at one of those Apple news conferences and announced a deal to distribute its latest collection of music, "Songs of Innocence," to every iTunes user in the world -- making it, as Apple CEO bragged, "the largest album release of all time."

By "free," of course, they mean you don't pay for the songs. If you have iTunes, you can simply download them. Critics were impressed. Fans came away thinking, "Wow, those guys are what music should be about."

Now, I admire U2's charitable efforts. No other rock band spends as much time on global issues.

But they're not wearing sackcloth. Their last tour was the richest in concert history, grossing . And for this latest deal, Apple reportedly gave them a huge fee, plus, according to , a marketing campaign worth nearly .

With an iTunes audience of half a billion getting its songs, U2 can expect to break its own money record when the band goes on tour again. And you, the consumer, while getting free U2 music, must go through the iTunes website and see all the ads for other products, which Apple hopes you will then buy. It's called a "loss leader."

Now, let's compare that with the guitar player above. His name is . He is 54, the son of well-known jazz guitar player , who's 88. Father and son came to two weeks ago for the annual Jazz Festival, which is free -- really free -- to all attendees.

John and his dad were scheduled to play a closing outdoor concert. But just a few songs in, a massive thunderstorm sent everyone fleeing. People ducked for cover. John, wearing a blue pinstripe suit and white bucks, waited it out in a tunnel. After a half hour, they officially canceled the show, and most wet patrons, fighting their umbrellas, raced to their cars.

Now, I happen to know John, so I went back to say good-bye. He felt awful about the fans not getting to hear more music, so he took his guitar out to the covered area and shook hands with the stalwarts waiting for the storm to pass.

Pretty soon, he started strumming the chords to "Avalon." Then he sang it. Then he did "They Can't Take That Away From Me" and "I Got Rhythm," throwing the lyrics to the crowd for a sing-along. He even did some amazing scat singing to his solos -- all while standing up, in the middle of a huddle.

Remember, this is Sunday night, outside, during a rainstorm, under a concrete stairway in . Song after song came off his guitar.

"Oh here's a good one," he said, then launched into "It Had to Be You," acknowledging the small applause by saying "Thank you, ladies' choice!" He got everyone singing and laughing and generally forgetting the fact that they were drenched.

He could have split. He'd fulfilled his contract. He could have said, "Hey, they didn't pay for tickets." Instead, he even played "The Wheels on the Bus" for two little girls. He performed for more than half an hour, and finished with the happiest little crowd you could imagine.

Nobody paid him extra. Nobody was filming it (although I see someone has posted it to YouTube). John is famous in the jazz world. He sells out nightclubs. He's played with everyone from to .

But on this night, he was an artist sharing his gift in the true meaning of "gift." Few people witnessed it. No one is talking about it. But I just figure, if we're going to celebrate U2 for a clever business venture, we could at least clap a few times for the damp but smiling guitar player, strumming his heart out in the rain.