In A World Where Hillary's In Charge, Does Hate Still Trump Governance? 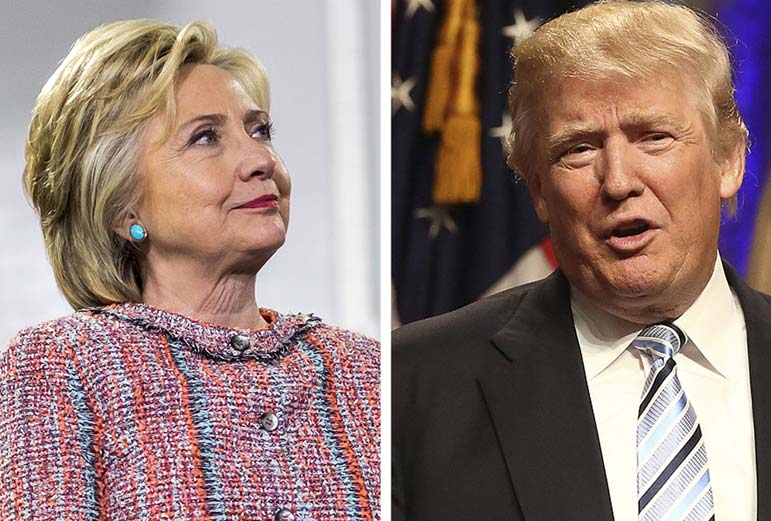 Melina Mara and Chris Goodney / The Washington Post and Bloomberg

With the news cycle on fire — protests in Hong Kong, mass shootings in America, a dead Manhattan billionaire whose suicide is the stuff of conspiratorial fantasies — the temptation is to wonder how our political daily discourse might differ had the 2016 election turned out otherwise.

The answer: maybe not as different as you might imagine.

Let's assume that, in a Clinton 45 Administration, Twitter is not a source of presidential venting and mischief-making. And perhaps Chelsea Clinton doesn't play an active and visible policy role in the White House, as does Ivanka Trump.

But Hillary still would have had a problem of her own making — namely, the man she chose to wed.

In a Hillary Clinton presidency, what does Bill Clinton do in his new role as the spouse of an incumbent? Assuming he sets up shop in the White House's East Wing as the nation's First Gentleman (or some other new title), does the nation's 42nd president carve out his own policy portfolio? Does he sit in on Cabinet meetings and work over members of Congress on his wife's behalf? Can the ex-president avoid the temptation to speak his mind in the same impromptu manner that complicated his wife's presidential runs? Given that he could get in the last word after-hours, in the White House's private residence, does Clinton 42 big-foot Clinton 45 staffers on policy and directives?

Then again, those are mostly Washington-insider plot lines.

Of a more national interest, when would Mr. Clinton's business dealings and personal life have become an image problem for the newly-elected president?

Switch 77,000 votes in Wisconsin, Michigan and Pennsylvania in November 2016 and Hillary Clinton goes from a 232 electoral-vote also-ran to the election's winner with 278 electoral votes.

But that small sliver of voters (over 136 million Americans went to the polls in November 2016) isn't enough to affect the balance of power in Congress. For the first two years of her presidency, Hillary Clinton faces hostile Republicans who not only want to bottle up her agenda, as they did with Barack Obama, but also want to dig into her husband's dealings. Welcome to week after week of hearings on the Clinton Foundation, uranium deals, and consultancy fees through shell companies.

Is that enough to start impeachment proceedings? Perhaps, if congressional investigators managed to tie the current president to the former — and decide to revisit Mrs. Clinton's private email server.

Fine, you say. Impeachment might still be on the table in a Trump-less Washington (I'm assuming Democrats don't take back the House in the 2018 midterm election).

But certainly the town would be less drama-driven.

Consider the world of judicial nominations. One of Clinton 45's first acts would have been filling the Scalia vacancy on the Supreme Court. Does she stick with Merrick Garland, or go with a bolder pick (during the fall campaign, Mrs. Clinton wouldn't commit to Garland and said the ideal candidate would "represent the diversity of our country, who bring some common-sense, real-world experience").

And what happens when Clinton 45 gets her second Supreme Court pick?

Senate Republicans, looking at the prospect of a sixth justice appointed by a Democratic president (two by Clinton 42, two by Obama, two by Clinton 45), likely don't go down without a fight. Let's assume that Mrs. Clinton is smart enough to anticipate this and thus offers a compelling figure in the choice of Ninth Circuit Court of Appeals Justice Jacqueline Nyguyen (fled Vietnam after the fall of Saigon, worked in her family's doughnut shop while attending law school, known as "The Smiling Assassin" as a federal prosecutor).

Does that confirmation hearing become the circus that was Brett Kavanaugh's time before the Senate Judiciary Committee? Probably not. But look at the list of Senate Judiciary members and ask yourself: how many senators would be seeking the 2020 GOP presidential nomination and thus go down the same theatrical route as did Senate Democrats with Kavanaugh?

Alright, so we still have impeachment and judicial media circuses as possibilities in a Washington led by Hillary Clinton. Surely, the media environment would be different.

Absent a Trump White House, the likes of MSNBC, CNN, The Washington Postand The New York Times would have to find a new chew toy (let's also assume that the "Grey Lady" doesn't have a record number of subscribers that it currently does thanks, in part, to its dogged criticism of Trump).

For Fox News and The Wall Street Journal, it's literally a different story. The former would work over Clinton 45 night and day, as it did the last two Democratic presidencies. Does the WSJ do to Huma Abedin or some other Hillary confidante what it did to Vince Foster?

The policy world does have different paths, in a Clinton 45 presidency. There's no talk of a U.S.-Mexico border wall. There likely is no trade war with China and no one-on-one with Kim Jong-un. Let's also assume that domestic presidential travel finds Mrs. Clinton in the same narrowly-decided swing states as Mr. Trump currently frequents. Can she brag about a vibrant economy? Assuming she doesn't go down the same deregulatory path as Trump, is economic growth what it is today?

This isn't to suggest that a world without a Trump presidency is any better or any worse.

Rather, it's to imply that much of what bothers us most — the partisan vitriol, the daily screaming headlines and over-reactions — likely aren't much different.