Trump better hope voters don't tire of all the drama 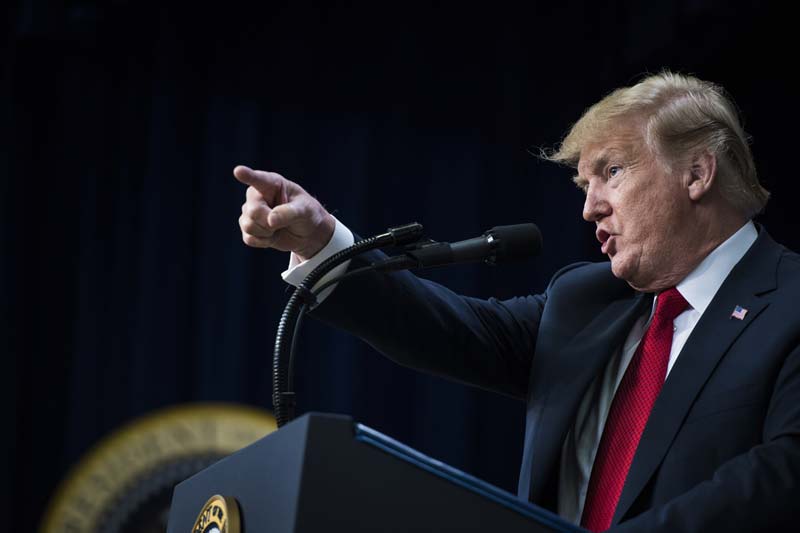 We are in Week Two of President Trump and Anthony Scaramucci, his communications director of six days, feuding on Twitter and cable TV.

The Trump-Scaramucci smackdown has, at times, distracted from the Trump-Denmark fight, which has been eclipsed, in its turn, by the Trump-Omar/Tlaib battle that has somehow morphed into a clash between Trump and Jews who vote for Democrats.

This is only a schematic account of events of the past few days that leaves out minor controversies over Trump retweeting a supporter calling him the King of Israel, Trump insulting the Federal Reserve chairman, Trump retweeting a suggestion that a federal prisoner might have been assassinated by one of his predecessors and Trump blasting Fox News over an unfavorable poll.

Trump makes the hyperactive, voluble Teddy Roosevelt, whom H.G. Wells called â€śa big noise," seem shy by comparison. He makes the wrathful Andrew Jackson, who nearly blew up his administration over how the wives of his cabinet members were treating the wife of his secretary of war, look like a paragon of calm and caution.

Trump reportedly told aides before taking office that they should think of each presidential day as a TV show, a goal that turns out to have been too modest. Trump acts like he needs to produce enough programming to fill a 24-hour news network, with outrages, melodrama, legal fights and endless plot twists that are, indisputably, ratings gold.

Obviously, the fundamentals will be most determinative of Trump's fate in 2020. Is the economy still growing? Are we at peace? How does the trade war with China stand? But the backdrop to it all will be the level of public tolerance for, or exhaustion with, Trump's antics and provocations.

In other words, can Americans bear for the show to go on? The threat to Trump isn't Trump Derangement Syndrome, an affliction of opponents whose hysteria actually bonds Trump's supporters to him even more strongly. The threat is Trump Fatigue, a condition that could spread more broadly and make swing voters harder to reach.

Never before has the late Â­Andrew Breitbart's axiom that â€śpolitics is downstream of culture" seemed more apt. The culture of celebrity, reality television and Twitter now defines national politics at its highest level.

The latest high-profile spats are characteristic of the Trump era. The fight with Scaramucci has a performative aspect you'd expect of two showmen. One is the master, a former reality-TV host who cashed in his notoriety for the presidency. The other is an up-and-comer, who made the most of his proximity to the master, including a brief appearance on a reality-TV show himself (and whose wife may yet get on â€śThe Real Housewives of New York City").

The Greenland flap is classic, too. The notion of buying Greenland is funny, like a story line from a political spoof. Trump's enemies don't understand how entertaining his fans find this kind of thing. Then, somehow, it becomes a real diplomatic incident, with hurt feelings on both sides and a presidential trip to Denmark canceled for now (although usually these disputes are papered over when the glare of the controversy abates).

Finally, the fight over Reps. Ilhan Omar and Rashida Tlaib's trip to Israel implicates the cluster of real issues that Trump's presidency has brought to the fore — including national identity and the right of a nation-state to control who enters — but in a highly symbolic manner. It wouldn't have mattered much substantively whether Omar or Tlaib had gone on their trip or not, but its cancellation occasioned a fierce, roiling debate.

All these controversies fill the hours while nothing much really happens. Is Scaramucci actually going to organize a primary challenge to Trump? No. Is Greenland going to be sold, or Denmark fall off as a US ally? No. Is Israel's fate going to rise or fall on the travels of a couple left-wing backbench congresswomen? No.

There's no doubt that the constant Trump static hurts him grievously among suburban, college-educated women. But no doubt that for his supporters the show is part of his appeal, an ongoing reminder of his fearlessness and opposition to the establishment.

What's the political balance for Trump? I believe it's negative, but sometimes I wonder. What FDR was to the age of radio and Reagan to the age of network TV, Trump is to the age of the screen, when we crave constant distraction, adrenaline rushes and entertainment. The problem with the return to normality promised by Joe Biden or, say, a Michael Bennet is that what's normal might well have unalterably changed.

Even if Trump is hurting himself with his sensory-overload Â­approach to the presidency, the Democrats nominate someone dull at their own risk.