Jeffrey Epstein, the Chicago hit man and the need for conspiracy theories 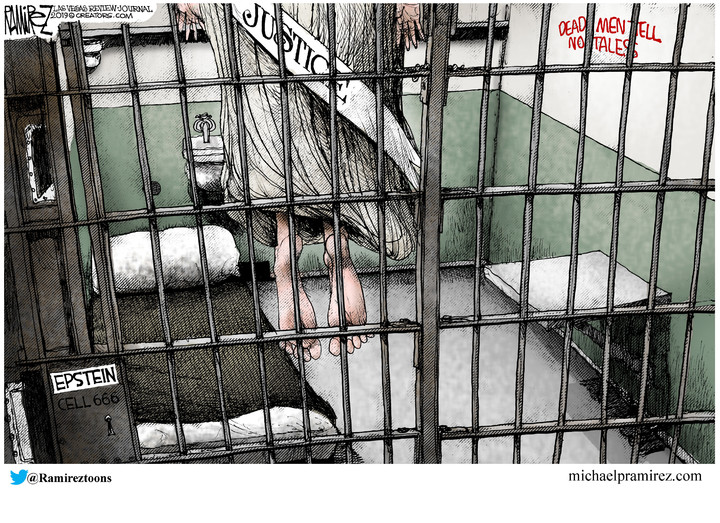 Except for the fact that both men reportedly committed suicide in the federal lockup, Scarpelli years ago, in 1989 in Chicago, and Epstein just the other day in New York. And in both cases, there were power players on the outside, worrying about what they'd say.

Today, just as then, the conspiracy theories run wild. Sex, power, politics and intrigue. And Epstein kills himself after his lawyers had him taken off suicide watch? How perfectly convenient.

Who believes in coincidences?

Scarpelli wasn't some weak Fredo. He killed people he was told to kill. He robbed Brink's trucks and squeezed whimpering deadbeat gamblers. He loved his work, which was all about visiting violent force upon others weaker than he.

When the bosses worried that hit man Billy Dauber and Dauber's mouthy wife, Charlotte, would talk to the FBI, Scarpelli and his cowboy crew called "The Wild Bunch" tailed Dauber's car after it left his lawyer's office. It was the middle of the day when they blasted Dauber off the road outside Chicago. They cut them to pieces with automatic weapons, shotguns and rifles.

Epstein was a wealthy man with powerful friends. His disgusting hobby was all about inflicting himself upon young girls and stealing their innocence.

Scarpelli was a thug who killed for money. Epstein purred like a vampire and dedicated himself to a life of stealing young souls.

Epstein's world involved billionaires and politicians, and that fantasy sex island that the FBI raided the other day. His infamous jet, the "Lolita Express," counted among its passengers many of the powerful, including former President Bill Clinton, a most frequent flier.

Immediately after Epstein was pronounced dead, the conspiracy theories began. Even President Donald Trump, acting as conspiracy theorist-in-chief, hinted in a retweet that the Clintons might have had something to do with it.

Like Clinton, Trump knew Epstein, and once had said nice things about him, but years ago Trump had Epstein barred from his Florida club, Mar-a -Lago, reportedly for approaching young women.

After Epstein's death, I received an email from a retired Chicago homicide detective. In his day, he investigated many of the city's heater cases, too many murders to count. The Chicago FBI didn't trust the Chicago Police Department, because Chicago's chief of detectives, William Hanhardt, was the mob's main man.

But the detective who emailed me was trusted by the FBI, so much so that he'd been a member of the federal Organized Crime Task Force. When Scarpelli was arrested, he had a bag of guns, including a British machine gun and magazines loaded with 9 mm hollow points. He planned to shoot his way out of any arrest and leave cops and FBI agents dead on the ground.

Once caught, he began talking. Word got out, as it always does. He was found dead on the shower floor in the Metropolitan Correctional Center in Chicago, asphyxiated by plastic bags he'd collected from waste baskets. And the detective was brought in to investigate. He told me about it in that email.

"When I was in the FBI Task Force a really bad guy, Outfit hit man, high profile prisoner Jerry Scarpelli killed himself in the MCC.

Scarpelli had been the target of a major OC (organized crime) case. Major effort to get this guy. He was captured in a sting operation. Dangerous dude. FBI SWAT team. FBI snipers, the works. SOB was carrying a machine gun. He never got to use it.

A mob underling had come over and was cooperating. Had information that would put Scarpelli away for life. FBI and Justice hoped Scarpelli would take down some really big names to save himself.

He was no rat. He was not going to spend his life in prison.

Another Homicide Detective and I were sent in to conduct the investigation. No agents.

It was a suicide. Conspiracy theories reigned. All coming from people who did not know squat."

I didn't have a newspaper column then, but when I began writing this column, I'd write occasionally about Scarpelli. He'd already started to flip, and he was in that in-between world, between the Outfit and the feds. The Outfit was worried.

Try holding your breath and see what happens. The life inside of you would compel you to rip the bag off your head. But I've since learned inmates bent on killing themselves can find a way. Perhaps by twisting a bedsheet anchored to the bed or the door around their neck, then rolling on the floor. As it tightens, they lose consciousness and die.

But still, I don't believe Scarpelli killed himself. And Epstein? Let's wait for the facts.

"I don't blame you," the retired detective told me. "When you're dealing with federal agencies with three letters for their name, you're not alone."

Why do we love conspiracy theories?

For psychic protection. Even those of us who'd rather die than be caught reading those wretched supermarket tabloids still look at the headlines, as the steak and arugula roll by.

Generation upon generation of corrupt and cynical leaders have taught us that those who believe in coincidence are fools. And so, we build alternate realities from the dust and mud of discredited institutions.

We use them like armor to shield us from the world.