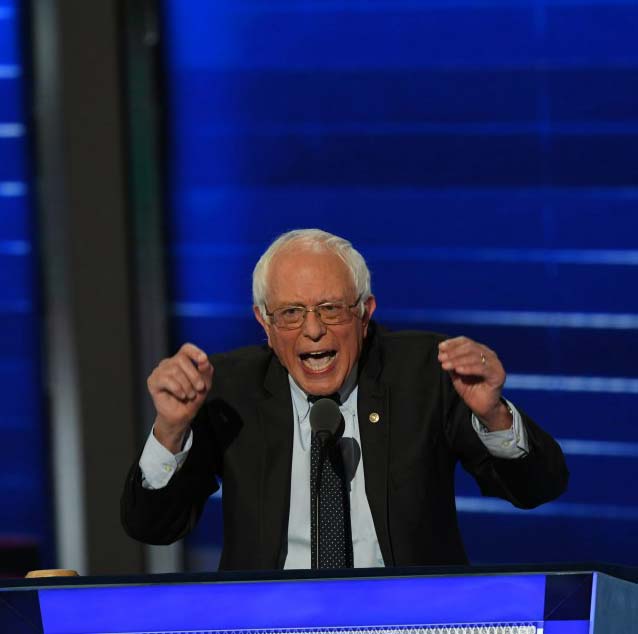 "It is no secret that we must transition away from fossil fuels. Period," declared would-be Democratic presidential nominee Bernie Sanders at a town-hall event in California on Thursday. "End of discussion," he added. "There ain't no middle ground here."

Suddenly, a bright line in the Democratic field. By proposing a $16.3 trillion dollar "Green New Deal" via a New York Times interview, Sanders, an independent senator from Vermont, confronted every climate activist with a stark choice. Former vice president Joe Biden has offered a plan to stop emissions that racks up a $1.7 trillion price tag. Sen. Elizabeth Warren, D-Mass., saw Biden and raised her bid to a $2 trillion plan! Then Sanders walks in and says, in essence, "That is nothing, nothing! You are throwing pebbles at a battleship!" He didn't say that actually, but he did say, "There ain't no middle ground."

Which means of course that Biden and Warren, along with South Bend, Indiana, Mayor Pete Buttigieg, Sen. Kamala Harris, D-Calif., and even industrialist and destroyer-of-the-Earth-turned-climate-activist Tom Steyer are all pikers when it comes to taking the apocalypse seriously.

Sanders isn't pretending. And if you take that doomsday scenario seriously, he has given you no choice. Get on the Bernie Bus or be exposed as a climate-change-activist poser.

Recall the 1998 end-of-days flick "Armageddon." Nobody fussed about the cost of Bruce Willis's mission to save the planet from an approaching asteroid. More to the point, the pencil-necked accountants didn't drive President Franklin D. Roosevelt's wartime spending or the U.S. military's vast expansion led by his Army chief of staff, George C. Marshall.

They were facing the Nazis in Europe and imperial Japan in the Pacific. Imagine running against Roosevelt for the nomination in 1944 on a platform of slashing war spending by 90%! So Sanders has proposed what the rhetoric of climate-change apocalypse demands: All hands on deck, and damn the torpedoes, provided you don't use any fossil fuels in mounting your charge.

This is no mere "carbon tax," no "cap and trade." Sanders's program mocks the Paris climate agreement, though not openly. Sanders is the real deal. And he just flanked the Democratic field for every voter who genuinely believes in the Alexandria Ocasio-Cortez 12-year countdown to the end of the planet.

No self-respecting climate-change activist can win an argument for Biden or Warren now, not when Sanders has lapped them eight or 10 times in the fictional commitment game. What are they going to say? Our program can get through Congress and Sanders's can't? None of them can, unless the country is persuaded that this whole "existential threat" stuff is real. Sanders believes it. He put our money where his mouth is.

Those of us who acknowledge the temperature of Earth has indeed increased a degree or so in the past century, who believe humans contribute to that increase - perhaps significantly and, if so, mostly these days by the Chinese and the Indians who show no intent to stop emitting carbons as they have billions of mouths to feed - are all for mitigation and adaptation. Many of us strongly support nuclear power as the key to replacing carbon emissions.

See on this point the new book by Daniel Poneman, President Barack Obama's deputy energy secretary, "Double Jeopardy: Combating Nuclear Terror and Climate Change." If you are serious about slowing climate change, you have to be for nuclear power, Poneman concludes. (Similarly, nuclear power production need not result in weapons proliferation, but that's another subject.) Poneman's a true believer that carbon emissions must be curtailed, but his program is detailed, incremental and balanced. That's not Bernie.

And, now, he got them. Sanders went all in.

If you really think the world is on the edge of catastrophe, are you going to waste your vote on a pretend climate-change "policy," or go all in with Sanders?

I'm hoping Sanders is the nominee. A choice, not an echo campaign on climate change, is what we need. "There ain't no middle ground." Let's put that to the people in a Bernie Sanders-Donald Trump vote.

Sweep aside the pretenders and get to the candidate who is genuinely serious about changing everything to save Mother Earth. That's Sanders. By about 14 trillion bucks total.