What protests in Russia and Hong Kong can teach us 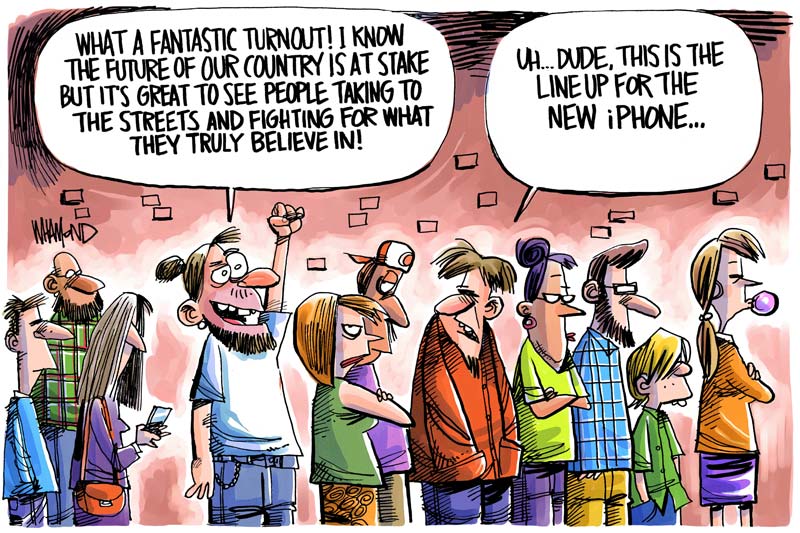 In Britain, one of the world's oldest democracies, politicians now speak in an offhand way about "proroguing" Parliament - asking the queen to suspend Britain's House of Commons - as a way of resolving the unresolvable problem of Brexit.

Nor is the problem confined to the Anglo-Saxon world. A couple of years ago, two political scientists, Yascha Mounk and Roberto Stefan Foa, looked at the numbers in a now famous article and found that the number of people who believe that it is "essential" to live in a democracy has slipped in almost every Western country. The trend is especially pronounced among the young.

Among Swedes born in the 1930s and 1940s, just to take one random example, more than 80% believe democracy is "essential."

Among Swedes born in 1980, however, the figure has fallen to 60%. At the same time, several established democracies, from Hungary to India, have begun dismantling fundamental institutions and principles, including independent courts - a democratic deconsolidation that doesn't even arouse the interest of this U.S. administration.

It's a gloomy picture. It's also too simple. Even while the news at home gets constantly worse, we are simultaneously living in an era when the ideals of democracy have never burned more brightly, especially among younger people - at least those who live in autocracies. Here is a paradox: In two of the most authoritarian countries on the planet, unprecedented pro-democracy demonstrations are now unfolding, inspiring precisely the same generation that is bored by democracy in the West.

In Hong Kong, thousands of young people, most of whom no longer remember the years of British rule, are defying police brutality to make their voices heard. Having learned from the mistakes of the "Occupy" movement of 2014, they have created whole new set of tactics to oppose a new law on extradition, learning to "be water" by constantly shifting the sites and styles of their protest, one day blocking major roads, another day rendering the airport dysfunctional. Constant, overwhelming propaganda from the Chinese authorities appears not to be working: Opinion polls show that the majority of Hong Kong people - including the vast majority of young people - don't sympathize with the regime and don't even feel "Chinese," a shift in sensibility that helps to explain protesters' bravery.

In Russia, where propaganda also attacks the West and derides democracy as chaotic and anarchic, protesters have focused very directly on the most fundamental of democratic institutions: They are demanding the right, simply, to vote for independent candidates in local elections.


Just as in Hong Kong, Russian protests are being led by younger people, none of whom can remember any other leader except Vladimir Putin: "I am 20 years old, and in my entire life there has not been a single day of freedom," one of them told reporters, according to Meduza, an independent website that covers Russia. They, too, are well organized, using up-to-the-minute apps to keep in touch with one other, deploying a phalanx of lawyers and a carefully planned social media campaign. Like the young Hong Kongers, young Russians aren't just dedicated; they are organized, thoughtful and well prepared.

There are some obvious explanations for this East-West paradox. Clearly, the inhabitants of stable democracies find it hard to appreciate what they have: "You don't know what you've got 'til it's gone" isn't just a song lyric; it's an expression of something fundamental about the human brain. Like wealth, or health, political freedom may simply be something that people don't value if they've always had it.

But it may also be that the young protesters of Russia and China are simply ahead of us. We've gotten used to the idea that political influence flows from West to East, but are we so sure that is still true? A generation of Eastern dissidents has thought harder than we have about how to self-organize, about how to operate in a world run by secretive, kleptocratic elites who go out of their way to create distraction and apathy. Remember that they, too, are fighting regimes that seem in hock to moneyed interests and wrestling to cope with the pace of technological change.

It may be that we in the West simply haven't thought about what tactics ordinary people need to deploy to compete in a world where money is offshore, power is invisible and apathy is widespread. It may be that we need to learn from people who have.